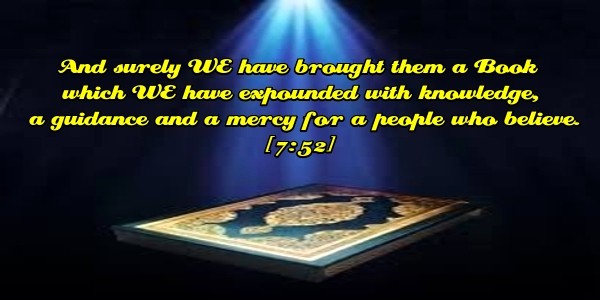 And surely WE have brought them a Book which WE have expounded with knowledge,
a guidance and a mercy for a people who believe.  [7:52 - Sher Ali]

'Abdullah ibn 'Abbas related that Abu Sufyan ibn Harb sent him to Heraclius, the Byzantine Emperor, and he called for the letter of the Messenger of Allah which Dihya had brought to the governor of Busra, who in turn passed it on to Heraclius. He read it out, saying, 'In the name of Allah, the Merciful, the Compassionate, from Muhammad, the slave of Allah and His Messenger, to Heraclius, ruler of the Byzantines. Peace be upon the one who follows guidance. I call you to Islam. If you become Muslim, you will be safe and Allah will double your reward. If you turn away, then you incur the wrong action of your subjects. "O People of the Book! Come to a proposition which is the same for us and you (to His words) Bear witness that we are Muslims." (3:54)'"  [Al-Adab Al-Mufrad, English translation : Book 44, Hadith 1109]