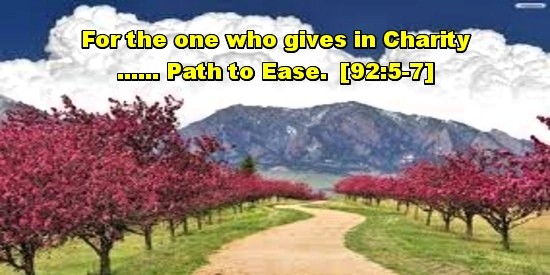 [Bukhari, Book #24, Hadith #491] “ Narrated Abu Huraira Allah's Apostle said, "If one gives in charity what equals one date-fruit from the honestly-earned money and Allah accepts only the honestly earned money --Allah takes it in His right (hand) and then enlarges its reward for that person (who has given it), as anyone of you brings up his baby horse, so much so that it becomes as big as a mountain”

[Bukhari, Book #60, Hadith #469] “Narrated 'Ali: We were in the company of the Prophet in a funeral procession at Baqi Al-Gharqad. He said, "There is none of you but has his place written for him in Paradise or in the Hell- Fire." They said, "O Allah's Apostle! Shall we depend (on this fact and give up work)?" He said, "Carry on doing (good deeds), for everybody will find it easy to do (what will lead him to his destined place)." Then he recited: 'As for him who gives (in charity) and keeps his duty to Allah, and believes in the Best reward from Allah (i.e. Allah will compensate him for what he will spend in Allah's way). So, We will make smooth for him the path of ease. But he who is a greedy miser....for him, the path for evil.”