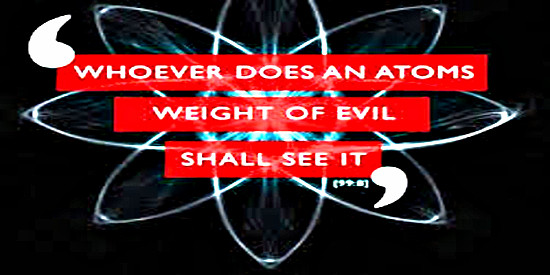 WHOSOEVER DOES AN ATOM’S WORTH OF EVIL, WILL SEE IT.

[Hadith – Bukhari, Book #56, Hadith #839] “Narrated Abu Huraira: The Prophet said, "A horse may be kept for one of three purposes: for a man it may be a source of reward; for another it may be a means of living; and for a third it may be a burden (a source of committing sins). As for the one for whom it is a source of reward, he is the one who keeps his horse for the sake of Jihad in Allah's Cause; he ties it with a long rope on a pasture or in a garden. So whatever its rope allows it to eat, will be regarded as good rewardable deeds (for its owner). And if it breaks off its rope and jumps over one or two hillocks, even its dung will be considered amongst his good deeds. And if it passes by a river and drinks water from it, that will be considered as good deeds for his benefit) even if he has had no intention of watering it. A horse is a shelter for the one who keeps it so that he may earn his living honestly and takes it as a refuge to keep him from following illegal ways (of gaining money), and does not forget the rights of Allah (i.e. paying the Zakat and allowing others to use it for Allah's Sake). But a horse is a burden (and a source of committing sins for him who keeps it out of pride and pretence and with the intention of harming the Muslims." The Prophet was asked about donkeys. He replied, "Nothing has been revealed to be concerning them except this comprehensive Verse (which covers everything) :--'Then whosoever has done good equal to the weight of an atom (or a small ant), Shall see it (its reward) And whosoever has done evil equal to the weight of an atom (or a small ) ant), Shall see it (Its punishment)."

[Hadith, Muslim, Book #005, Hadith #2163] “Abu Huraira reported Allah's Messenger (may peace be upon him) as saying:......................... The horses are of three kinds. They are a source of reward to a person, they are a covering to a person, and they are a burden to a person. As for those which bring reward is that a person would get reward who rears them for the sake of Allah and trains them for Him, and nothing disappears in their stomachs but Allah would record for him a good deed. And if they were to graze in the meadow, they would eat nothing but Allah would record for him a reward. And if they were to drink water from the canal, with every drop that, would disappear in their stomachs there would be reward (for the owner). He went on describing till a reward was mentioned for their urine and dung. And if they pranced a course or two, there would be recorded a reward for every pace that they covered. As for one for whom they are a covering, he is the man who rears them for honour and dignity but does not forget the right of their backs and their stomachs, in plenty and adversity, As regards one for whom they are a burden, he is that who rears them for vainglory and showing off to the people; for him they are, the burden. They said: Messenger of Allah, what about asses? He said: Allah has not revealed to me anything in regards to it except this one comprehensive verse:" He who does an atom's weight of good will see it, and he who does an atom's weight of evil will see it"

[Hadith – Malik’s Muwatta, Book #21, Hadith #21.1.3] “Yahya related to me from Malik from Zayd ibn Aslam from Abu Salih as-Samman from Abu Hurayra that the Messenger of Allah, may Allah bless him and grant him peace, said, "Horses are a reward for one man, a protection for another, a burden for another. The one who has them as a reward is the one who dedicates them for use in the way of Allah, and tethers them in a meadow or grassland. Whatever the horse enjoys of the grassland or meadow in the length of its tether are good deeds for him. If it breaks its tether and goes over a hillock or two, its tracks and droppings are good deeds for him. If it crosses a river and drinks from it while he did not mean to allow it to drink it, that counts as good deeds for him, and the horse is a reward for him. Another man uses his horse to gain self reliance and up-standingness and does not forget Allah's right on their necks and backs (i.e. he does not ill treat or over-work them). Horses are a protection for him . Another man uses them out of pride to show them off and in hostility to the people of Islam. They are a burden on that man." The Messenger of Allah, may Allah bless him and grant him peace, was asked about donkeys, and he said, "Nothing has been revealed to me about them except this single all-inclusive ayat, 'Whoever does an atom of good will see it, and whoever does an atom of evil, will see it.”