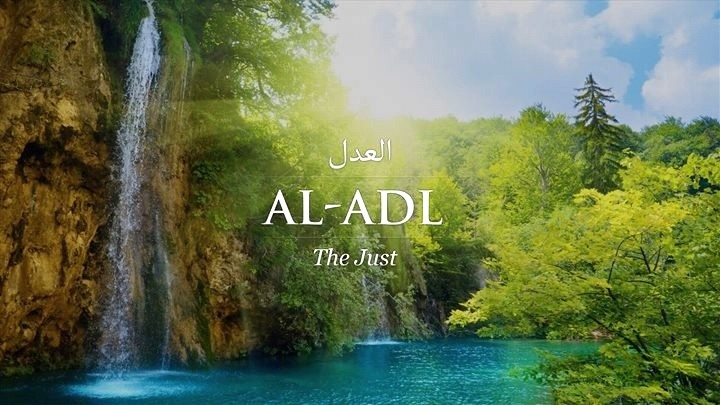 [In Allah’s creation there is no extremism, immoderation or contradiction; the earth is most rightly and justly spaced apart from the sun]

Things are said to be right and just if they stand between two controversial extremes. An electric switch, for example, is usually located in a place where all members of the family can easily use it. We describe such location as being right and just when it is properly located, does not lend itself to extremism.

How God Is All-Just?

1- Regarding His creation, if man were made to see all living microscopic creatures that exist in water, he would abstain from drinking it. If the human eye were given the power to see all things, our life would be not only miserable but also unbearable; and if the human eye were made too weak to see dangerous things around us, we would not be able to survive. Both cases symbolize improper deviation from the right and just work of the human eye. Therefore, Allah, Most Gracious, is All Just in His Creation not only of the human eye but all other things as well.
Another example is the human ear, which is specially designed by the Lord, Allah, the All Just, to hear only the sounds that befit the human life on earth. There are a great many sounds that exist in the world, but we do not hear them. If we did, human life would be unbearable. Ordinary sound waves fade away, while electro-magnet ones do not. In this context, Allah, All Mighty, All Just, says:

Accordingly, your sight is made in due measures and so is your hearing. If your sense-nerves were made to grow more than they do, your life would be impossible. The same thing applies for your pressure-nerves as well as nerves that have to do with your vision, hearing, and movement: “O man! What has made you careless about your Lord, the Most Generous, Who created you, fashioned you perfectly, and gave you due proportion? In whatever form He willed, He put you together.” [Al-Infitar 82; 6-8]

In Allah’s creation there is no extremism, immoderation or contradiction.

Thus, Allah, the All Just, has created you - your senses, parts, organs, apparatuses, and systems - in a right just way and in due measures and proportions. Allah’s rightness and justness are also manifested in all other things.

3- The length of the day and the night, the distance between the sun, the moon and the earth, and the size of the moon and the earth are all most rightly and justly designed: “Say (O Muhammad): ‘Tell me! If Allah made the night continuous for you till the Day of Resurrection, which god besides Allah could bring you light? Will you not then hear?’

Say: ‘Tell me! If Allah made the day continuous for you till the Day of Resurrection, which god besides Allah could bring you night wherein you rest? Will you not then see?’”
[Al-Qasas 28; 71-72]

If the earth were five times greater than it actually is, your weight would be five times greater than it is, and your movement on the surface of the earth would be unbearable. This is because man’s weight is proportional with the size of the earth; and man’s weight on the moon’s surface is 1/6th of his weight on the earth. Therefore, the size of the earth, its density, its power of gravity, and its distance from the sun and the moon while going round the sun in orbit, are all most right and just.

4- As for crops: if wheat were made to get ripe successively like melons, for example, we would need to check spikes of grain one by one in order to see if they have ripened or not. However, all spikes of grain need three months to ripen and are harvested altogether at one time. As for fruits, they ripen successively.

Allah is “Al-‘Adl” (the All Just) that He is most just in His creation; i.e. He creates all things most rightly and justly, and with utmost divine wisdom and justness: “And it is He, Who has created the heavens and the earth in the truth, and on the Day (of Resurrection) He will say: ‘Be!’ and it will be.” [Al-An’am 6; 73]

5- Just contemplate your own body and food, and then contemplate camels and other animals! In this context, Allah, the All Just, says: “Then let man look at his food.” [Abasa 80; 24]
“So let man see from what he is created! He is created from a liquid gushing forth, proceeding from between the backbone and the ribs. Verily, He (Allah) is Able to bring him back (to life).” [At-Tariq 86; 5-8]

6- Allah is “Al-‘Adl” (the All Just) as manifested by His divine command. He commands you to fast for thirty days, i.e. the whole month of Ramadan, every year. If He commanded you to fast for six months, it would be unbearable. This is because the last days of the month of Ramadan seem so long and hard, as if each day were a whole month. The fast in Islam is only for thirty days, which is right and just. Allah, the All Just, commands you to perform prayer only five times a day. If prayers were fifty, and each one was made up of fifty rak’as (units of prayer), it would also be unbearable. In this context, Allah says:
“Allah burdens not a self (person) beyond its scope.” [Al-Baqarah 2; 286]

Even it is permissible for you to break the fast. To this, Allah, the All Just, says:“(Observing the Fast is) for a fixed number of days; but if any of you is ill or on a journey, the same number (should be made up) from other days.” [Al-Baqarah 2; 184]

Therefore, the fast is right and just and so is the Zakat (almsgiving), which is only 2.5% of man’s wealth. The Hajj (Pilgrimage to Makkah) is also imposed on Muslims only one time in man’s lifetime. Hence, the Islamic religion is all right and just.

7- Not only Islamic rituals but also Islamic commandments and teachings are all right and just. Consider Allah’s command: “Tell the believing men to lower some of their gaze (from looking at forbidden things).” [An-Nur 24; 30]

Allah is All Just in His creation, commands, and acts; and we, as true believers, should stand in the middle between two illaudable extremes, exaggeration and negligence.

If Allah, the All Just, commanded us to lower all our gazes, altogether, it would be unbearable, as sometimes we are unintentionally taken by sudden surprise at seeing something indecent or unlawful, which makes us lower our gaze after 1/10th of a second. This is most fair and just.

To Know Allah the All-Just

1- All things belong to Allah. Whatever He takes away is definitely His, and whatever He gives, out of His grace, is also definitely His. If you firmly believe in this fact, you have no problems in the life of this present world.

Therefore, when we get to know Allah’s divine name “Al-'Adl” (the All Just), we know how to color ourselves with such good qualities and manners that please our Lord, Allah, in the light of this divine name of Allah. That is why religious scholars say that we should beware of extremes of both exaggeration and negligence. We should always be moderate, be right and just.

2- In times of anger, you should be careful of both reckless courage and weak cowardice, as they are both illaudable extremes. You should stand somewhere in between recklessness and cowardice: “O you who believe! Be steadfast witnesses for Allah in equity, and let not hatred of any people seduce you that ye deal not justly. Deal justly, that is nearer to your duty. Observe your duty to Allah. Lo! Allah is informed of what you do.” [Al-Ma’idah 5, 8]

3- You should also be careful not only of being cunning, malicious, tricky, or sly, but also of being naïve, stupid, or idiotic i.e. in a right and just position between illaudable extremes of exaggeration or negligence. In this context, Allah says: “And thus, We have made you a moderate nation, that you may be witnesses over mankind, and that the Messenger (Muhammad) be a witness over you.” [Al-Baqarah 2; 143]

4- As manifested in His divine acts, you should know for sure that Allah’s absolute divine justice dominates the whole universe. However, you might be asked: someone is honest, trustworthy and straightforward in his business. But suddenly, he might be unjustly fined. Is not this apparently both unjust and unfair?! The answer to this question is: This particular incident is, on the face of it, unjust and unfair. But if you go deeper into the man’s life with his family, children, neighbors, those who are inferior or superior to him, if you take all things into consideration, you will certainly find absolute justice in that which has happened to him.

To wrap up, Allah is All Just in His creation, commands, and acts; and we, as true believers, should stand in the middle between two illaudable extremes, exaggeration and negligence, in all of our attitudes and deeds.