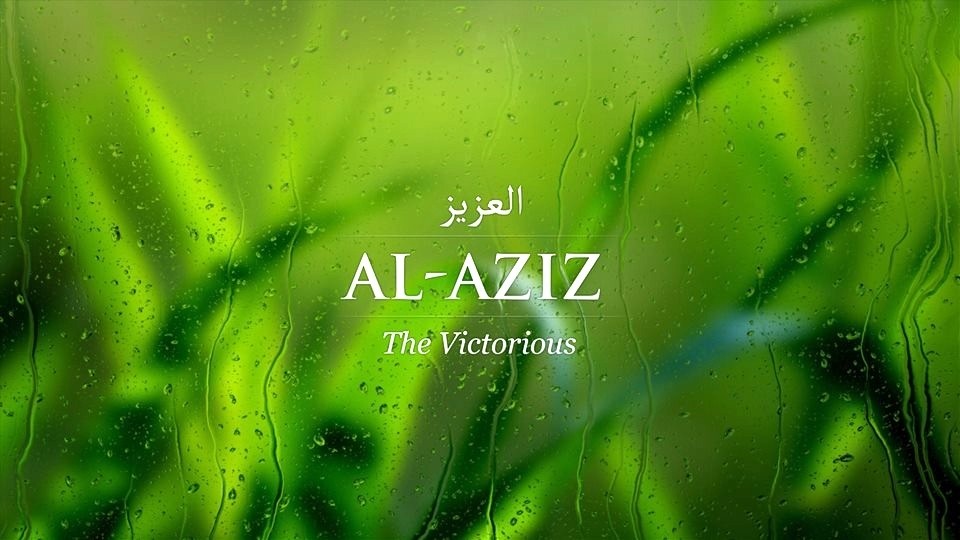 
Allah alone is “Al-Aziz” because existence and survival of all things depend on Him
“Al-Aziz” (the All-Mighty) is a quality of God’s perfection since being “Aziz” (All-Mighty) is that He is one and only so that everything needs Him so badly for everything, that He is too difficult to reach, none could ever encompass Him in knowledge, not even Prophets, for no one knows God except He, Himself. Thus, a man can only reach Him as a created slave of His.

A king is ”Aziz” (mighty and honorable): If he has all matters under his control, and if all of his subjects, young and old, venerable and disreputable, go to him for their affairs. In other words, the more needed you are, more Aziz (the mightier and more honorable) you are.

Often repeated at the end of the Quranic verses: {And He is Al-‘Aziz (the All-Mighty), the All-Wise}. God’s divine name “Al-‘Aziz” occurs in many Quranic verses, such as when Jesus said in the Quran: {If You punish them, they are Your slaves, and if You forgive them, verily, You, only You, are Al-Aziz (the All-Mighty), the All-Wise.} (Al-Ma’idah 5: 118)

Another verse is: {And His (Alone) is the Majesty in the heavens and the earth, and He (Alone) is Al-Aziz (the All-Mighty), the All-Wise.} (Al-Jathiyah 45: 37) And a third verse is: {They (the hypocrites) say: ‘If we return to Madinah, indeed the mightier will expel from it the less mighty.’ But ‘Izah (might, honor and power) belongs to Allah, to His Messenger and to the believers, but the hypocrites know not.} (Al-Munafiqun 63: 8)

This name is one of God’s names of “Tanzeeh” (names that denote His being free from any anthropomorphic elements).

This name belongs to names of “As-Sifat” (Names that are Attributes of God).

“Al-Aziz” is the Mighty and forceful, as derived from the Arabic word “Azza”, which means “reinforces and makes stronger”.

3- “Al-Aziz” is the Mighty and forceful, as derived from the Arabic word “Azza”, which means “reinforces and makes stronger”. To this effect God says: {When We sent to them two Messengers, they belied them both; so We ‘Azzazna (reinforced them) with a third. And they (the Messengers) said: ‘Verily, we have been sent to you as Messengers.} (Yasin 36: 14) This meaning of God’s name “Al-Aziz”, the All-Mighty, the All-powerful, also belongs to names of “As-Sifat”.

If something becomes so rare that it becomes only one, unique, it becomes the most “Aziz”, which is a paramount quality of perfection and is given only to God, alone, who is the one and only creator, who is so badly needed by all things and who is too difficult to reach. Therefore, God, alone, deserves to be called “Al-Aziz” in Arabic.

God says: {Allah: there is no god but Him, the Ever Living, the One Who sustains and protects all that exists.} (Al-Imran 3: 2) In other words, existence and survival of all things are in God’s hand, for He is the source of life and survival for all things.

7- God is “Al-Aziz” the “All-Mighty”, some scholars say, in the sense that He, in the oceans of whose Majesty the minds get drowned, whose graces and blessings cannot be properly enumerated or conceived, whose perfection and beauty cannot be described by human tongues. Prophet Muhammad (peace be upon him) summed up the whole thing as follows:

Narrated Abu Hurairah on authority of Aishah: “I missed Allah’s Messenger from my bed one day. I searched for him, and my hand touched the soles of his feet while he was on the floor prostrating himself to the Lord, invoking: ‘O Allah! I seek refuge in Your Contentment from Your Wrath, in Your Forgiveness from Your Punishment; and I seek refuge with You from You. I cannot praise You enough, for You are as You praised Yourself.’” (Muslim)

Hence, if you know God as “Al-‘Aziz” and obey Him, it is impossible for you to humble yourself to anyone else. This is because God says: {But honor, might and glory belong to Allah, His Messenger and believers, but the hypocrites know not.} (Al-Munafiqun 63: 8)