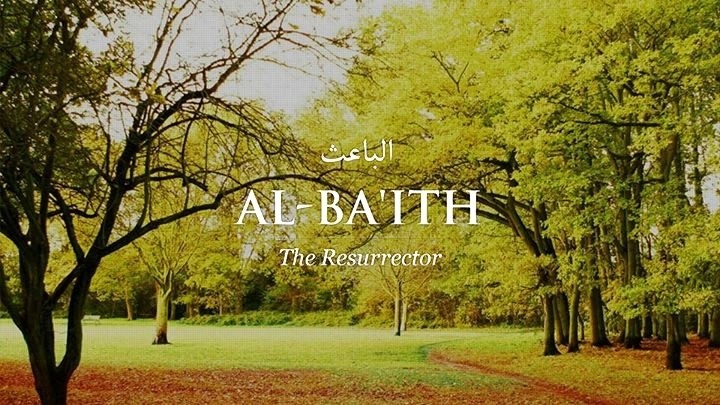 The Resurrector, He who gives life to all creatures on the judgment day.

The Awakener,  The Resurrector,  The Arouser,  The Dispatcher

The One who chooses who shall awaken and who shall be sent forth.

From the root b-'a-th which has the following classical Arabic connotations:

to call forth, awaken
to raise up from sleep or death
to resurrect
to delegate, consign
to send, send out, make manifest

The term Bâ'ith is not specifically used as a Beautiful Name in the Qur'ân.


[ALLAH'S Quran - 22:5-6 - Asad]
O Men! If you are in doubt as to the truth of resurrection,
remember that, verily, We have created every one of you out of dust,
then out of a drop of sperm, then out of a germ-cell,
then out of an embryonic lump complete in itself and yet incomplete,
so that We might make your origin clear unto you.
And whatever We will to be born We cause to rest
in the mothers' wombs for a term set by Us,
and then We bring you forth as infants
and allow you to live so that some of you might attain to maturity;
for among you are such as are caused to die in childhood,
just as many a one of you is reduced in old age to a most abject state,
ceasing to know anything of what he once knew so well.
And if, O man, thou art still in doubt as to resurrection, consider this:
thou canst see the earth dry and lifeless --
and suddenly, when We send down waters upon it,
it stirs and swells and puts forth every kind of lovely plant!
All this happens because God alone is the Ultimate Truth,
and because He alone brings the dead to life,
and because He has the power to will anything.
Al-Hajj 22:5-6, tr. Asad