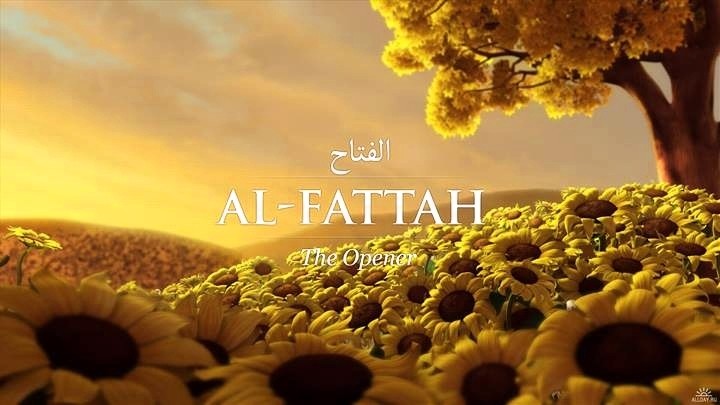 “Al-Fattah”, an emphatic name of God, means that God is the one who opens all of the gates that no one but Him can open.

The emphasis that this name can be both qualitative and quantitative, i.e. He opens all of the gates of profit and sustenance for His slaves no matter how difficult to open, or how numerable, such gates might be.

In Arabic, the word “Fataha” means, “to open something closed”. Your relationship with God’s Divine name “Al-Fattah” (the Opener of the gates of profit and sustenance) is that whenever a gate is closed in your face, you should remember this Divine name of God and ask Him to open it for you.

If God so wills, He opens the door of His mercy; but if He so wills, He withholds it as no one else can grant it after Him. Therefore, the whole matter is in God’s Hand and under His Divine control.

2- The second meaning of God’s Divine name “Al-Fattah” is that He is the Just Judge, who judges among His human slaves, i.e. every time a dispute arises among them; He opens the gates for its solution and settlement.

This meaning is derived from the Quranic verse:
{We should have invented a lie against Allah if we returned to your religion after Allah rescued us from it. And it is not for us to return to it unless Allah, our Lord, should will. Our Lord comprehends all things in His Kingdom. In Allah (Alone) we put our trust. Our Lord! Judge between us and our people in truth, for You are the Best of those who give judgment.}
(Al-A’raf 7: 89)

In such cases “Al-Fattah”, is the judge, who has the just judgment, who knows reality of people. To this effect, the Quranic verse goes:
{Our Lord! Judge between us and our people.}

If you believe that God is “Al-Fattah”, the just judge, the one who exalts and debases, the one who unveils all facts and brings all things to light, the one who removes all misunderstandings and misconceptions, and the one in whose Divine Hand is the absolute good, you should never worry or be anxious even if people misunderstand you or think badly of you or even heap false accusations against you for trivial reasons. In this context go God’s words addressing Prophet Muhammad (peace be upon Him):
{So put your trust in Allah; surely, you are on manifest truth.} (An-Naml 27: 79)
and: {Say, ‘Allah (sent it down).’ Then leave them to play in their vain discussions.}
(Al-An’am 6: 91)

If you are in a noble condition that makes you worthy of God’s Divine honor and mercy, the whole world is forced to come to you.

In a Divine Hadith, God addresses man: “O My slave! I created for you the heavens and the earth; and creating them did not tire me. Does a loaf of bread tire me to send you every now and then? You owe me an obligation and I undertake to grant you provision. If you fail to fulfill the obligation that you owe Me, I shall not withhold My provision to you. (I swear) by My Divine Might and Majesty! If you are not contented with that which I allot to you, I shall give power to the present world over you: you will run therein as brute animals run in the wild, but you will get not from it except that which I have allotted to you, and I do not care, and you will be worthy of dispraise in My Sight!”.

That is why Prophet Muhammad used to invoke: “O Allah! Make the best (part) of our life its end and the best (day) of our days the day on which we encounter You while You are well pleased with us.”

In the same context a similar Quranic invocation goes:
{And with Him (Allah) are the keys of the Unseen, none knows them but He. And He knows whatever there is in the land and in the sea: no leaf falls down without His knowledge thereof, and no grain in the darkness of the earth nor anything fresh or dry is but written in a Clear Record.} (Al-An’am 6:59)

If you are in a noble condition that makes you worthy of God’s Divine honor and mercy, the whole world is forced to come to you.

To that a true believer is included in God’s Words:
And seek forgiveness of your Lord and turn to Him in repentance that He may grant you good enjoyment, for a term appointed, and bestow His abounding Grace to every owner of grace. But if you turn away, then I fear for you the torment of a Great Day.} (Hud 11: 3)

3- Another meaning of God’s Divine name “Al-Fattah” is that He opens the gates of His mercy to true believers and casts His Divine light into their hearts and knowledge into their minds. This is what scholars usually call “Al-Kashf”“Ira’ah”(Showing). In this context, God says:
{Thus did We show Abraham the kingdom of the heavens and the earth that he be one of those who have Faith with certainty.} (Al-An’am 6: 75)

In the same context, God addresses Prophet Muhammad (peace be upon him):
{When there comes (to you) the Help of Allah and the Opening (i.e. of victory and conquest over disbelievers)…} (An-Nasr 110: 1)

5- Also, Al-Fattah who helps you in distress and grants you His Divine favors and blessings. In case of hardship, He helps you; and in case of ease, He grants you more and more. Hence, He is Al-Fattah, the Opener of the gates of profit and sustenance.

6- God is Al-Fattah: He opens to you the gates of knowledge; He opens to you the gates of wisdom and makes it run on your tongue. If you are truthful and sincere to God, He makes wisdom run on your tongue. The first kind of opening is that God opens to you religious knowledge. Then, He opens to you gates of worldly affairs: you are poor, but He enriches you; you are weak, but He empowers you; you are oppressed or defeated, but He grants you victory over your enemies; you are depressed, but He removes depression from you and replaces it with happiness and delight. Therefore, if man turns away from Allah, he can never attain happiness. To this effect, God says: {But whosoever turns away from My Reminder: verily, for him is a life of hardship, and We shall raise him up, on the Day of Resurrection, blind.} (Ta-Ha 20: 124)

7- “Al-Fattah” also means that He opens to you the gate to be intimate to Him; to turn to Him with love and devotion; He opens to you the gate to His good pleasure and contentment, whereby you are contented to live even in a single room in the basement saying: “Praise belongs to Allah.”
However, God may open to a poor person the gate to contentment, thankfulness, and peace of mind. In full gratitude to Him he says, “Praise belongs to Allah. I am very well. I am very happy.” A person who does not know God, is always unhappy and discontented even if he were the richest person in the world.

God opens all closed gates. He also opens to His slaves the gates to success and Divine help. To this effect, the Quranic verse goes: {And my guidance (and success) cannot come except from Allah. In Him I trust, and unto Him I repent.} (Hud 11: 88)