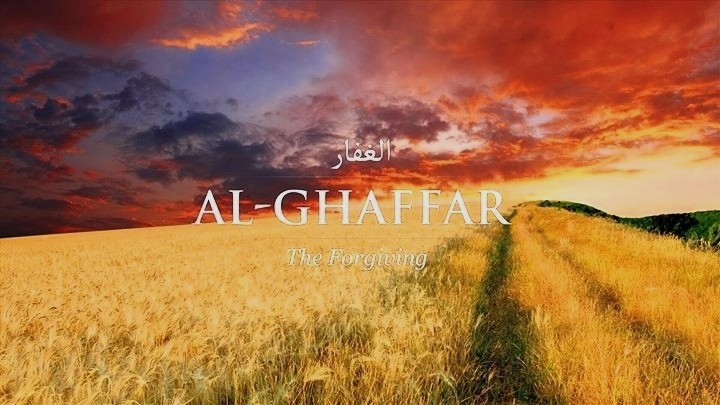 [“Al-Ghaffar” denotes differences in quantity, quality and frequency of occurrence in the sense that He is both Oft-Forgiving and All-Forgiving.]

God’s name “Al-Ghaffar” (The All-and Oft-Forgiving) comes in the Quran under three forms which mean that God forgives all kinds of sins everywhere and at all times as He is the Oft-and-All-Forgiving, the Most Merciful.

The first form of this attribute is “Ghafir” God says: {Ghafir (the Forgiver) of sin, the Acceptor of repentance, the Severe in punishment, the One Who Bestows (Favors). There is no god but He, to Him is the Final Return.} (Ghafir 40: 3)

The third form of this divine name is “Al-Ghaffar” as in God’s words: {And verily, I am Al-Ghaffar (the All-Forgiving) for him who repents, believes and does righteousness and is moreover rightly guided.} (Ta-Ha 20: 82), and: {I said: ‘Ask forgiveness of your Lord, (for) verily, He is Ghaffar (All-Forgiving). He will send rain to you in abundance, and give you increase in wealth and children, and bestow on you gardens and bestow on you rivers.} (Nuh 71: 10-12)
Thus, “Ghafir”, “Ghafour” and “Ghaffar” are all used to the same purport in the Quran, for they are derived from the same Arabic root, “Al-Maghfirah” (Forgiveness).

Some scholars said: “A person who disobeys Allah is described in the Holy Quran as being “Zhalim”, “Zhaloum” or “Zhallam”.

Another example:
{Truly, We did offer the Trust to the heavens and the earth and the mountains, but they declined to bear it and were afraid of it. But man bore it; verily he was Thalouman (i.e. unjust to himself) and ignorant.} (Al-Ahzab 33: 72)

In other words, the way man commits sins or does wrong to himself determine the way in which God responds and forgives such sins or wrong-doings.

Another delicate point regarding God’s name “Al-Ghaffar” is that the verses in which this name is mentioned include verbs in the past form, as shown in God’s words:
{He (David) said: ‘He has wronged you in demanding your ewe in addition to his ewes; and verily, many partners oppress one another, except those who believe and do righteous good deeds – and such are few.’ And David guessed that We have tried him and he sought Forgiveness of his Lord, and he fell down prostrate and turned (to Allah) in repentance. So, We forgave him that, and verily, for him is a near access to Us and a good place of (final) return (Paradise).} (Sâd 38: 24-25)

They also include verbs in the present form, as explained in God’s words:
{Verily, Allah forgives not that partners should be set up with Him, but He forgives other than that to whom He wills. And whoever sets up partners with Allah has indeed invented a tremendous sin.} (An-Nisa’ 4: 48).

Whatever sins mankind commit, regardless of quality or quantity or time or place of their occurrence, God forgives such sins, except for one unforgivable sin.

They also come in the imperative form, as in:
{Our Lord! Verily, we have heard the call of one (Muhammad) calling to Faith: ‘Believe in your Lord!’, and we have believed. Our Lord! Forgive us our sins and expiate from us our evil deeds, and make us die as pious and righteous.} (Al-’Imran 3: 193),

1- Linguistically speaking and concerning such variation of word-forms, God’s name “Al-Ghaffar” denotes differences in quantity, quality and frequency of occurrence, for He is “Ghaffar” in the sense that He is both Oft-Forgiving and All-Forgiving. In other words, whatever sins mankind commit, regardless of quality or quantity or time or place of their occurrence, God forgives such sins, except for one unforgivable sin, namely associating other gods with Him in worship, which is by no means forgivable, as He says:
{Verily, Allah forgives not that partners should be set up with Him, but He forgives other (sins) than that to whom He wills. And whoever sets up partners with Allah has indeed invented a tremendous (unforgivable) sin.} (An-Nisa’ 4: 48)

In this context, God also says:
{Whosoever does deeds of righteousness, it is for (the benefit of) his own self; and whosoever does evil, it is against his own self. And your Lord is by no means unjust to His slaves.} (Fussilat 41: 46)

2- If a man willingly turns to God in repentance, he guarantees His protection, honor and support to himself. But if he refuses and fails to respond, he will be afflicted by torment from where he does not reckon. That is why God says:
{O you who believe! What is the matter with you?! When you are asked to march forth in the Cause of Allah, you cling heavily to the earth! Are you pleased with the life of this present world rather than the Hereafter?! But little is the enjoyment of the life of this world as compared to the Hereafter. If you march not forth, He punishes you with a painful torment and replaces you by another people; and you can not harm Him at all, and Allah is Powerful over all things.}
(At-Tawbah 9: 38-39])

3- The Arabic word “Ghafara” linguistically means “to cover or hide”, hence God is “Al-Ghaffar” in the sense that He keeps your innermost thoughts and intentions hidden from other fellow humans. Therefore, your innermost feelings, intentions, thoughts and ambitions are well-protected and well-covered.

4- Another meaning of God’s name “Al-Ghaffar” is that He covers man’s ugly inner body with a nice-looking skin. Without an outer skin man’s body would look very ugly. In other words, man’s inner muscles and innermost parts would look horrible if they were on the surface of his body. But by Allah’s Grace, the outer skin makes man’s face and body look beautiful. By “ugly” He means a man’s evil thoughts as lots of ugly thoughts visit his mind: thoughts of evil things, thoughts of committing sins.

Due to His infinite divine mercy upon believers in Paradise, God veils all their sins and misdeeds.

5- God is “Al-Ghaffar” that He veils a believer’s sins and misdeeds and does not show them. For that, if a believer were to see the evil things that he formerly did when he was ignorant and heedless, he would get burnt of regret. When a believer turns to God with repentance, He forgives him and his sins. But if he were to remember the evil things that he did in times of ignorance, he would bite his fingers of regret.

Therefore, due to His infinite divine mercy upon believers in Paradise, God veils all their sins and misdeeds, so that neither they nor anyone else can see any of such sins or misdeeds.
That is why God says:
{The Forgiver of sin, the Acceptor of repentance, the Severe in punishment, the Bestower of Favors, there is no god but He, to Him is the Final Return} (Ghafir 40: 3)

In interpretation of the above Quranic verses, some scholars said: {Allah forgives sins out of His Bounty; He accepts repentance out of His Grace; He is Severe in punishing disbelievers; and He bestows His Favors upon those whom He loves.}

Thus, on the Day of Judgment, you find that all your sins and misdeeds have been obliterated altogether: from the Scrolls of your deeds, from the Records of the Angels, and from your own mind. That is why you are made to live in utmost never-ending bliss in God’s Paradise, the breadth of which is the heavens and the earth.