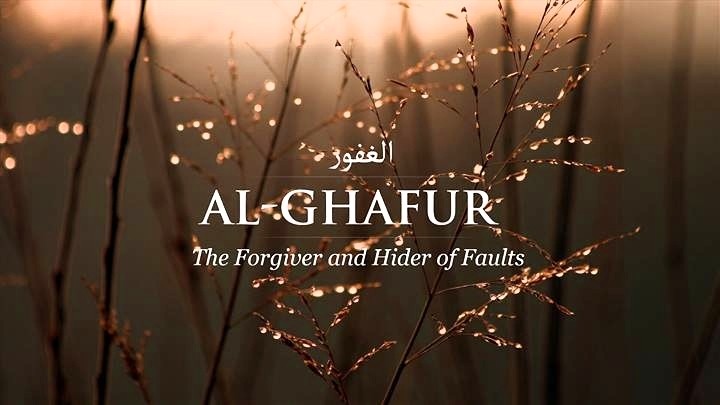 The One who veils or forgives our faults and sins such that they are not seen by anyone else, not even the angels.


From the root gh-f-r which has the following classical Arabic connotations:

to cover, veil, conceal, hide
to pardon, to forgive, to set aright
to cover a thing to protect it from dirt

Note that the root gh-f-r has given rise to three Beautiful Names that are all used in the Qur'ân: Ghaffâr, Ghafûr and Ghâfir. However, only Ghaffâr and Ghafûr were included in the list of 99 Names narrated by Tirmidhi.

In Qastalânî's commentary on Bukhârî, it is said that the root gh-f-r means a covering or protection which is either between man and the commission of sin [protecting, or watching over], or between sin and the effects of that sin [forgiving, veiling or concealing].

The Arabic word astaghfirullâh (sometimes written as astghfrallâh, estagfurullâh or estaferallâh) is from this same gh-f-r root, and is an invocation of Divine Protection having a range of possible connotations that include Allâh please forgive me, Allâh please hide away my faults, Allâh please watch over me and protect me from faults.

The Arabic lexicon and commentary Tâj al-'Arûs reminds us that truly asking for forgiveness must be by both word and deed, not by the tongue alone.

The names Ghafûr, Ghaffâr and Ghâfir denote forgiving or protecting, while 'Afûw indicates complete removal or obliteration of the condition.

(Also written as al-ghafur, al-ghafoor, the Forgiving, ya ghafur, ya ghafoor)