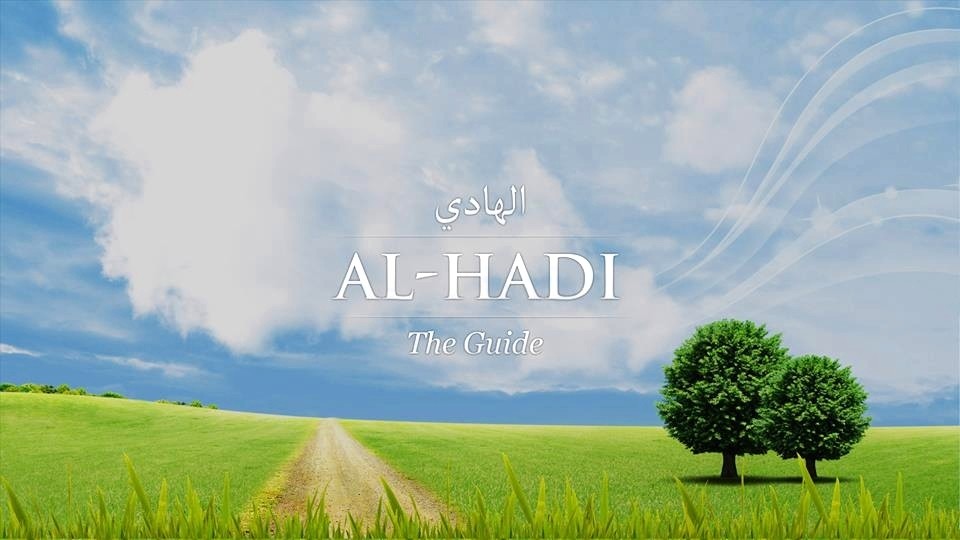 [The universe leads to God simply because it puts us face to face with God’s infinite divine power, might, wisdom, mercy, knowledge, creativity.]

God has created the universe and provided it with His divine light.
The word “Hadi” (The Guide) is derived from the Arabic word “Hada”(guide). God “Al-Hadi” says:

{And Allah invites to the Home of Peace and guides whom He wills to the Straight Path.}
(Yunus 10: 25)

The straight path is a kind of way and God has given man the ability to make his own choices; and whosoever desires guidance; God guides him to a way that leads to the abode of peace for which man has been created. For that he has been given the ability to make his own choices. If he chooses the abode of peace (paradise) God guides him to the way that leads him to it.

The same the word “Hidayah” means guidance to the truth; Imam Al-Junaid said: “The words ‘guide us to the Straight Path’ mean: ‘O Lord! Make our hearts inclined towards You! Make all our work for You! And guide us unto You!’”
For that man has been given a free will to make his own choices in life. God says:

How Does God guide His Slaves?

1- The first and widest gate of guidance to God is His creation, and in this sense His divine name “Al-Hadi” (The Guide) is derived from His divine act of guidance.

God says: {Say: ‘Behold all that is in the heavens and the earth.’ But neither Signs nor warnings benefit those who believe not.} (Yunus 10: 101)

Hence, the universe leads to God simply because it puts us face to face with God’s infinite divine power, might, wisdom, mercy, knowledge, creativity, etc. In other words, God guides us by means of His creation: {Then let man look at his food.} (‘Abasa 80: 24)

{Then let man look from what he has been created. He has been created from a gushing liquid, coming forth from the backbone and the ribs. Verily, He (Allah) is Able to bring him back (to life)!} (At-Tariq 86: 5-8)

2- God’s words (the Quran) are another gate of guidance; sometimes, you look at a wonderful thing whose maker tells you that he has made it for such and such purpose and that the raw materials from which he has made it are of the best quality. In other words, the maker gives you direct information about his make directly from him.

Therefore, God’s divine name “Al-Hadi” (The Guide) is derived from His divine Self as possessing the attribute of speech. In that way, God guides man by His divine words:

{And among His Signs is the creation of the heavens and the earth and whatever moving living creatures He has dispersed in them both. And He is All-Potent over their assembling whenever He wills.} (Ash-Shura 42: 29)

About the Quran, God says: {All Praise belongs to Allah, Who has sent down to His slave (Muhammad) the Book (the Quran) and has made no crookedness therein.} (Al-Kahf 18: 1)

3- There are also events and incidents ‘divine acts’; things that happen, rain that falls down, droughts volcanoes, earthquakes …etc, that lead you to God.In this context, God says:

{Then there passed by on it (the garden) a visitation (fire) from your Lord at night and burnt it while they were asleep.} (Al-Qalam 68:19)

Sometimes, a harvest that is worth hundreds of millions of pounds is devastated by frost in three minutes. Just as the universe tells about God and the Quran tells about His divine religion, God has divine acts like frost, winds, hurricanes, floods, volcanoes, earthquakes, diseases, epidemics, droughts, poverty, oppression, …etc that tell about Him. Consider the following verses:

{And your Lord would never destroy the towns wrongfully while their people were good-doers.} (Hud 11: 117)

This is a kind of non-verbal teaching. He says:

4- Divine inspiration is another way by which God guides you as, sometimes, He inspires you to enter a certain mosque in order to offer prayers; but you find a great number of people attending a religious lecture, so you sit and listen, and you find so many interesting things that keep you attracted to the mosque and devoted to it. These are all kinds of divine inspirations.

5- Good dreams are undoubtedly further kind of divine guidance. Sometimes, people have good righteous crystal clear dreams in their sleep. Such dreams motivate them to be more obedient and dutiful to God. To this, Prophet Muhammad (peace be upon him) says: “A good righteous dream is one part, out of forty-six parts, of Prophecy.”

Thus, if God desires to teach you something directly and without the need for any inference, contemplation, or awareness on your part, or any divine acts as indicated by this verse:

6- Also, God sometimes guides you by making you meet, quite accidentally, another person, who tells you something or provides you with certain information that leads to your guidance. In other words, when I meet someone who tells me something, I should wonder, one way or another, “Who has made me meet such person?” It is certainly God who has! “Who has made such person say what he said?” It is God. “Who has inspired such person?” It is certainly God. When you are not on the right way, and someone comes to show it to you, you should firmly believe that God has made such person come and show you the right way. This is another kind of divine guidance, namely by means of other fellow humans.

7- Feelings of spiritual comfort or discomfort are is another gate of guidance. For example, sometimes you intend to travel somewhere; but when you are about to leave, you suddenly feel uncomfortable, or comfortable, about it; and also you find that things go on smoothly and easily or awkwardly and most difficultly.

8- Also, God sometimes makes man unable to think or make a decision about something, but He drives him to do it easily though unintentionally. In this context, God says:

{Glorify the Name of your Lord, the Most High, Who has created (everything) in perfect proportion, and Who has decreed and guided, and Who brings out the pasturage and then makes it dark stubble.} (Al-A’ala 87: 1-5)

1- General Divine Guidance
God has provided you with the sense of smell, for example, which enables you to distinguish the smell of gas, which is sometimes very dangerous at home. This means that He guides you by means of the senses, one of which is the sense of smell. You sometimes hear a noise in the next room and hence guess that there is somebody in it. This means that God guides you by the sense of hearing. Also, God has given you the ability to think and deduce, just as He has granted you knowledge, experience, and awareness.

2- Divine Guidance to True Faith
By virtue of this type of divine guidance, God guides mankind to Him, to His book, the Quran, and to the truth.

3- Divine Guidance to Success
Regarding this type of guidance God says: {We narrate unto you their story with the truth: Truly, they were young men who believed in their Lord (Allah), and We (Allah) increased them in guidance.} (Al-Kahf 18: 13)

4- Divine Guidance to Paradise
To that God says: {But those who are killed in the Way of Allah, He will never let their deeds be lost. He will guide them and set right their state, and admit them to the Garden (of Paradise), which He has made known to them.} (Muhammad 47: 4-6)