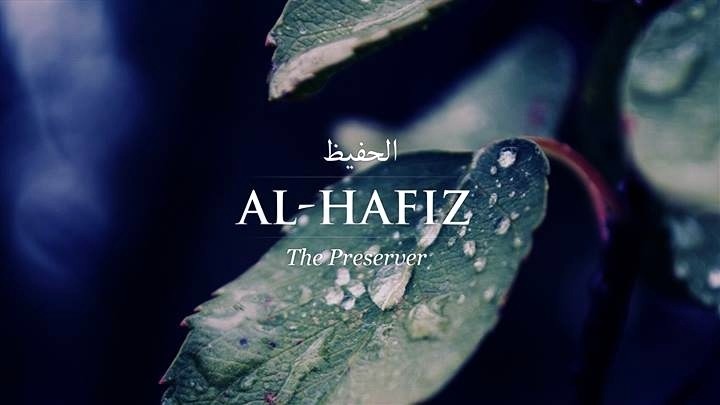 There are so many manifestations of the name ‘Hafiz’ in the universe that a person looking out from the window of reflection (tafakkur) can easily see the manifestations of this name of Allah’s on any living or non-living thing. As a person observes the names of beauty,‘Jamil and Jamal’, while looking at a very beautiful flower, he must also observe on it the name ‘Hafiz’ that is the source and the secret of how the beauty of this flower is preserved. Likewise, along with the name of majesty, ‘Jalal’, that is manifested upon a mountain, the name ‘Hafiz’ may also be clearly observed.

The name ‘Hafiz’ also means “the preserver of creatures from decay until their predetermined time of death (ajal)” If we consider it from this viewpoint, the preservation of all the creatures in the universe until their predetermined time comes is a manifestation of the name ‘Hafiz’. In addition, this name reminds the servants that they are protected and preserved by an Entity and that step by step they are getting closer to their ajal (predetermined time). In the ayah, Allah tells us: “For him are angels ranged before him and behind him, who guard him by Allah’s command….” (Ra’d, 13:11), and informs us that the protection of man is not in his own hands, but it is Allah the “Hafiz Dhul Jalal” who protects us. Imam Bediuzzaman Said Nursi in Risale Hashir (the Treatise on Resurrection, which is one of the four main topics in the Risale-i Nur Collection) explains it in the following way:

“Is it at all possible that God’s attribute of Preserver, which protects all things with the utmost order and balance – things in the heavens and on the earth, on dry land and in the ocean, dry and wet, large and small, commonplace and exalted – and as it were, sifts their results by way of accounting – is it at all possible that this attribute should permit the deeds and acts of man, man who has been given the lofty disposition of humanity, the rank of God’s supreme vicegerency, and the duty of bearing the Supreme Trust, not to be recorded, not to be passed through the sieve of accounting, not to be weighed in the balance of justice, not to be punished or rewarded fittingly, even though his acts and deeds closely pertain to God’s universal Sovereignty? No, it is not in any way possible!” (Risale-i Nur Collection / Dhulfiqar Book / Risale Hashir – 10th Word [Treatise on Resurrection] / The Seventh Truth)

Indeed, had there not been the manifestations of the name ‘Hafiz’ in the universe, weak and ajiz (powerless) non-living creatures would not have been preserved, and living creatures would not have been able to lead their lives. This is because, along with all the other names, but especially with the manifestation of the name ‘Hafiz’, the balance of the universe and all the needs required for life are provided until the predetermined time (ajal) comes, and all the activities that man has undertaken and all his deeds are recorded and saved to be used at a specific time.

Again in the Risale Hashir (Treatise on Resurrection) Imam Bediuzzaman shows us another meaning of the name ‘Hafiz’by stating the following: “The memory of man, the fruit of the tree, the kernel of the fruit, the seed of the flower – all of these demonstrate the universality and comprehensiveness of the law of preservation.” (Risale-i Nur Collection / Dhulfiqar Book / Risale Hashir – 10th Word [Treatise on Resurrection] / The Seventh Truth)

‘Hafiz’ also mean the preserver of various kinds of creatures, some of them in seeds, some in kernels, some in sperm. Ustadh Bediuzzaman explains in the Flashes Book (Lam’aat) how plants transfer the genetic structure in their seeds from generation to generation thanks to the name ‘Hafiz’ by saying: “Through the manifestation and bestowal of the Name of Hafiz (Preserver), each of the seeds preserves and shows without confusion or defect the legacy inherited from its parent and origins.” (Flashes Book [Lam’aat] / 17th Flash / 15th Note / Risale-i Nur Collection)

Bediuzzaman explains in the Mathnawi al-Nuriyya that all the deeds of mankind are recorded and preserved by saying the following: “Know, O friend, that the One Who preserves a fig tree’s seed while it is changing into a fig, and does not allow it to rot in the ground, so that it can grow into a fig tree – that All-Preserving and Protecting One, Who protects all other plants and animals – will not neglect the deeds of humanity, His vicegerent on earth.” (Mathnawi al-Nuriyya Book / Shamma (The 9th Treatise)/ Risale-i Nur Collection)

At the same time, Ustadh Bediuzzaman explains subtly that the recording of man’s deeds is not only for the purpose of witnessing on the Day of Judgment, as is hsown in the following excerpt from the Letters Book (Maktubat): “For example, the people of Jannah will surely desire to recall their adventures in this world and recount them to one another. They will be exceedingly curious to see the images and pictures of those adventures, and if they watch them as though they were watching a cinema screen, they will enjoy it immensely. Since that is the case, as the ayah, (عَلَىٰ سُرُرٍ۬ مُّتَقَـٰبِلِينَ )‘Joyfully, facing each other on thrones of dignity’ (Hijr, 15:47) indicates, there will be in Paradise, the realm of delight and happiness, the recounting of worldly adventures and scenes of worldly happenings, amid everlasting panoramas.” (Letters Book – Maktubat / 24th Letter / Second Station / Third Indication / from the Risale-i Nur Collection)

Just as people record the sweet moments they experience in the world in order to watch them and taste that same happiness again and again, insha’Allah the people of Jannah will also taste happiness when watching the sweet moments of their lives in the world that have been recorded by the manifestations of the name ‘Hafiz’, and also they will feel relieved that the hard and sorrowful days of their worldly lives are behind them.

Ya Hafiz! Preserve and protect us from the evils of jinn and humans, and help us in this world and in the akhirah (hereafter) with your beautiful name ‘Hafiz’. And make our feet steadfast in this religion. Amin. Amin Ya Mu’in.