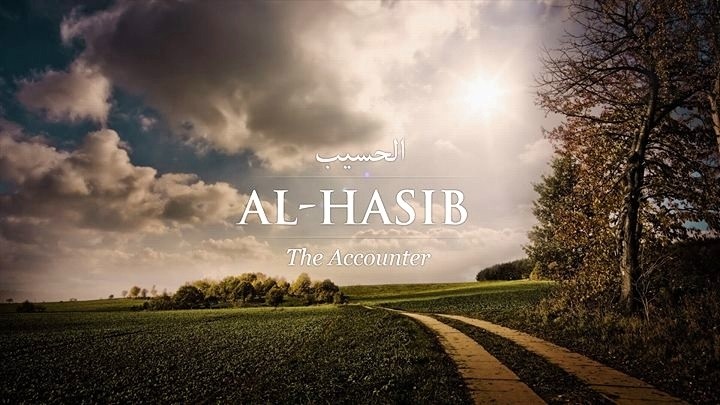 ALLAH: Al-Haseeb (The All Sufficient)

[Al-Haseeb is the Sufficient; the master you can count on or depend on]
The rewarding, the sufficient, the identical rewarding are some of the different meanings that God’s name “Al-Haseeb” stands for.

You say “someone is another one’s haseeb”, it means he is his rewarding, identical, or peer. Al-Haseeb also is: He who suffices, from sufficiency, God is the sufficient, you say: So and so honored me and sufficed me, which means he gave me to my satisfaction and gave over my need. To that God says:

{O Prophet! sufficient unto you is Allah, - (unto you) and unto those who follow you among the Believers.} (Al-Anfal 8: 64)

Also He says:
{And we shall set up the balances of justice on the Day of Resurrection, then none will be dealt with unjustly in anything. And if there be the weight of a mustard seed, We will bring it. And Sufficient are We to take care} (Al-Anbiya’ 21: 47)

You say: “God (Alone) is sufficient for us, and He is the best disposer of affairs (for us)” that means God suffices me, but your reckoning on God means that your account is on Him. The first meaning is the rewarding, the second is the sufficient and the third is the one who calls to account- from rivalry and similarity, from sufficiency, and the caller to account:
{Who delivered the messages of Allah and feared Him, and feared none save Allah. Allah keeps good account.} (Al-Ahzab 33: 39)

1- Most comprehensively considered meaning of “Al-Haseeb” is the Sufficient; the master you can count on or depend on, and there is no one as sufficient as He is; If you depend on the most powerful person in this world, he may die when you are in great need of him, or he may change suddenly without any reason, or he may neglect you.

You may depend or rely on someone who loves you, but he is weak, and cannot save you from what you are involved in. You may depend on a powerful person, but he does not love you, and you may depend on a powerful person who loves you, but you cannot reach him:
{If you invoke (or call upon) them, they hear not your call; and if (in case) they were to hear, they could not grant it (your request) to you. And on the Day of Resurrection, they will disown your worshiping them. And none can inform you (O Muhammad) like Him Who is the All-Knower (of everything).} (Fatir 35: 14)

Likewise, the Arabs used to say: “I visited so and so, he honored me but he did not suffice me. A woman asked a prince to give her from his money, he gave her generously, so those who witnessed said to him: “It would have been enough if you had given her a little and she does not know you, so the prince said: If she is satisfied with a little, I am not satisfied except with the plentiful, and if she does not know me, I know myself.”

2- God is “Haseeb” (the rewarding) in the sense that He grants you greatly, He satisfies His slaves and suffices them with all their provisions. It was mentioned in the divine Hadith: “O my slave, be to me as I want and do not inform me with what makes you better”.

God calls His creatures for account on the day of meeting Him, the judgment day and in this life; in life to educate them, and in the hereafter to punish them. God says:
{Then are men returned unto Allah, their protector, the (only) reality: Is not His the command? and He is the swiftest in taking account.} (Al-An’am 6: 62)

4- “Haseeb” is the honorable, the one who has the qualities of perfection, beauty and grace; you say: this is a house of ancestry and lineage in the common sense.

Who is the honorable one? He is the one who does not commit offences, who gives generously, does not lie, does not dissemble, does not humiliate others, and does not backbite. Whenever man rises above offences and wrongdoings, he becomes honorable, unlike what happens in some countries where honor is inherited.

For that, you are related to God’s self, He bestowed you with honor:
{And indeed We have honored the Children of Adam, and We have carried them on land and sea, and have provided them with At-Tayyibat (lawful good things), and have preferred them above many of those whom We have created with a marked preferment.} (Al-Isra’ 17: 70)

God also says:
{Say (O Mohammad) to ‘Ibadi’ (my slaves) who believed that they shoud perform Assalat ‘Iqamat As-salat’ and spend in charity out of sustenance We have given them secretly and openly before the coming of a day on which there will be neither mutual bargaining nor befriending} (Ibrahim 14: 31)

5- “Al-Haseeb” is the one whom every honor in this universe ends with Him.

{And try orphans (as regards their intelligence) until they reach the age of marriage; if then you find sound judgment in them, release their property to them, but consume it not wastefully, and hastily fearing that they should grow up, and whoever (amongst guardians) is rich, he should take no wages, but if he is poor, let him have for himself what is just and reasonable (according to his labour). And when you release their property to them, take witness in their presence; and Allah is All- Sufficient in taking account.} (An-Nisa’ 4: 6)

Related to God as “Al-Haseeb”, no matter how people gather to hurt you, and trap you into pain, saying: (hasbiyallahu wani’mal wakeel) “God is sufficient for me, and He is the best disposer of affairs (for me)”, you are much stronger than them with God:
{O Prophet (Mohammad)! Allah is Sufficient for you and for the believers who follow you.}
(Al-Anfal 8: 64)

And God said:
{Would that they were contended with what Allah and His Messenger gave them and had said: “Allah is Sufficient for us. Allah will give us of His Bounty. And so will His Messenger (from alms). We implore Allah (to enrich us).} (At-Tawbah 9: 59)

Whoever loves us is loved by us, whoever asks us will be given, whoever is satisfied with what we have, we and what we have are his, say God is sufficient for me, God suffices me. God says:
{And whosoever fears Allah and keeps his duty to Him, He will make a way for him to get out (from every difficulty), And He will provide him from (sources) he never could imagine. And whosoever puts his trust in Allah, then He will suffice him. Verily, Allah will accomplish his purpose. Indeed Allah has set a measure for all things} (At-Talaq 65: 2-3)

God ordered Prophet Muhammad (peace be upon him) to say:
{But if they turn away, say O Muhammad: Allah is sufficient for me. La ilaha illa Huwa (none has the right to be worshipped but He) in Him I put my trust and He is the Lord of the Mighty Throne.} (At-Tawbah 9: 129)