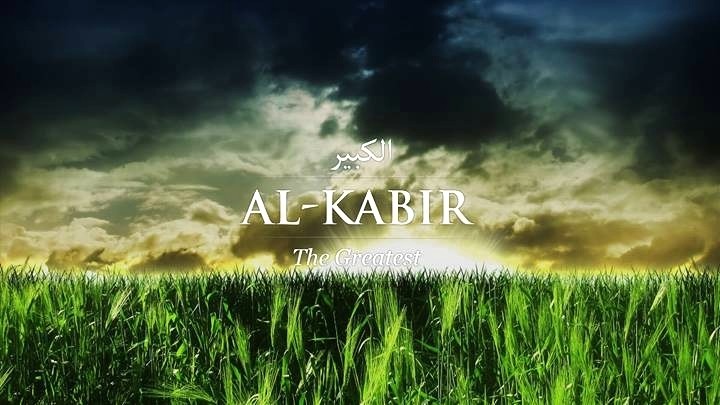 In other words, man is never happy and contented unless he knows his Lord, Allah, the All Mighty, the All-Great, the King, the Most Gracious, the Most Merciful, the Omnipotent, the Omniscient, the All-Hearing, the All-Seeing, among His other Divine Names and Attributes. Allah, Glory to Him, addresses this issue:

“And to Allah do belong (all) the Most Beautiful Names, so call Him thereby, and leave the company of those who deny His Names, (as) they will be requited for what they used to do.”
[Al-A’raf 7; 180]

God’s name Al-Kabeer comes in different forms: “Al-Kabeer” (The All-Great), “Al-Mutakabir” (The All-Proud) and “Al-Akbar” (The Greatest). And in fact, they all refer to one and the same thing. However, in Prophetic Hadith we read that so long as we say believingly, “Allahu Akbar!” (Allah is Greater!), there is nothing that we magnify or fear except Allah alone, “The All-Knower of the Unseen and the Seen, the All-Great, the All-Exalted.” [Ar-Ra’d 13; 9]

“Intercession with Him profits not except for him whom He permits. So much so that when fear is banished from their hearts, they (the angels) say: ‘What is that your Lord has said?’ They say: ‘The truth. And He is the Most High, the All-Great.’” [Saba 34; 23]

Why and How God is Kabeer (All-Great)?

1- There is a kind of harmony and consistence between man’s pure original human nature and Allah’s divine names and attributes. In other words, as a human being, you are naturally predisposed to glorify and magnify those who are great and magnificent; and the Lord, Allah, is the All-Great. You are naturally predisposed to turn to those who are generous; and Allah is the most generous.

In fact, all of those who admire people who claim to be perfect, but suddenly find out that they are by no means as such, they are greatly shocked and frustrated. However, if man admires his Lord, Allah, the All-Great, the fountain of perfection, he will never be shocked or disappointed. To this, Allah says: “And they will not receive admonition unless Allah so wills; He is the One Who deserves that mankind should fear and the One Who deserves to forgive.”
[Al-Muddaththir 74; 56]

... once you know that Allah, All Mighty, is the source of all such perfect qualities, you turn to Him with love and devotion

2- Man’s pure original human nature makes him naturally predisposed to love those who are great, generous, merciful, powerful …etc. Once he gets to know that the Lord, Allah, is the source of all beautiful names and attributes, he admires and loves Him, he feels secure and peaceful with Him, and, hence, he attains happiness in the life of this present world and the world to come. If, for one single moment, he fancies that he could be happy or peaceful away from Allah, he is absolutely wrong. This is exactly what religion calls for. Allah, the All-Great, says: “Nay! Verily, it (Allah’s Religion) is but an admonition.” [Ar-Ra’d 13; 54]

3- As Allah’s religion clarifies to man, and reminds him of his pure original human nature, therefore once you know that Allah, All Mighty, is the source of all such perfect qualities, you turn to Him with love and devotion and consequently you attain happiness in this present world and the Hereafter. To this, Allah, the All-Great, says: “See how We prefer one above another (in this world), and verily, the Hereafter will be greater in degrees and greater in preferment.”
[Yusuf 12; 21]

And if He bids us to magnify and glorify Him, He does so only to help us attain happiness with Him, to turn to Him with love and devotion, and consequently to accomplish the first and foremost goal of our creation and existence: “And magnify your Lord (Allah)!” [Al-Muddaththir 74; 3] He does so only in order to help us know Him duly and attain happiness by such knowledge.

God’s Name Al-Kabeer: What It Tells Us?

1- The Arabic word “kabeer” (great) is the opposite of “small” or “insignificant”, as we usually describe things as being great or small, greater or smaller, …etc. We say that this mountain is smaller or greater than that one, but that one is the greatest, etc. The word “small” or “insignificant” is the opposite of “big” or “great”. In the government there are ranks and authorities, some of which are higher and greater than others. Compare, for example, an ordinary teacher to a school principal, a school principal to an educational director, and an educational director to a Minister of Education.

3- Concerning this divine name, Allah is the only one Who is perfect and most noble; He is far Exalted above being confined by a certain place, space or volume.

4- God is “Al-Kabeer” (The All-Great) that He is far too great to be compared to any of His creatures. In other words He is by no means like any of His creatures; and none of His creatures can ever be like Him. In this sense, the word “Kabeer” (Great) means “nothing is like Him” and “nothing can possibly be likened to Him”. He, Glory to Him, is far greater and more exalted than whatever you might think of Him.

5- The word “Akbar” (Greater) also means that the Lord, Allah, The All-Great, is infinitely greater than whatever human beings can ever know about Him. In other words, He is far too greater in might, power, wisdom, mercy …etc, than mankind can ever imagine. This is what “Alahu Akbar” (Allah is Greater) means.

Therefore, you should always turn to Allah with faithful worship and sincere devotion, for He is far Greater than whatever you may know, think or imagine about Him: “And remembrance of Allah is greater; and Allah knows what you do.” [Al-‘Ankabut 29; 45]

6- The words “Al-‘Atheem”, “Al-Kabeer” (The All Mighty, The All-Great) are interrelated in this context. These two words show that Allah is full of pride; and His divine pride stems from His Being perfect in His own Self and existence. Also, existence of all things is conditional on His own divine will for He, alone, is the one who brings things into existence.

How It Reflects on Us?

When Allah sees that you glorify Him, Alone, but not any other fellow human being, He loves you and brings you near to Him

Hence, you shall never be great in the sight of Allah unless your knowledge, perfection, good manners and call for Allah pervade other fellow humans.

2- When Allah sees that you glorify Him, Alone, but not any other fellow human being, He loves you and brings you near to Him. But if you show inadequate humbleness or low self-esteem before other fellow humans and seek to please them at the expense of Allah’s Good Pleasure, you are by no means great in the sight of Allah.

3- If a true believer does not feel that he is at peace with Allah, but rather thinks that Allah will deal with him just as He deals with unbelievers or irreligious people, this means that he thinks badly of Allah. In other words Allah loves His believing slaves not only to trust in Him but also to feel confident and proud of Him: “And do not become weak (before your enemy) nor be sad, for you will be superior if you are indeed (true) believers.” [Al-‘Imran 3; 139]

Thus, true faith should be accompanied by high self-esteem, dignity, trust in Allah and a feeling of excellence. Therefore, if you really believe that Allah is the All-Great, you should be proud of Him, put your trust in Him, you should be confident of Him, and you should rely on Him.