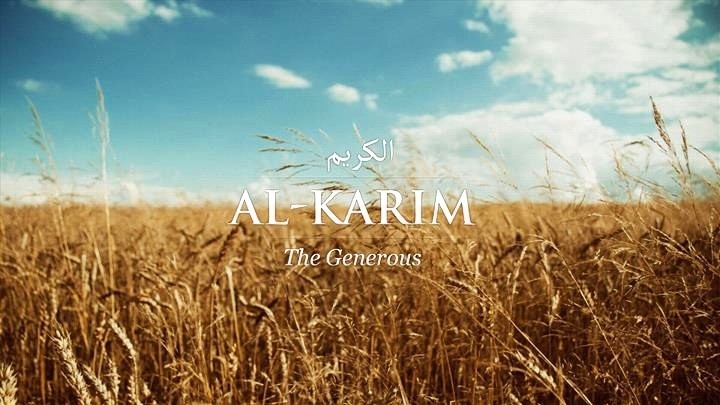 [God is “Kareem” in the sense that whenever He gives He gives most generously; and when He is disobeyed, He forgives most forbearingly.]

“Al-Kareem” is one of God’s divine names that can be attributed also to human beings; such a name embraces many great meanings: “the generous”, “the holy”, “the noble”, “the glorious” …etc.

The Name “Al-Kareem” is confirmed by God’s words:
{O man! What has made you careless about your Lord, Al-Kareem (the All Laudable), Who created you, fashioned you perfectly and gave you due proportion? In whatever shape He willed, He put you together.} (Al-Infitar 82: 5-8)

Linguists say: “Each and every laudable thing is described as being ‘Kareem’.” This adds a lot more meanings to the word “Kareem” than that commonly understood as “generous” (giving, or ready to give, freely).

Precious stones, such as diamonds, rubies, and pearls are described in Arabic as“Kareem” (precious).

Another meaning is “of noble birth”. To this effect, Prophet Muhammad (peace be upon Him) says: “Joseph is the noblest of all mankind.”

The word “Kareem” also means, “good looking”. To this effect, the Quranic verse goes:
{Then, when they (the women) saw him (Joseph), they so admired him that they cut their hands, saying, ‘May Allah save us! This is no mortal! This is but a Kareem (i.e. most beautiful) angel!} (Yusuf 12: 31)

As for the expression “Al-Maqam Al-Kareem”, the laudable station, it means paradise, where there is no fatigue, fear, worry, sadness, envy, hatred or any other troublesome thing whatsoever.

“Kareem” is ‘something that is very scarce, badly needed and cannot be done without.’
The word “Kareem” also means, “dear, most beloved, and most honorable”. God says:
{O mankind! We have created you from a male and a female, and made you into nations and tribes, that you may know one another. Verily, Akramakum (i.e. the dearest and most honorable of you) with Allah, are the most pious and dutiful. Verily, Allah is All-Knowing, All-Aware.}(Al-Hujurat 49: 13)

Also, the word “Kareem” means full of benefits and uses:
{She (the Queen of Sheba) said: ‘O chiefs! Verily, here is delivered to me Kitabon Kareem (a letter full of benefits).}(An-Naml 27: 29)

A female camel is said to be “Kareemah” if she produces a lot of milk.

Grapes are also called in Arabic “Karmah” because they are full of benefits: They provide people with shade and delicious nutritive wholesome fruits.

Also, the expression “Makarim Al-Akhlaq” means the very best, purest and most noble manners and characters.

Now, when we describe God as being “Kareem”, this means that He is all laudable, as He described Himself:

God is “Kareem” in the sense that He initiates His divine favors to His slaves, even though they do not deserve such favors.

Accurately and comprehensively, God’s divine name,“Al-Kareem” denotes that His Existence is definitive. He is free from any defect or imperfection. He is the All Mighty and no one but Him deserves to be worshiped. This can be summed up in three notions with regards to God: His existence, oneness, and perfection. In this sense God is “Kareem”; He exists, He is one, and He is perfect. These three accurate divine attributes that have to do with God’s name “Al-Kareem” can be explained as follows:

2- When we invoke God, “Ya Kareem Al-‘Afou” (O All Pardoning!), this means that God’s divine pardon does not mean only cancelling His punishment for you but also making people forget your sin and: Due to God’s infinite pardon, He, all pardoning, makes you forget the sin you have committed: “If a believer returns to God with true sincere repentance, God makes him, the angels and the whole world, forget his sins and misdeeds.” Delicately, due to God’s infinite divine grace, if a believer commits a certain sin and then, for some reason or another, forgets it, God deals with him generously and makes him live happily and comfortably.

4- God is “Al-Kareem” in the sense that He, the All Laudable, unveils His slave’s good deeds and qualities and veils his evil ones and keeps them secret.

5- One of the beautiful meanings of God’s name “Al-Kareem” is that He overlooks His slave’s sins and misdeeds although the latter is never unaware of them. To this effect, He says:
{Think you not that Allah is unaware of that which the wrong-doers do. It is only that He gives them a respite up to a Day when the eyes will stare in horror.}(Ibrahim 14: 42).
For the same purport God’s words stand:
{And Sufficient is your Lord as an All-Knower and All-Beholder of the sins of His slaves.}
(Al-Isra’ 17: 17)

Out of His infinite divine generosity, God “A-Kareem” makes us worthy of His divine love

6- God as well is “Al-Kareem” that if His slaves turn to Him with little sincere acts of devotion, He rewards them generously. In your present life, you offer to God only a limited number of good righteous deeds: you help the poor and needy, you offer some prayers and acts of devotion...etc, but in the Hereafter, God rewards you with the garden of paradise:
{And make haste to (attain) forgiveness of your Lord, and to (attain) a Garden (of Paradise), as wide as the heavens and the earth, prepared for the pious and dutiful.} (Al-Imran 3: 133)

Quite often, God grants a weak lowly person power and dignity! In this respect, God says:
{And fulfill your covenant with Me, I fulfill My Covenant with you, and fear none but Me.}
(Al-Baqarah 2: 40)

7- Out of His infinite divine generosity, God “A-Kareem” makes us worthy of His divine love:
{He (Allah) loves them and they love Him (Allah).}(Al-Ma’idah 5: 54)

{Verily, those who believe and work deeds of righteousness: the Most Gracious (Allah) shall bestow love upon them.} (Maryam 19: 96)

8- Of His infinite divine generosity God “Al-Kareem” gives us the whole world:
{It is He (Allah) Who created for you all that is in the earth. Then, He directed His Divine Power to the heavens and made them seven heavens; and He is the All-Knower of all things.}
(Al-Baqarah 2: 29)

9- God is “Al-Kareem” that He grants without a reminder, which human beings never do. When human beings do favors to one another, they usually remind them of such favors.

10- Also, God is “Al-Kareem” as He does not make you need any means to get His divine favors nor does He make the disobedient despair of repentance. To this, He says:
{Say (O Muhammad) to My slaves who have transgressed against themselves: ‘Despair not of Allah’s Mercy! Verily, Allah forgives all sins. Truly, He is the Oft-Forgiving, the Most Merciful.} (Az-Zumar 39: 53)

13- Another meaning that His infinite divine favors never end and His benefactions are innumerable. Also, His Hands are always stretched as He is most generous, and He spends as He pleases.

14- God is “Kareem” when He gets angry with those who do not ask Him or pray to Him. In this regard, Prophet Muhammad, peace be upon Him, says: “Allah, All Mighty, is “Kareem” (All Laudable); and He loves noble manners and hate lowly ones.”