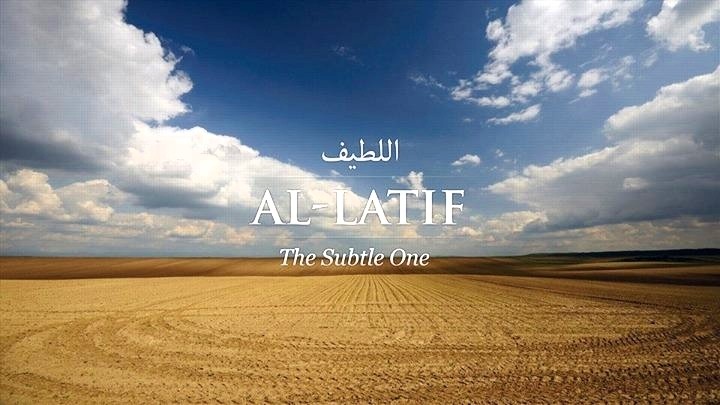 ALLAH: Al-Lateef (The All-Kind, Most Gentle)

{Allah is Ever All-Kind to His slaves. He gives provision to whom He wills; and He is the All-Strong, the All Mighty.} (Ash-Shura 42: 19)

When you drink a glass of water, you quench your thirst; but water has been created for another more sublime purpose than quenching thirst.

When you read a book about honey and wonder at the marvelous creation of those tiny insects, bees, with their wonderful social relations and well-organized societies, which are far more advanced than those of human beings, and in which each and every citizen bee knows perfectly their duties and rights and sticks to them. Tell me: which human community is so well organized as that of a beehive? No human community is as socially advanced as that of bees or ants! Yes, indeed! When you read a book about bees, you feel humble and submissive before the Creator who has perfected their creation. You may even cry in amazement at such wonderful sight as a beehive. By so doing, you achieve the major purpose of God's creation of bees, even though you might not afford to buy any of their honey; while another person might be fed up with lots and lots of honey but fails to contemplate its maker’s divine might and generosity.

Do you see things in the universe that bespeak God's being All-Kind? Yes, of course. Take, for example, the air, which surrounds us from all sides: we breathe it, and if we move it, we feel that it exists. It carries an airplane that weighs 450 tons: 150 tons of the body of the airplane itself, 150 tons of fuel, and 150 tons of passengers and their luggage. The air is a really marvelous thing!
When a spaceship enters the earth’s atmosphere, it becomes a blazing mass of flames because of its contact with the air. However, on the surface of the earth, the air cannot be seen and is noiseless. In other words, it is there as if it were not, for it does not eclipse vision and allows sound to travel through it. Hence, the air manifests God’s name “Al-Lateef” (the All-Kind). In this context, God, All-Kind, says:
{Allah is Ever All-Kind to His slaves. He gives provision to whom He wills; and He is the All-Strong, the All Mighty.} (Ash-Shura 42: 19)
Also: {Should not He, Who has created, know? And He is the All-Kind, the All-Aware.}
(Al-Mulk 67: 14)

In Arabic, the word “Lateef” has a lot of meanings, one of which is “something that is too tiny or too subtle to feel.” For example, your radio set receives radio waves that you cannot see or feel. Such waves are weightless and have no smell. Therefore, a thing that is like a radio wave is said to be “Lateef”, i.e. too subtle to be seen, smelled, or felt. In order to make things clear, let us have some more examples.

Radio waves exist but in a subtle way; and the air also exists but in a subtle way. But if the air is made to move at a speed of 800 km/h, it destroys everything on the earth’s surface. I have read about a hurricane that took place in the USA and destroyed many houses and buildings. After the hurricane, one of the people there found the engine of his big car 15 km’s away, but his house or car could not be found anywhere. Movement of the air caused such disastrous hurricane. But when calm, the air is too subtle to feel, hear, see or smell.

Therefore, linguistically speaking, the Arabic word “Lateef” means “something that is too tiny or too subtle to feel”. Another example is water. If you look at a tiny drop of water under a microscope, you see countless microscopic living creatures that are invisible to the unaided human eye. Such microscopic living creatures are “Lateefah” i.e. “too tiny to be seen or felt”.
Therefore, the air is “lateef” in the sense that radio waves are as such, i.e. they cannot be smelled, heard, felt or seen. This is another meaning.

When we say that God is “Lateef” (Subtle) with His slaves, it means that He, All Mighty, is always with you. He hears your voice, and knows what is in your mind and heart of ideas, thoughts, ambitions, conflicts, opinions, beliefs, imaginations, and conceptions. He also knows what is in your heart of troubles, pains, worries, hardships, pressures, distresses, fears, etc. Nevertheless, His being with you is not at all obvious or heavy. Imagine that someone keeps another company all the time. Whenever he sits, he sits just like him; whenever he walks, he walks just like him; whenever he enters his home, he enters with him; and whenever he eats, he eats with him. If this went on for only five or six days, it would be unbearable; and the former would address the latter, “Go away from me!”, “Get lost!”, even though the latter would not utter one single word or criticize or even object to any of the former’s deeds or ask him anything whatsoever. Such an inseparable companion is an unbearable nuisance. However, you, dear reader, know for sure that God is always with you, yet you do not feel that He is with you. In this context, God, the Subtle, the All-Kind, says:
{And He is with you wherever you may be; and Allah is the All-Seer of what you do.}
(Al-Hadeed 57: 4)

He also says: {There is no secret counsel of three but He (Allah) is their fourth, nor of five but He is their sixth, nor of fewer than that or more but He is with them wherever they may be. And afterwards, on the Day of Resurrection, He will inform them of what they did. Verily, Allah is the All-Knower of everything.} (Al-Mujadilah 58: 7)

Different Meanings of God's Name Al-Lateef
1- The first meaning of the Arabic word “Lateef” is “something that is too tiny or subtle to be seen or felt”. And since God is far Exalted above any physical incarnation or anthropomorphic elements or qualities, since nothing is the like of Him, since it is impossible to have Him confined in a certain place or time, because He is the one who created both place and time, and since God is free from all qualities and properties of His creatures, where is He? He is everywhere with all things, but not like a thing in a thing. He encompasses in knowledge all things. When we read God's words:

we should understand that God does not come in Himself; but what comes is His divine command and punishment. Hence, God “Al-Lateef” is with you all the time, but you do not see or feel Him, because He is too Subtle to be seen or felt.

As long as a true believer worships God and believes that He sees him in all places and times, he is well behaved even when he is by himself. He does not see God with his eyes, but he sees Him with his mind. True believers always watch their steps with their Lord simply because they believe that He is constantly watching them.

2- “Al-Lateef” is that He knows secrets and minute details of all things. The word “Lateef” can also be used to describe someone who is proficient and skillful in his job, and can do what others cannot do. In this sense, when we say that God is “Lateef”, it means that He is Omniscient or All-Knower of all things.

You may understand something only from outside, but fail to understand its deep secrets or the hidden intentions lurking behind it. In fact, the more knowledgeable and experienced you are, the more you understand secrets of things and intentions behind them.

Therefore, it is God, alone, who knows all secrets and realities of all things as well as their causes and effects.

3- “Al-Lateef” is that He is ever All-Kind to His slaves. He is infinitely Kind to them although they do not feel or know that. He disposes of their affairs in the most beneficial way while they are heedless. For example, in hot summer days, while people are completely unconscious, He makes fruits ripe for them. He alternates conditions and circumstances for the benefits of His slaves while they are completely heedless and unconscious. In this context, God says:
{Allah is Ever All-Kind to His slaves. He gives provision to whom He wills; and He is the All-Strong, the All Mighty.} (Ash-Shura 42: 19)

4- Imam Al-Gjazali said: "Allah, Most Gracious, is “Lateef” in the sense that He, Glory to Him, knows minute details of things and takes his slave from one condition to another most gently."
A small child has to have new teeth instead of first deciduous ones, for if it had permanent teeth from the beginning and while its mouth were still too small, its apparel would be unacceptable, and its teeth would be too big for its small mouth. If it had teeth while still suckling milk from its mother’s breasts, it would harm her thereby. Therefore, in its first year, an infant has no teeth, but then it develops primary deciduous teeth that are afterwards changed into permanent ones. But this change goes on most easily and smoothly. In other words, God, Most Gentle, causes an infant’s milk teeth to change into permanent ones most gently and painlessly. No dentist in the whole world can take out a tooth for a small infant without making it cry. Even an anesthetic injection causes a lot of pain that makes an infant cry pitifully. But God causes an infant’s milk teeth to melt away little by little while the infant feels no pain at all. Therefore, as Imam Al-Ghazali says, “Al-Lateef (the All-Kind and Subtle) is He Who knows realities and secrets of interests and grants them to those who deserve them gently, without any violence.”

5- “Accurate knowledge combined with gradual work”: this is the most accurate and most comprehensive meaning of the word “Lateef”; and the one who deserves to be described by this word is someone who knows the realities and secrets of interests and then, once he has got such knowledge, he conveys such interests to those who deserve them gently and smoothly without any violence.

God is most kind in His divine commands and creation. If you needed special sophisticated equipment to eat an apple, for example, it would be too hard to eat. But you need only a small knife, or even nothing, to eat it. If you needed a special key to open an egg, and if you had to look for the key, which you may not find, life would be unbearable. All you have to do is simply to hit it at a hard thing, like the side of a plate, peel it, and then eat it.

God's divine kindness makes a peach, an orange, or a bunch of grapes so easy for you to pick and eat. Each fruit has it own different taste, shape, composition and stature. If an apple were as hard as a rock, how would you eat it? You would need a special stone-mill in order to eat an apple or make some apple juice. But due to His infinite divine kindness, God has made an apple so easily eaten.