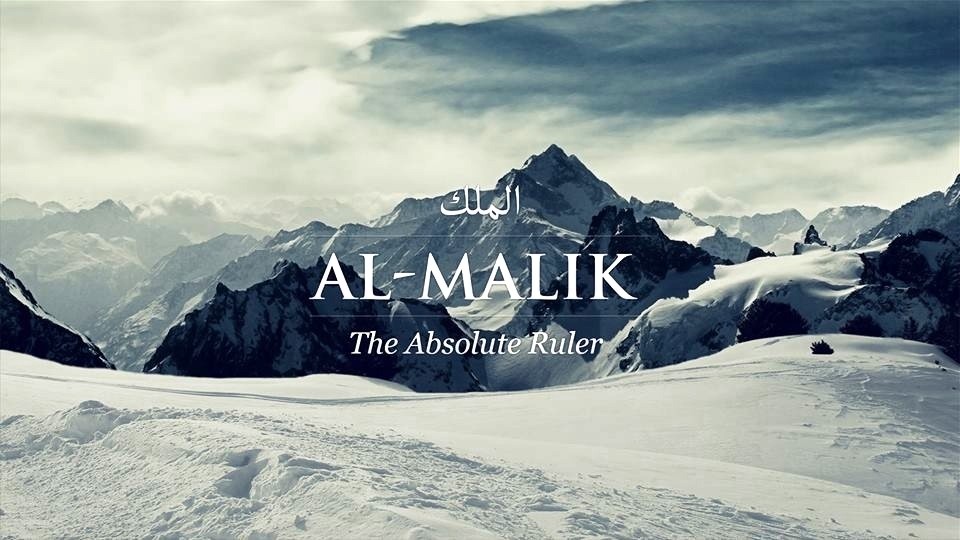 [The Real King is God, who is Self-Sufficient in Himself and Attributes and needs nothing; but all things in existence need Him for everything.]

Al-Malik (The King) is one of Allah’s ninety-nine divine Names and Attributes. According to Muslims, Whosoever knows each one of these names will be admitted into Paradise.

{He is Allah, besides Whom there is no god, the King, the Holy, the One Free from all defects, the Giver of security, the Watcher over His creatures, the All-Mighty, the Compeller, the Supreme. Glory be to Allah! High is He above all that which they associate as partners with Him.} (Al-Hashr 59: 23)

In another Quranic Verse God says:

{So Glorified and Far Exalted is He (above all that they associate with Him), in Whose Hand is the Dominion of all things, and to Whom you shall be returned.} (Ya-Sin 36:83)

Now, if we say someone is a king do we mean that he is really or metaphorically a king? Scholars refuted the idea that anyone can really own anything except God; and any kind of ownership other than that of God is only metaphoric and unreal.

This is because the real king is someone who is self-sufficient in both himself and attributes and needs no one, or nothing else in existence.

Is there a king who is self-sufficient and needs nothing for his existence and survival?
Does he not need air to breathe, water to drink, food to eat, and sleep to rest?
Does he not feel afraid or sad?
Does he not wish he could have more supporters and helpers?

Every human being is, therefore, in need of other fellow humans or other things for the achievement of his existence and survival; and, therefore, no human being, or any other creature, can ever be a real king. The Real King is God, the All-Mighty, the Self-Sufficient; and anyone else can be only metaphorically called “a king”.

The Real King is God, who is Self-Sufficient in Himself and Attributes and needs nothing; but all things in existence need Him for everything. In other words, He is the King by Himself, His Existence, and His Attributes. He is in need of nothing, but all things do need Him. Such is the accurate definition of “The King”, and none but God, deserves it.

And real ownership is to control one’s desires and not to let them dominate over him, to be free from oneself and not possessed thereby.
To this effect, Joseph, (peace be upon him) acknowledges the fact that God has bestowed on him sovereignty:

{My Lord! You have indeed bestowed on me of the sovereignty and taught me something of the interpretation of dreams. (You are) the Only Creator of the heavens and the earth! You are my Guardian (and Protector) in this world and in the Hereafter! Cause me to die as a Muslim and join me with the righteous!} (Yusuf 12: 101)

But what kind of sovereignty was it? It might be thought that it was sovereignty over treasures of the earth, but most interpreters hold that it was not that as such, but, rather, he was granted the real sovereignty, namely self-control. It was when he got control of himself saying: {I take refuge with Allah!} (Yusuf 12:23) when the king’s wife invited him maliciously to indecent work, seducing him: {Come on!} Scholars of Quranic interpretation said: This is real sovereignty that never perishes.

Some say: The King is He Who possesses the hearts of worshipers and makes them anxious. In fact, when someone gets to know God, he enters a state of love and becomes possessed thereby. He becomes great after having been trivial. Hence, he enters a state of permanent anxiety until he meets his Lord, wondering: “Is my Lord contented with me?! Does my work appeal to God? Does God love me?! Is my work sincere enough?! Is there any deviation in my work?! Is there anything or anyone I seek other than God?

If He gives, He amazes; and if He brings someone to account, He inquires about everything.
God is The King, Who, if He so desires, grants ownership and dominion, and, if He so desires, causes to perish. He is the Real King, Whom none could ever defy or dispute with. None could ever resist His Irresistible Divine Will or prevent His Judgment. He is the King, by whose command all stars and planets run.

By the Quranic Words {And you endue with honor whom You will} we embark on the notion of honor and humiliation. Here we have something delicate: If God desires to honor you, He subjugates even your enemies for you; and if He desires to humiliate someone, He makes even his closest relatives humiliate him: {And he whom Allah humiliates shall receive honor from none.}

The Quranic words {In Your Hand is the Good} mean that even humiliation coming from God to some of His slaves is good, and taking away kingdom from other slaves is also good, even if it might be considered as evil by some ignorant people.

The words {You make the night enter into the day…} denote God’s divine disposal with the universe. The earth goes round the sun in an elliptical orbit.
{Verily, Allah grasps the heavens and the earth lest they should move away from their places; and if they were to move away from their places, there is not one that could possibly grasp them after Him. Truly, He is Ever Most Forbearing, Oft-Forgiving.} (Fatir 35:41)

One of the connotations of God’s being The King is that He alternates day and night and brings the living out of the dead and the dead out of the living.

{And Noah called upon his Lord and said, ‘O my Lord! Verily, my son is of my family! And certainly, Your Promise is true; and You are the Most Just of the judges.’ He (Allah) said, ‘O Noah! Surely, he is not of your family; verily, his work is unrighteous. So ask not of Me that of which you have no knowledge! I admonish you lest you should be one of the ignorant.} (Hud 11: 45-6)

The last item of God’s being The King is: