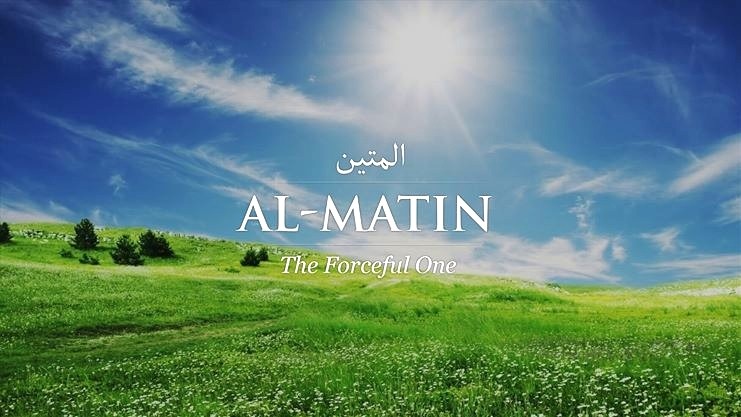 ALLAH: Al- Mateen - The Firm; The Possessor of Strength

Truly Allah, He is the Provider, the Possessor of Strength , the Sure.
( Surat adh-Dhariyat, 51:58)

The issue that most misleads unbelievers is not Allah's existence, but His attributes. Some believe that Allah initially created everything and then left them to their own devices; others argue that although Allah created us, we do not have to feel any responsibility toward Him. To conclude, apart from denying Allah's existence, they do not measure Him with His true measure. This attitude underlies their unbelief, as “They do not measure Allah with His true measure. Allah is All-Strong, Almighty” ( Surat al-Hajj, 22:74) reveals.

However, one day those who do not appreciate Allah's power, despite all of the surrounding evidence, will be unable to deny it. On that day, they will deeply feel Allah's power and strength. By His will, the strongest buildings and unshakable mountains will be crushed with a single blow:

So when the Trumpet is blown with a single blast, and the ground and the mountains are lifted and crushed with a single blow. On that Day, the Occurrence will occur and Heaven will be split apart, for that Day it will be very frail. ( Surat al-Haqqa, 69:13-16)

The resulting destruction will befit Allah's glory and power. Oceans, the greatest source of life, will become like boiling water and then burst into flame. All the beings and orders with which humanity is accustomed will be demolished. The heavens and Earth will be crushed by the Power that created them. The sun, the source of energy that emitted light for millions of years, will become dull, thereby revealing that it has a master. Through these events, Allah will reveal that He is the sole and real Master, the only being having true sovereignty and power. One verse reads:

They do not measure Allah with His true measure. The whole Earth will be a mere handful for Him on the Day of Rising, the heavens folded up in His right hand. Glory be to Him! He is exalted above the partners they ascribe! ( Surat az-Zumar, 39:67)

Through these events on the Day of Judgment, our Lord will show His power to all people. Those who insisted upon unbelief will finally comprehend His infinite power. But believers, as a reward for seeking His good pleasure throughout their lives, will meet His mercy. The Qur'an describes their joy on that Day in the following terms: