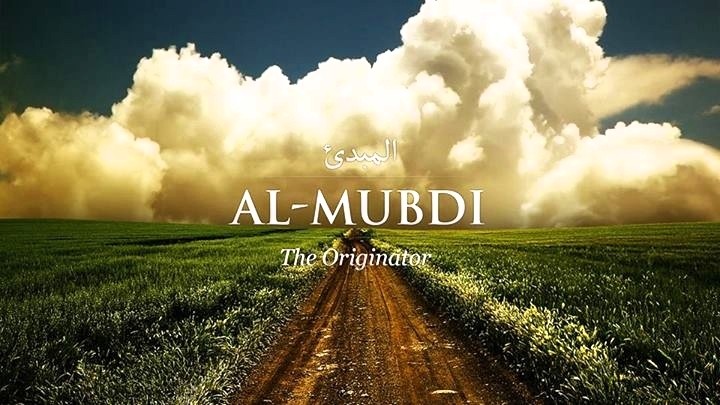 ALLAH: Al-Mubdi' - The Originator,  The Starter,  The Beginner

The One who begins all things. The One who initiates all creation.
From the root b-d-' which has the following classical Arabic connotations:

to begin, create, make something new
to make something be first, have precedence
to contrive a new thing
to invent, to do first
to commence, start, at the beginning
The term Mubdi' is not specifically used as a Beautiful Name in the Qur'ân.

The terms al-Mubdi' (the Starter) and al-Mu'îd (the Restorer) are often used together in the hadith, and are also paired together by many commentators including al-Ghazâlî who described them as:

al-Mubdi' (the Beginner) al-Mu'îd (the Restorer) - these terms mean the One who bestows existence, and when this origination is not preceded by something like it, it is called a beginning; but when it is preceded by something like it, then it is called restoration.... all things began with Him and are restored to Him; began in Him and in Him are restored.

He who createth mankind, and who returneth them after life to death...
In some Classical Arabic literature, the participles Mubdi' and Badî' are used interchangeably. However, in many Qur'ân commentaries, these terms are used to describe slightly different attributes, with the name Mubdi' emphasizing the initiation of creation, while Badî' emphasizes the awesome innovation of such creation.

Mubdi' is the One who initiates, starts or begins the production or creation of all things.

Badî' is the One who creates in awesome, wonderful, amazingly original ways that have no precedent whatsoever.

Mu'îd is the One who repeats, restores and revives that which had been previously invented.

Khâliq is the One who continues to plan, measure out and create and who has the power to change things from one state to another, in and out of existence.

Musawwir is the One who arranges forms and colors, and who is the shaper of beauty.