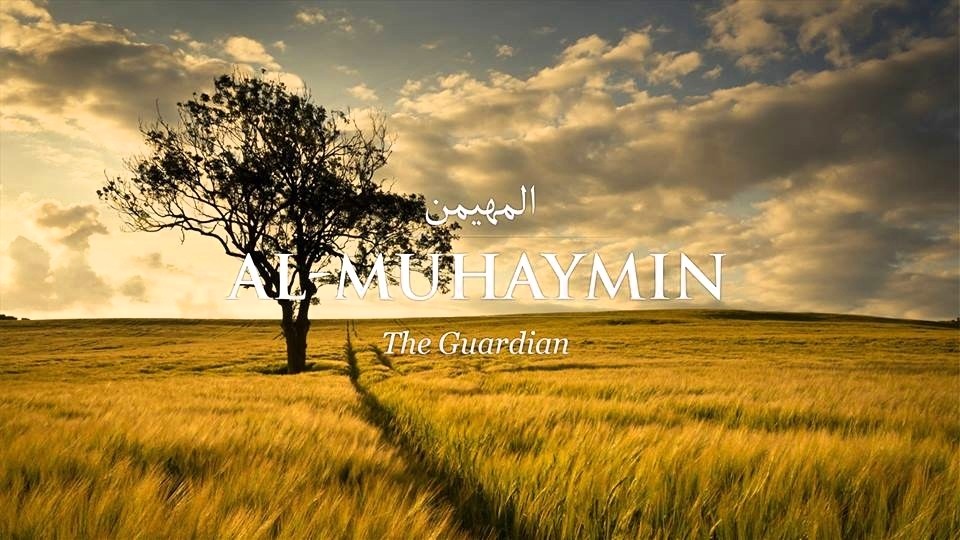 Through His knowledge, control and protection Allah is the guardian over all, the one who oversees, grants peace, security and sustenance.
Amongst different meanings of God’s name “Al-Muhaimin” being the observer and the witness who knows all secrets and what is even more secret than secrets. He knows deception of the eyes and what the heart conceals. He knows overt and covert things and man’s secret and public affairs. He sees things and what lies behind them as He sees all things, both hidden and seen.

The name also necessitates continuity and endurance, hence some people may be powerful and able to do things, but they lack knowledge, they do not know what is going on. Others may know and have the power to do things; nevertheless, they cannot guarantee the future.

A person may know what is going on before and around him, and he may be sure that his hand can reach things under his power, yet he does not know what the results will be in the future.

But when we say God is “Al-Muhaimin” it means He knows all things, and that His divine Knowledge is infinite, nothing in the heavens and the earth can ever be hidden from Him. This is because God knows even secret glances of the eyes. He knows what was, what is, what will be and what is not: if it were to be how it would be.

Describing His infinite divine power and ability, God says: {Allah causes the night and the day to succeed each other. Truly, in this is indeed a lesson for those who have insight.} (An-Nur 24: 44) His infinite divine Knowledge is described in His words: {If a wound has touched you, be sure that a similar wound has touched the others. And so are the days: We give them to men by turns so that Allah may test those who believe and that He may take martyrs from among you. And Allah likes not the wrong-doers.} (Al-Imran 3: 140)

Moreover, He possesses the future as nothing could ever escape His infinite divine knowledge and power, and there is no one in all existence that shares in His decision and rule: {They have no Guardian other than Him, and He makes none to share in His Decision and Rule.} (Al-Kahf 18: 26)

“Al-Muhaimin” is, therefore, the one who has absolute knowledge of all things; whose power is infinite, irresistible and absolute.

Therefore, God’s domination over His creatures is mixed with His divine love, compassion, tenderness, mercy and care concerning their happiness in the present world and the world to come. In this context, Prophet Muhammad (peace be upon Him) one day saw a woman kissing her beloved baby. He said: “Could that woman possibly cast her (beloved) baby in fire?!” “By no means, O Messenger of Allah!” They replied. He said, “By Allah, in Whose Hand is Muhammad’s soul! Allah is indeed more Merciful upon His slave than this mother upon her (beloved) baby!”

3- When we say that someone is “Muhaimin” over a certain store, for example, it means that he is trustworthy and honest in being in charge of such store. He never lets anything go out of the store without his knowledge, registration, observation, or control. Such is domination of trustworthiness.

Thus, God is “Al-Muhaimin” that He is the trustworthy protector of His slaves. To this effect the Quranic verse goes: {He (Joseph’s father, Jacob) said: ‘Can I entrust him (Joseph’s brother) to you except as I entrusted his brother (Joseph) to you aforetime? But Allah is the Best to protect, and He is the Most Merciful of those who show mercy.} (Yusuf 12: 64)

4- The word “Muhaimin” means that if you are with God, believing in His existence, and if you desire to argue with someone on such basis, you will be the winner, because all events will come to prove the validity of your argument. This is because everybody puts forward a certain theory, hypothesis, analysis, doctrine, notion, interpretation, creed, etc, but actual realities prove validity of the ideology that is put forward by God in the Quran. Therefore, if you are on the Quran’s side, you will be the winner every time.

5- Also God is “Al-Muhaimin” in the sense that He verifies His words to you by His divine acts concerning all the things that you read in the Quran and believe therein.

6- Another meaning of such divine name is that God makes you victorious; He makes your words truthful and your belief rightly guided. Things come to verify your belief and words.

Other subsidiary meanings of the name include His overwhelming divine love, care, protection and compassion, but not arrogance, tyranny or unjust domination, as is the case with human beings. It also includes verification of all the things mentioned in the Quran.