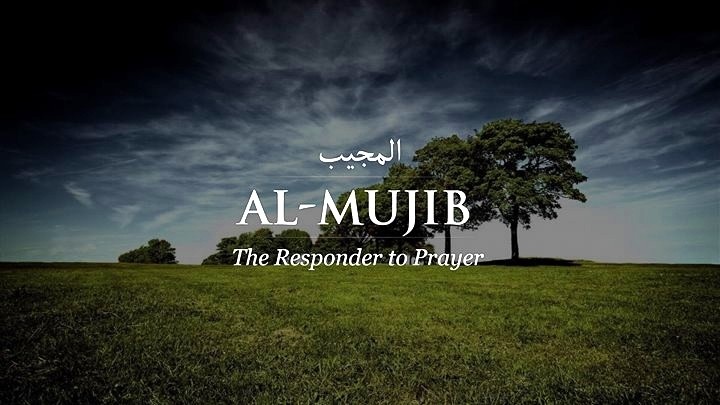 ALLAH: Al-Mujeeb (The Answerer of Prayers)

This name of Allah is found in the following verse of the Qur’an:

{He it is Who enables you travel by land and sea; yet when you are in the ships, and they sail on with them in a pleasant breeze, and those (on the ship) rejoice, a violent wind overtakes them and the billows surge in on them from all sides, and they become certain that they are encompassed about, they pray to Allah, being sincere to Him in obedience, saying: “If You deliver us from this, we will most certainly be of the grateful ones.”

But when He delivers them, behold! they transgress insolently throughout the Earth in defiance of right!} (Yunus 10: 22-23)

Allah answered Prophet Noah, peace be upon him, in his distress, saving him and his followers in the ark when He drowned the sinful people in the flood: {Noah did certainly call to Us, and We are the best to answer prayers.} (As-Saffat 37: 75)

Allah answered the prayers of Job, peace be upon him: {(Remember) Job, when He cried to his Lord, ‘Truly distress has seized me, but You are the Most Merciful of those who are merciful.’ Then We heard his prayer and removed the distress that was on him, and We restored his people to him, and doubled their number, a mercy from Us and a reminder to the worshippers.} (Al-Anbiya’ 21: 83-84)

Allah answered the prayers of Jonah, peace be upon him, when he cried out from the belly of the whale: {And (remember) Jonah, when he went off in anger and deemed that We would not straiten him. But he cried through the depths of darkness, saying: ‘There is no god but You, Glory to You: I was indeed wrong!’ So We answered him and delivered him from grief, and thus do We deliver the believers.} (Al-Anbiya’ 21: 87-88)

They beseeched their Lord with utmost humility and sincerity, so He, in His infinite grace, safeguarded them.

Likewise, Allah answered the prayers of Abraham, Zechariah, John the Baptist, Jesus, and indeed every one of His prophets and messengers, peace be upon them all. They beseeched their Lord with utmost humility and sincerity, so He, in His infinite grace, safeguarded them, guided them, honored them, and accepted their appeals.

Allah is the one who answers the prayers of those who beseech Him and place their hopes in Him. Allah alone is the one to whom all prayers and supplications are to be made.

{And your Lord says: “Call on Me; I will answer your (prayer): but those who are too arrogant to serve Me will surely find themselves in Hell - in humiliation!”} (Ghafir 40: 60)

In other words, when a person is blessed to beseech the Lord, this itself is the benefit. As for the answer, that is something which has already been granted.

Allah is the one who removes our distresses. He reminds us: {It is Allah who delivers you from these and from every distress, but again you set up others (with Him).} (Al-An‘am 6: 64)

Our supplications to Allah are a means to dispel calamities and hardships, and to draw blessings and opportunities to us. However, supplications are not the only cause for these desired effects. There are other causes that need to be acknowledged as well, including natural cause-and-effect relationships.

He has made our supplications one of the influences that affects our lives, and He has promised to answer our prayers'

Allah, in His wisdom, knows what is best. He has made our supplications one of the influences that affects our lives, and He has promised to answer our prayers. This means that sometimes He answers us with precisely what we ask for. At other times, He might prevent a calamity from befalling us that we would otherwise have been destined to suffer from.

Also, He might postpone granting us the answer to that prayer until the Day of Resurrection, and reward us with the blessings of it on that day in terms of our judgment and reward in the Hereafter, through having it weigh in our favor on that day when our deeds are weighed. This is guaranteed for all who beseech Allah with sincerity and devotion. As for the answer to our prayers coming in this world with precisely what we ask for, this is usually the case.

When we read about the lives of the prophets, we witness many cases where Allah answered their prayers. Prophet Muhammad, peace be upon him, beseeched Allah on behalf of a number of his companions. He beseeched Allah about Ibn 'Abbas asking: “O Allah! Make him deeply knowledgeable about the religion.”

We find many accounts, past and present, of how Allah answered people’s prayers. Wherever people believe in Allah, even if they might be sinful in their deeds and misguided in their religious understanding, we find them speaking about how Allah answered their prayers and removed their woes.

This is something that cannot be denied, a further proof attesting to Allah’s existence and His mercy. This is the reason why we scarcely find anyone, when faced with a great calamity or woe, who refrains from turning to Allah to relieve his or her distress.

The Benefit of Knowing Allah, Al-Mujeeb

Awareness that Allah is the Answerer of Prayers is a comfort and source of strength for those who are cut off from all other hope or recourse, with only Allah to turn to. At this time, they turn to Allah with the sincerest and most devoted heart, so Allah quickly relieves their burdens and removes their afflictions.

“By My Might and Majesty, I will grant you victory, though it be after a time.” (Sunan At-Tirmidhi, Sunan Ibn Majah)