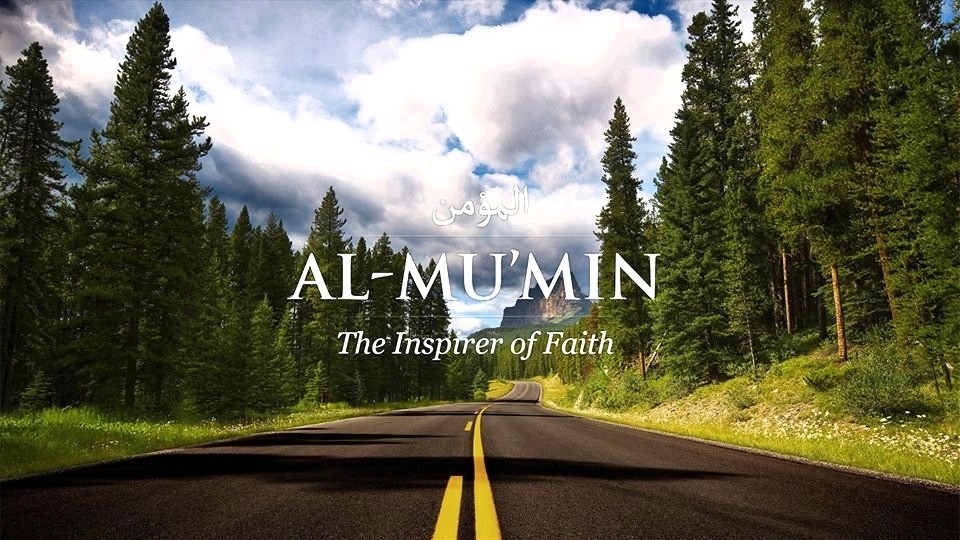 AL-MU'MIN - The Trustworthy, He Who Gives Tranquillity

He is Allah—there is no deity but Him. He is the King, the Most Pure, the Perfect Peace, the Trustworthy , the Safeguarder, the Almighty, the Compeller, the Supremely Great. Glory be to Allah above all that they associate with Him. ( Surat al-Hashr, 59:23)

Allah presents a pleasing life to believers both in this world and the next. This life, which is perfect in all respects, makes them spiritually strong. Indeed, Allah gives spiritual peace and security to sincere believers. When they face any difficulty, He supports them, confirms His signs on their hearts, and, through the trust they put in Him, allows them to lead a peaceful life. The Qur'an informs us about this spiritual support after the Companions suffered a defeat during the time of our Prophet (saas):

Allah has helped you on many occasions, including the Day of Hunayn, when your great numbers delighted you but did not help you in any way, and the land seemed narrow to you for all its great breadth, and you turned your backs. Then Allah sent down His serenity on His Messenger and on the believers, and sent down troops you could not see, and punished those who were unbelievers. That is how the unbelievers are repaid. Then after that, Allah will turn to anyone He wills. Allah is Ever-Forgiving, Most Merciful. (Surat at-Tawba, 9:25-27)

There have always been people who, insisting upon denying Allah, work to turn sincere believers away from the straight path and to their own man-made religion. When believers reject this call, unbelievers threaten and oppress them. But during such times, Allah provides all forms of support and undermines the unbelievers' efforts, as the Qur'an reveals:

Those who are disbelievers filled their hearts with fanatical rage—the fanatical rage of the Time of Ignorance—and Allah sent down serenity to His Messenger and to the believers, and bound them to the expression of heedfulness, to which they had most right and were most entitled. Allah has knowledge of all things. (Surat al-Fath, 48:26)

Many other verses inform us about this spiritual support, especially that given to the Messengers. When unbelievers forced our Prophet (saas) to emigrate, Allah promised to support him, hindered the unbelievers' attacks, and sent down serenity upon his heart. This support is related in the following verses:

If you do not help him, Allah did help him when the unbelievers drove him out and there were two of them in the cave. He said to his companion: “Do not be despondent, Allah is with us.” Then Allah sent down His serenity upon him and reinforced him with troops you could not see. He made the word of the unbelievers the lowest of the low. It is the word of Allah that is uppermost. Allah is Almighty, All-Wise. (Surat at-Tawba, 9:40)

While Allah gives His sincere servants feelings of security and serenity, the peace and security of the Hereafter are far beyond our comprehension. For one thing, they will last for all eternity, if Allah so wills. Allah describes this unique state of material and spiritual contentment, as follows:

Those who guard against evil will be amid gardens and springs: “Enter them in peace, in complete security!” We will strip away any rancor in their hearts—brothers [and sisters], resting on couches face-to-face. They will not be affected by any tiredness there and will never be made to leave. (Surat al-Hijr, 15:45-48)