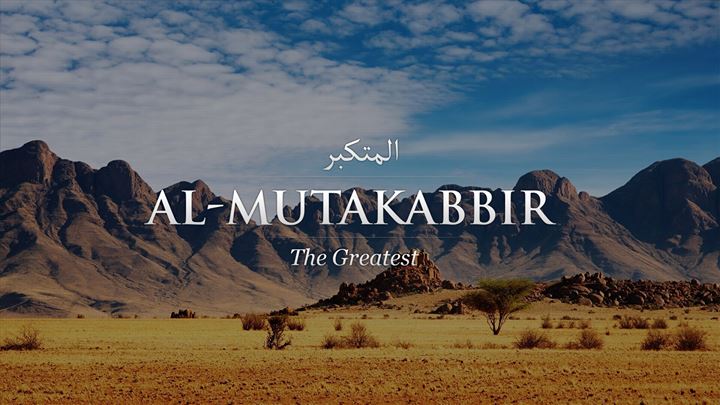 As far as God’s sovereignty, loftiness and majesty are addressed Allah is "Al-Mutakabbir".
In order to let us know that there is no god but Him, alone, that nothing is the like of Him, that He has no partners, and that He allows none to take part with Him in His divine decision, God desires to introduce Himself to us by setting the following example:

“He (Allah) sets forth for you a parable from your own selves: do you have partners among those whom your right hands possess (i.e. your slaves) to share as equals in the wealth that We have bestowed on you whom you fear as you fear each other? Thus do We explain the Signs in detail to a people who have sense.” [Ar-Rum 30; 28]

The word “Al-Mutakabbir” (the Sublime, the Supreme), is also used to describe a human being, it has an evil negative connotation, simply because such an attribute belongs to God alone. Al-Mutakabbir is someone who sees that all others are little compared to him; and he sees neither might nor glory but in himself. Put differently, he looks upon others just like kings do towards their slaves.

The Arabic noun At-Takabur (being sublime and supreme) therefore reflects divine perfection but human imperfection. It is because Allah is the creator of all worlds, in His Hand is the dominion of all things. If He desires a thing, His command is: “Be!” and it is. To Him all matters are returned for judgment and decision. His divine glory and might are Infinite. Both His divine perfection and knowledge are infinite. His divine power is also infinite: {Allah is He, than Whom there is no other god;- the Sovereign, the Holy One, the Source of Peace (and Perfection), the Guardian of Faith, the Preserver of Safety, the Exalted in Might, the Irresistible, the Supreme: Glory to Allah! (High is He) above the partners they attribute to Him.}(Al-Hashr 59; 23)

When we say: Allah is Al-Mutakabbir (the Sublime, the Supreme) in actual fact it denotes divine perfection. But when we say that a certain human being is mutakabbir, it denotes serious imperfection because it means that he/she is an insolent arrogant person. Prophet Muhammad, peace be upon Him, says: “Allah, All-Mighty, says: ‘Sublimity is My cloak, and so is Might: if anyone rivals with Me for either of them, I shall cast him into the Fire.” [Sunan Abi Dawood]

Different Meanings of Allah Being Al-Mutakabbir

1- Some scholars hold that: “The word “Al-Mutakabbir” is derived from ‘Al-Kibria’ (Sublimity, Pride); and he who has the right to claim for sublimity or pride is the king.” To this effect He says: {They said (to Moses): ‘You have come to us to turn us away from that (Faith) which we found our fathers following, and that you two may have sublimity in the land? We are not going to believe you two!} [(Yunus 10; 78]

2- Allah is also Mutakabbir in the sense that His divine sublimity is Infinite, He is great, the one whose divine greatness is Infinite. Thus ‘Al-Mutakabbir’ (the Sublime) is God, the king, Whose sovereignty never perishes, the Great, in Whose Kingdom nothing happens except by His leave, the One, the Omnipotent.

3- Another meaning is derived from the Arabic word ‘Al-Kabeer’ (the Great). Allah says: “So when she heard of their accusation, she sent for them and prepared a banquet for them; she gave each one of them a knife (to cut the foodstuff with); and she said (to Joseph): ‘Come out before them.’ Then, when they saw him (Joseph), they exalted him (because of his great beauty) and (in great astonishment) cut their hands. They said: ‘How Perfect is Allah, (Who created Joseph)! This is not a human being! This is none other than a noble angel!” [Yusuf 12; 31] And ‘exalted him’ here means the deemed him great, as due to Joseph’s great beauty, the women cut their fingers.

‘Al-Mutakabbir’ (the Sublime) is God, the king, Whose sovereignty never perishes, the Great, in Whose Kingdom nothing happens except by His leave, the One, the Omnipotent.

4- Al-Mutakabbir is Allah Who is far exalted above being unjust or unfair to His slaves.

5- Allah, Most Gracious, is Al-Mutakabbir in the sense that in His Hand is Beneficence and from Him is forgiveness.

6- Al-Mutakabbir indicates that His sovereignty, dominion and greatness are imperishable.

7- Another meaning of God’s name Al-Mutakabbir is: the great and sublime in the way that sublimity comes from self-existence and self-guidance. Allah has a free will, and Al-Mutakabbir is, who is far above any kind of imperfection or defect that does not befit His divine perfection, and who is far exalted above anthropomorphic qualities. To this effect, Prophet Muhammad says: “Verily, Allah revealed to me that you should be modest so that no one boasts before another and so that no one transgresses against another…” (Sahih Muslim)

Therefore, we have to know Allah, since if we know Him, we obey Him. To this effect, Allah says: {And likewise of men and moving living creatures, beasts and cattle, are of various colors (species). It is only those who have knowledge from among His (Allah’s) slaves that fear Allah. Verily, Allah is All-Mighty, Oft-Forgiving.} (Fatir 35; 28)

What Does the Universe Say of Allah’s Greatness?

As He cannot possibly be seen by the human eye, the universe, as His Creation, is quite visible and clearly substantiates God’s infinite divine might, majesty and power. To this effect, God says: {We shall show them Our Signs in the universe and in their own selves until it becomes manifest to them that this (the Quran) is the truth. Is it not sufficient in regard to your Lord that He witnesses all things.} (Fussilat 41; 53)

Allah’s sovereignty, supremacy and perfection cannot be known except by means of His divine cosmic signs which are wide-spread in the universe, and which betoken His infinite divine might and power: {Verily, in the creation of the heavens and the earth, and in the alternation of the night and day, there are indeed Signs for men of understanding: those who (constantly) remember Allah (while they are) standing, sitting and lying on their sides, and contemplate the creation of the heavens and the earth, (saying): ‘Our Lord! You have not created (all) this in vain! Glory to You! Give us salvation from the Fire-Torment.} (Al-Imran 3; 190-191)

Do you believe that in the human brain there is a most accurate organ that measures the difference of the sound received by both ears?! This is because the same sound reaches the ear that is nearer to the sound-source 1/1000 of a second before the other. The brain measures such difference and determines the direction of the sound-source. Without such organ, the direction of sound-sources cannot possibly be perceived. Yes, indeed! Allah is Al-Mutakabbir, the Sublime, the Supreme!

All of us have stores of liquid fuel for our heating systems; and it is known that five cubic meters of oil make five barrels. Do you believe that the human heart pumps eight cubic meters of blood in one single day, the size of the highest sky-scraper in the world in the average life-span of a human being.

Do you believe that the human liver performs more than 5,000 (five thousand) jobs in the human body and that without a liver man can survive only for three hours. The speech about Allah’s Divine Miracles in both man and the universe is endless.

Thus, our own body is a teaching aid; the organs of your body, different and numerous as they are, are the greatest teaching aid that leads you to God. To that, He calls our attention: {And also in your own selves (are Signs): will you not then see?!} (Adh-Dhariyat; 21)