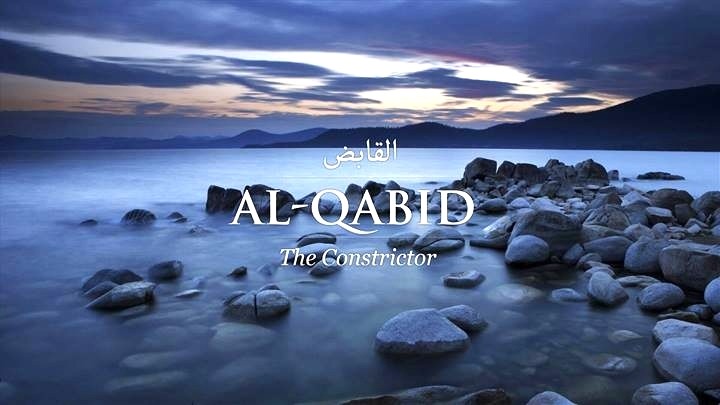 [God straitens and widens people’s hearts in the sense that He fills them with both fear and hope.]

“Al-Qabid” (the Withholder) and “Al-Bassit” (the Extender) are two inseparable Attributes of God.

The two names are inseparable in the sense that it is not permissible to mention either one without the other. This is because if you say God is “Al-Qabid” (the Withholder), it would mean that you describe Him as being niggardly or miserly; and God is far above such evil qualities.
However, God is “Qabid, Bassit”(Withholder, Extender), as being powerful and wise in the way that He withholds in order to extend, does harm in order to do good, decreases in order to increase, or abases in order to exalt in honor.

To that, God says in the Quran: {And it is Allah that withholds or extends (your provisions for you), and unto Him you shall return.} (Al-Baqarah 2: 245)

Linguistically, the Arabic word “Qabd” denotes decrease while “Bast” denotes increase; and these two actions embrace all things in existence, i.e. if God decreases something, this means that He withholds it; and if He increases something, this means that He extends it.
Concerning the fields of withholding or extension there are many meanings to God’s divine names “Al-Qabid” and “Al-Bassit”.

1- The first meaning has to do with people’s provision or sustenance. In this context, God says: {Allah extends provision for whom He wills of His slaves, and straitens it for whom (He wills). Verily, Allah is the All-Knower of all things.} (Al-’Ankabut 29: 62)

It is He who gives or withholds sustenance for people. It is He who makes people rich or poor. If He desires to provide you with sustenance, He inspires you and enables you to have the necessary ways and means to earn money and make your living. If, for some reason or another, He desires to withhold provision from you, He blocks all ways in your face, even though you might be so smart or brilliant.

For that we should firmly believe that God is the All-Provider, and that He, only He, is the one who withholds or extends provision for His human slaves.

To this effect, God says: {And if Allah were to enlarge provision for His slaves, they would surely rebel in the earth, but He sends down by measure as He wills. Verily, He is, in respect of His slaves, the Well-Aware, the All-Seer (of things that benefit them).} (Ash-Shura 42 :27)

It is God Who withholds, i.e. conceals, daylight and then brings it back.

2- The second meaning of this divine name has to do with clouds. To that, God says: {It is Allah Who sends the winds so that they raise clouds and spread them along the sky as He wills, and then break them into fragments until you see rain drops come forth from their midst! Then when He has made them fall down on whom He wills of His slaves, lo, they rejoice!} (Ar-Rum 30: 48)

Clouds are spread along the sky as God desires. He might withhold them from some people and provide them to others. At the same time, in some places the rain would be much heavier than in others. This means that God withholds rain from some and provides it to some.

3- The third meaning is concerned with light and darkness. In this context God says: {Then We withdraw it (daylight) to Us a gradual concealed withdrawal.} (Al-Furqan 25: 46)
After the night, when we might feel lonely, worried, or afraid in the dark, suddenly, the sun is made to rise, and we feel comfortable and peaceful. Hence, it is God Who withholds, i.e. conceals, daylight and then brings it back.

4- God is “Al-Qabid”, “Al-Bassit” in the sense that He withholds, i.e. seizes, people’s souls and causes them to die, or releases them, i.e. brings them back into life. Hence, provision, clouds, light, dark, and souls are all under God’s divine control; and He either withholds or extends them.

5- A further meaning has to do with the earth, as God withholds it, that is to say, He grasps it by His divine power. To this effect He says: {They made no just esteem of Allah such as due to Him. And on the Day of Resurrection, the whole of the earth will be in His Grasp, and the heavens will be rolled up in His Right Hand. Glorified is He and far Exalted is He above all that they associate as partners with Him!} (Az-Zumar39: 67)
God also extends the earth in the sense that He stretches it and makes it suitable for human life. He also withholds the earth that He terminates it or causes it to perish, as He has made it an abode for a certain limited appointed term.

6- “Al-Qabid” and “Al-Bassit” means that God takes, i.e. accepts alms and charities. In this context, Prophet Muhammad (peace be upon him) says: “If a slave (of Allah) gives a good charity, Allah accepts it from him, and He takes it in His Right Hand and breeds it as the one of you breeds his colt or young camel. And if a slave (of Allah) gives a mouthful, it grows in Allah’s Hand until it becomes as big as a mountain. Therefore, you should give alms.” (Ahmad)

7- A very delicate meaning related to “Al-Qabid” and “Al-Bassit” is that God straitens and widens people’s hearts in the sense that He fills them with both fear and hope. We are always either fearful of God or hopeful of Him. A true believer should always be in either of two states: dispirited with fear or spirited with hope.

If God withholds spiritual enhancement from us, we feel lonely, dispirited, unhappy, deprived, miserable, and even outcast or rejected. This is because God withholds spiritual enhancement from us. We read the Quran, but do not feel dully responsive towards it, perform prayer, but do not enjoy any feeling of veneration or submissiveness, desire to sit down to contemplate God and His divine Attributes, but feel distracted from so doing. Such a state is simply called “Qabd”, i.e. withholding or straitening, which makes us feel dispirited or miserable.
God’s withholding of good feelings and conditions from His believing slave is meant to make him feel afraid and worried and in order to motivate him to turn to Him in sincere repentance mixed with good hope.

8- Another delicate meaning of God’s divine name, “Al-Qabid”, namely that He is the one who controls everything.

9- The “All-Powerful” is another meaning. Sometimes, you cannot implant sadness in the heart of a happy person. If you speak to him, he does not listen to you. But God is powerful over all things, and He withholds or extends, as He pleases. He may withhold good thinking from you and cause you to be unable to understand a thing.

Hearts are of two kinds: one that is full of happiness, contentment, and divine enlightenment, and another that is hard, desolated, petrified, dead, senseless, and merciless. If God withholds happiness from someone’s heart, he is by no means happy, and if He withholds provision from someone, he will never be provided. This is because He is the All-Provider.
None of God’s creatures could ever escape from His divine judgment and ordainment, and He is most wise in His divine work and decree. That is why God says: {And I respite them: certainly, My Plan is Strong.} (Al-A’raf 7: 183)

In this Quranic verse God’s divine name “Al-Qabid” is manifested as He describes His divine plan as being strong, like a tough unbreakable cable whereby a disbeliever is tied.

10- “Al-Qabid” also means that He can block your mind for you, make your heart desolated and your soul melancholic and pessimistic. There are extreme cases of depression that drive people to commit suicide. However, a true believer is safe from such bad psychological disorder.

11- Another opinion proposed by Al-Qushairi, An Iranian Muslim philosopher, says that:” ‘Al-Qabd’ and ‘Al-Bast’ are two conditions whereby God educates those who are conscious of Him.” In this context, Prophet Muhammad (peace be upon him) says: “My Lord has educated me, and He has educated me (perfectly) well.”

God is “Al-Qabid” (The Withholder) who, some scholars say, reveals things to you in order to protect you.

Religious scholars say that “Al-Qabd” and “Al-Bast”, are two conditions whereby God refines His slaves who are conscious of Him, and whereby He opens to them gates of knowledge and wisdom. If “Al-Qabd” befalls them, it comes from the gates of Divine Majesty and wisdom of God. God’s Divine Self is withheld from the slave, who feels his Lord’s Majesty. If this condition gets harder for the slave, God treats him with kindness, and, at a certain extent, which he can bear; his heart is relieved by “Al-Bast”. If he is befallen by a state of “Al-Qabd” and, hence, he feels afraid, God does not crush him, but rather gives him an amount of “Qabd” that he bears, and then causes a state of“Bast” to befall him.

12- God is “Al-Qabid” (the Withholder) who, some scholars say, reveals things to you in order to protect you, and “Al-Bassit” (the Extender) is He, (Allah), who manifests His divine beauty and Majesty to you in order to preserve you. Thus, you are either protected or preserved by Him. Also, He is “Al-Qabid” and “Al-Bassit” in the sense that He receives charities from philanthropists and increases them, or extends His divine favors in abundance to His slaves and enables them to enjoy such favors.

As a true believer, one should always keep balance between confidence in God’s divine mercy and despair of His Paradise. This is because despair is an illness and so is extra-ambitious desire.

Yearning for God’s divine mercy, pardon, forgiveness, generosity, and forbearing, we, besides, should not forget about His divine punishment, torment, and chastisement.