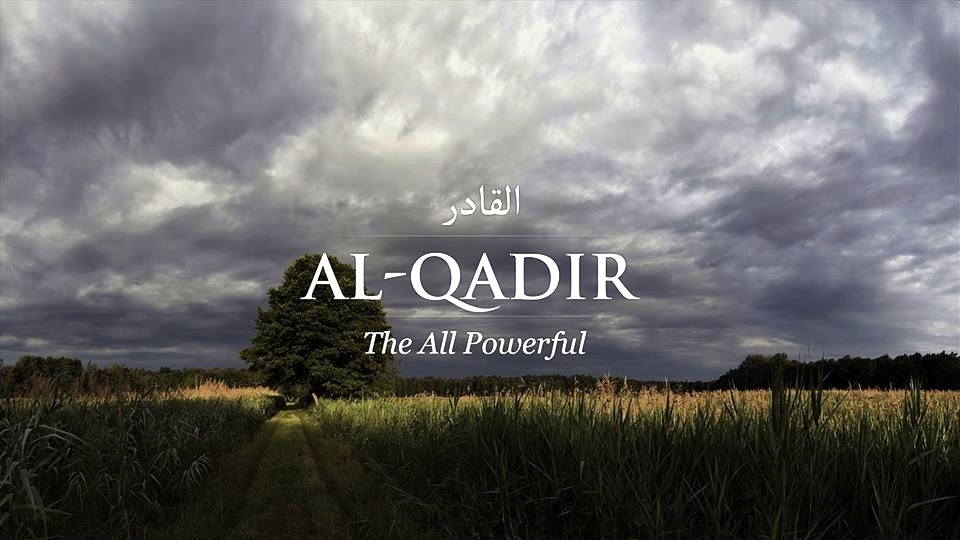 
[God, the most omnipotent, fulfills the believer’s heart with tranquility, integrity, and trust in His victory.]

Allah’s Names are beautiful, and His attributes are graceful.

By nature, mankind was created in loving the competent, without realizing they pursue to a competent person for refuge and protection. Thus, mankind has a tendency headed to the capable person; a weak person desires the protection of a strong person.

People will have tranquility knowing He is the mightiest God because of His knowledge and power. And a person will seek help only if they are sure that a strong power will hear them.

Why God is “Qadeer” (All-Poweful)?

1- In Arabic, Al-Qadeer comes from estimation, evaluation, ability, or capacity. Sometimes a person has a lot of knowledge; it makes him very accurate in his evaluation. Allah is Al-Qadeer, the almighty God, Who has an accurate knowledge of what goes on in this life, and is able to do anything.

Whereas knowledge is an essential requisite of Allah's power, most of the verses of the Qur’an in which the attribute of (the Able) are mentioned, combine the attribute (The All-Knowing) because knowledge is an essential requisite to the ability and power. Ability may be random, but if it is accompanied with knowledge, it becomes an aware ability: "He creates what He wills, and it is He who is the All-Knowing, the All-Powerful “able to do anything” [Ar-Rum 30; 54]

God knows what goes on in this world; listens if you speak, sees when you move and knows when even if you kept it in your heart.

2- Himself impotent, powerless and incompetent, man was originally created loving the competent: "Allah wishes to lighten (the burden) for you and man was created weak” [An-Nisa’ 4; 28]

"Verily, man was created very impatient; Irritable when evil touches him; and niggardly when good touches him" [Al-Ma’arij; 70:19-21]

Likewise, a knowledgeable person who is willing to listen, and hear is likeable by others: "Whatever of mercy, Allah may grant to mankind, none can withhold it; and whatever He may withhold, none can grant it thereafter. And He is the All-Mighty, the All-Wise" [Fatir 35; 2]

3- The power of God is absolute; it's been related to every possible thing. Thus, if a human being was diagnosed to have a fatal disease, still, he has his belief that Allah is able to do all things. If he was alone facing many enemies, he believes that God is able to do all things: "the companions of Musa (Moses) said: "We are sure to be overtaken." Musa (Moses) said: "Nay, verily with me is my Lord. He will guide me." [Ash-Shuara'; 26:61-62]

He knows what goes on in this world: "but a leaf falls, but He knows it" [Al-An’am 6; 59] He cares about what goes on in this planet; listens if you speak, sees when you move and knows even what you kept in your heart: "Allah knows the fraud of the eyes and all that the hearts conceal" [Ghafir 40; 19]

4- Allah knows what the disbelievers can do: "And let not those who disbelieve think that they can outstrip (escape from the punishment). Verily, they will never be able to save themselves (from Allah’s punishment)" [Al-Anfal 8; 59] He, therefore, with infinite will and power, is able to punish the disbelieving and demolish his enemies: "Allah is capable to do anything" [Fatir 35;1]

5- God, the most omnipotent, fulfills the believer’s heart with tranquility, integrity, and trust in His victory.

Thus, there is a reason for what goes on in this world that actually benefits the Muslims and that there is a hidden blessing below the surface: “Allah had completed and perfected His Grace upon you, (both) apparent and hidden" [Luqman 31; 20]

6- Allah has a decree that is from knowledge and power. It controls any person’s daily life in his/ her daily routine. Thus, running to Him gives tranquility, and peace: "Verily, in the remembrance of Allah do hearts find rest" [Ar-Ra’d, 13; 28]

It means hearts will rest with remembering Allah and that comes from being with Him. He gives health, money, intelligence, beauty, and power to people; however, He gives peace of mind only to His believers.

How to Know God Being “Qadeer”?

When someone believes everything is under God’s hands, it does not give fear and sadness any chance to control their heart. Such faith is the foundation of the psychological health.

Since if a human being was created without this weakness (the need to Allah), he wouldn't be in need of Allah; rather, he would be sufficed by his own strength. This would lead him to his misery (being away from Allah). Thus, he was created in this specific way to show his need to Allah, then Allah strengthens and supports him, and he becomes content.

“Verily, man (disbeliever) was created very impatient; Irritable (discontented) when evil touches him; and niggardly when good touches him. Except those who are devoted to Salat (prayers)" [Al-Ma'rej 70; 19-22]

Before commanding you to worship Him, Allah assured you by saying: "and to Him return all affairs (for decision). So worship Him (O Muhammad) and put your trust in Him." [Hud 11; 123]

Thus, you should ask the one who listens, pray to the almighty who could solve your problems, the one who loves you and cares about you, the powerful who will have mercy on you. Once you pray to Allah and ask Him, it confirms you believe in His being, hearing, sight, knowledge, power, and mercy: "Say O Muhammad to the disbelievers: My lord pays attention to you only because of your invocation to Him, but now you have indeed denied (Him)" [Maryam 19; 77]

Anas ibn Malik narrated that Prophet Muhammad, peace be upon him, said: “Allah said, make dua’a (supplication) and I will respond” [Tirmidhi]

Once you pray to Allah from the bottom of your heart and you are sincere of His knowledge, hearing, seeing, His ability to respond to you, He automatically loves you and has mercy on you, and, therefore, you are a believer.

"They have no Wali (Helper, Disposer of affairs, Protector) other than Him, and He makes none to share in His decision and His Rule." [Al-Kahf 18; 26]

So, a person realizes that God is able, while he is weak, that He is stronger than your enemies, and He is stronger than any other power in the universe. He is the creator of heavens and earth: “His is the Creation and the Commandment." [Al-Ara'f 7; 54]

This means whatever Allah created, its Commandment is His alone: "Allah is the creator of all things, and He is the Wakil (Trustee, Disposer of affairs, Guardian) over all things." [Az-Zumar 39; 62]

5- Every terrifying thing is under Allah's control. If you for example see wild animals that are tightly fastened by a secure, powerful, merciful and just party, what would your relation be with the wild animals or with the owner of these animals? Of course, with the owner of these animals, what is illustrated in this verse: "With Him (Allah). So plot against me, all of you, and give me no respite. I put my trust in Allah, my Lord and your Lord! There is not a moving (living) creature but He has the grasp of its forelock. Verily, my Lord is on the Straight Path (the truth)." [Hud 11; 55-56]

Hence, it's mostly unaccepted and incredible that Allah gives you in to any of His creatures, and then orders you to worship Him. So, He assured you by saying: "and to Him return all affairs (for decision). So worship Him (O Muhammad) and put your trust in Him." [Hud 11; 123]

For that: "Whatever of mercy (i.e. of good), Allah may grant to mankind, none can withhold it; and whatever He may withhold, none can grant it thereafter." [Fatir 35; 2]

If intelligent people rely on their intelligence, they do endless absurdities: "Those who disbelieve (in the Oneness of Allah and in the Message of the Prophet Mohammed) and hinder (men) from the Path of Allah (Islamic Monotheism), He will render their deeds." [Muhammad 47: 1]

Hence, believing in Allah the most powerful sends tranquility, stability, and victory; when someone believes everything is under God’s hands, it does not give fear and sadness any chance to control their heart. Having faith in Him is the foundation of psychological health.