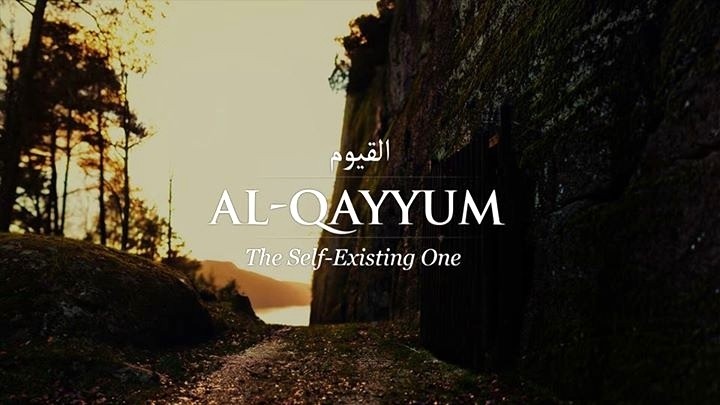 The Self-Subsisting,  The Self-Existing One upon Whom all others depend

The One whose nature it is to exist. The One who is free of any dependence on anything else for existence.

The Ever-Living, Self-Existing One who is the foundation upon which all things exist.
From the root q-w-m which has the following classical Arabic connotations:

to stand up, to rise up, to ascend, become high
to begin, to start, to come to pass
to arise, to set out
to be on-going, to exist
to be founded, to be built on
to undertake, to carry out, to manage
to make aright, straighten out, accurate, exact
to make righteous, upright

Abu Hurairah reported that whenever the Prophet, peace be upon him, was faced with a serious difficulty, he would raise his head to the sky and supplicate, "Subhan-Allah al-'Azim (glory be to Allah, the Mighty)." And when he implored seriously and strongly, he would say "Ya Hayyu, Ya Qayyum (O Ever-Living One, O Self-Existing One upon Whom we all depend)."    (hadith of Tirmidhi)

The attribute of al-Qayyûm is also nicely described by the words of Acts 17:28 which say:

in Him we live and move and have our being

The name al-Qayyûm also has much the same meaning as the Hebrew phrase in Exodus 3:14 which is written as:

and which is often translated as I am that I am, or I am that which I have become.

As Sri Aurobindo wrote in his commentary of the Isha Upanishad:

God is the only Being and all other existences are only His becomings.

(Also written as al-qayyum, al-qayyoom, the Self-Existing: ya qayyum, ya qayyoom)