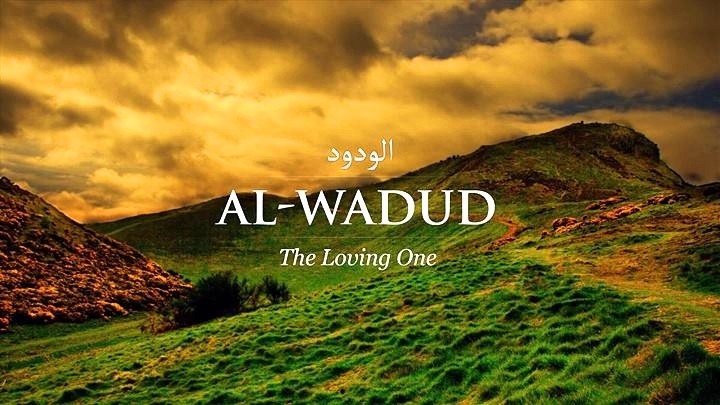 Allah’s divine name “Al-Wadoud” (The All-Loving), is an emphatic name derived from the Arabic word “Woudd”, which means “Houbb” (Love) as Allah says:

The Arabic word “Houbb” is, in turn, derived from “Habab Al-Asnan”, which means “whiteness, cleanliness and purity of teeth”. This means that those who love Allah, Most Gracious, are pure, chaste, sincere, and faithful. The word “Houbb” also indicates submission and obedience to the beloved. Hence, those who love Allah, Most Gracious, are dutiful and obedient to Him. They are modest, humble and submissive to the Lord, Exalted and All-High.

The word “Houbb” also means “instability”, which, in turn, means that those who love Allah are in constant instability as regards their relationship with their lord. True believers, who really love their Lord, undergo constantly changing feelings as regards their relationship with Him; while hypocrites, whose hearts are dead and, hence, emotionless, remain stable and unchangeable. Also, the word “Houbb” or “Habb” refers to a seed from which we get good fruits. This means that those who love the Lord their love is like a seed that produces a shady tree that, in turn, yields good fruits. In fact, the word “Houbb” (love) embraces all of the foregoing meanings: purity, chastity, submission, humbleness, instability, growth and good …etc.

Undoubtedly, there is a delicate difference between both words. “Al-Houbb” means “love as a noble feeling dwelling in the heart”; while “Al-Woudd” means “love substantiated by action”. In other words, if you love someone, your inner feelings towards him are called “Houbb” (i.e. love that exists in your heart), but when you translate such love into action by smiling to him, for example, or doing him a favor, this is “Woudd” (i.e. love that you put into action). If you offer him a present, it is “Woudd”. If you help him out of a problem, it is “Woudd”. If you visit him when he is ill, it is “Woudd”. If you offer him a present when he gets married, it is “Woudd”. In short, inner feelings of love are “Houbb”; while ostensible substantial acts of love are “Woudd”. All those who have “Woudd” must necessarily have “Houbb”, but not vice versa. This means that someone might love another but does not show that in his behavior, but if someone shows love to another, this means that he loves him.

And when God loves someone He honors and mercies him/her. However, Allah’s love for true believers is confirmed in Quran:

“O you who believe! Whoever from among you turns back from his religion (Islam), Allah will bring a people whom He loves and who love Him, (who are) humble towards believers, stern towards disbelievers, fighting in the Way of Allah and never feeling fear of the blame of a blamer. Such is the Grace of Allah, which He bestows on whom He wills; and Allah is All-Embracing, All-Knowing.” [Al-Ma’idah; 5:54]

Allah’s divine love for man is manifested by His divine protection, help, victory, success, sending down mercy upon his heart, sending down peace and tranquility upon him, providing him with all the things he needs. This is Allah’s divine love for man. But man’s love for Allah is substantiated by inclination and attachment, because if Allah forsakes him, or deprives him of His divine light, he feels unbearable pain and sorrow.

Once man loves God he gets inclined to Him, seeks refuge in His divine shade, light, holy manifestations, peace and tranquility, and he feels that Allah is always protecting and helping him. But Allah’s divine love for man means protection, help, support...etc. And “Al-Woudd” is the practical substantiation of both kinds of love.

How Allah Is Wadoud (All-Loving)?

1- The first point concerns Allah’s name “Al-Wadoud” (The All-Loving) is that He endears Himself to His slaves by bestowing His innumerable divine favors upon them. Therefore, logic and good reason show that the entire universe is nothing but a manifestation and substantiation of Allah’s Divine “Woudd” (i.e. Love) for mankind.

Thus Allah favors you with His never-ending favors and graces: good health, fresh water, delicious food and drink, fruits, fishes, birds...etc. When your heart and all other parts of your body work properly, this is one of Allah’s uncountable Divine Favors and Graces. Therefore, true believers should say what Allah’s holy prophets taught us to say:

The first divine gift man that receives from his Lord upon his birth is a very complicated operation, namely the so-called “Suck reflex”, which enables him, from the moment of birth, to take his mother’s breast tightly with his small mouth and start sucking. Without such reflex, human life would be impossible! Your mother is one of Allah’s great divine signs and favors, for she is naturally pre-disposed to consecrate, and even sacrifice, all her existence for her baby. She devotes all herself, her nerves, her feelings and emotions, her powers, and her efforts, for the sake of her baby.

Air that we breathe and water that we drink are great Divine Favors. What would you say about the different kinds of fruits?! Even more, God has endowed you with an intelligent mind with which you think and take up a certain vocation or profession and do it properly.

2- When in the Quran Allah says:

“And He (Allah) is the All-Forgiving, Al-Wadoud (the All-Loving)”, the word “Al-Wadoud” here means that Allah loves and honors His righteous slaves. It also means that His favors and blessings are but substantiations and manifestations of His Divine Love for them: “On those who believe and work deeds of righteousness, will (Allah) Most Gracious bestow love.”
[Maryam; 19:96]

3- Allah is “Wadoud” (All-Loving) for His slaves in the sense that He creates love and casts it among His slaves.

Therefore, Allah “Al-Wadoud” (the All-Loving), creates love and casts it among His slaves: fathers, mothers, husbands, mothers, siblings, and friends. They all enjoy love among them. To the same effect, Allah, Most Gracious, says:

“And among His Signs is that He has created for you wives from among yourselves that you may find repose in them; and He has put between you affection and mercy. Verily, in that are indeed Signs for a people who reflect.” [Ar-Rum; 30:21]

Who creates such affection and mercy? It is Allah, Most Gracious!

4- Allah is All-Loving in the sense that He seeks love of His slaves, just as they seek His divine love. And He casts love into their heart for one another and for Him. In this sense, this name has three meanings: love from the Lord for His slaves, love from slaves to their Lord, and love among slaves for one another. That is why Prophet Muhammad, peace be upon him, says “The zenith of wisdom, after belief in Allah, is to seek people’s love.”

Therefore, the wisest, cleverest and best thing a believer can do, after having believed in Allah, is to seek people’s love and friendship, in order to help them know the truth. To this, Allah says:

“And by a Mercy from Allah you dealt with them gently. And had you been severe and harsh-hearted, they would have broken away from around you; so pass over (their faults), and ask (Allah’s) Forgiveness for them, and consult them in the affairs. Then, when you have taken a decision, put your trust in Allah. Certainly, Allah loves those who put their trust (in Him).”
[Al-Imran; 3:159]

In other words, “Al-Woudd” is offered without request or imploration, but “Ar-Rahmah” is offered upon request, imploration or inferiority. When God created us, He was “Wadoud”, i.e. loving. We were nothing, but He created us, honored us, and bestowed His Innumerable divine favors and graces upon us: “O man! What has made you careless about your Lord, the Generous, Who created you and made you in due measures? In whatever shape He desires He constructs you.”

“Be cursed (the disbelieving) man! How ungrateful he is! From what thing did He (Allah) create him? From a semen He created him and then set him in due proportion. Then He made the Path easy for him. Then He caused him to die and caused him to be put in a grave. Then, when He wills, He will resurrect him. Nay! But he (man) has not done what He (Allah) commanded him.”
[Abasa; 80:17-23]