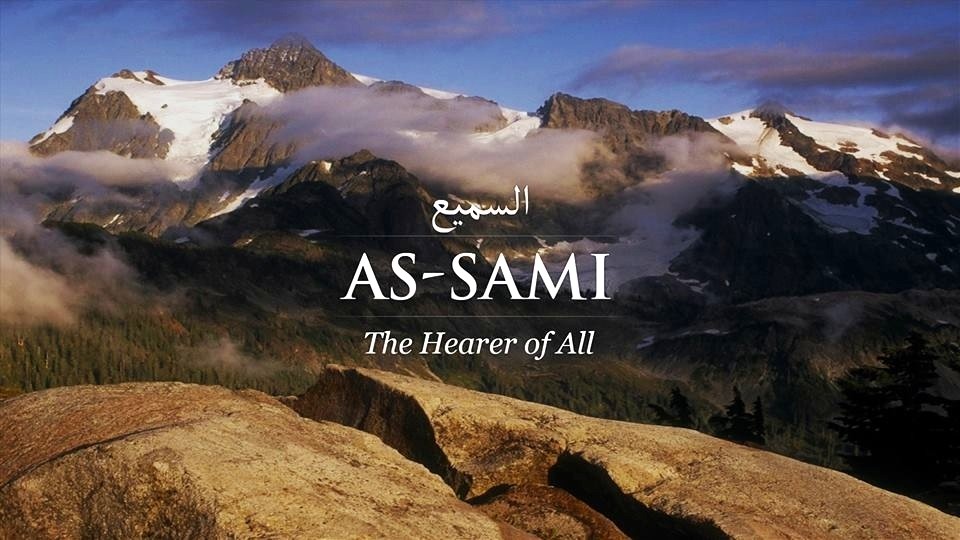 [Allah hears all sounds. He hears everything we say, no matter how privately we speak]
Allah is referred to as “the All-Hearing” forty-five times in the Qur’an. For instance, Allah says:

{And remember Abraham and Ishmael raised the foundations of the House (With this prayer): ‘Our Lord! Accept this service from us: For You are the All-Hearing, the All-knowing’.} (Al-Baqarah 2: 127)

{Allah has heard the plea of the woman who pleads with you (O Muhammad) concerning her husband and complains unto Allah. And Allah hears your discussions. Lo! Allah is All-Hearing, All-Seeing.} (Al-Mujadilah 58: 1)

`Aishah says about the last of these verses:

“Glory be to Allah whose hearing embraces all voices. The woman came to the Prophet, peace be upon him, with her plea. She had a grievance against her husband. I was in the corner of the house and did not hear what she said. Then Allah revealed: ‘Allah has heard the plea of the woman who pleads with you…’” (Sunan al-Nasa’i, Sunan Ibn Majah)

Allah hears all sounds. He hears everything we say, no matter how privately we speak. Allah says: {It is the same to Him whether one of you conceals his speech or declares it openly; whether he lies hidden by night or walks forth freely by day.} (Ar-Ra`d 13: 10)

Our most secretive speech is an open declaration before Allah. Indeed, He hears even our innermost thoughts. Everything is evident to Him, since He is its Creator and He is the one who enables and sustains all that unfolds.

Allah answers the prayers of those who beseech Him humbly with firm faith and who perform righteous deeds.

The One Who Answers Prayers

The idea that Allah hears every sound and every utterance is the most obvious connotation of His name “The All-Hearing”, but this noble name also conveys the meaning that Allah hears and answers our prayers.

Allah answers the prayers of those who beseech Him humbly with firm faith and who perform righteous deeds. This is why Prophet Muhammad, peace be upon him, used to seek refuge with Allah from “a prayer that goes unheard”. The Prophet did not mean that he feared Allah would not hear the prayer itself, but rather that Allah would leave the prayer unanswered.

It is the same when we say after bowing in prayer: “Allah hears the one who praises Him.” We mean that Allah answers those who praise Him and beseech Him in prayer. We have many opportunities in our formal prayer to beseech Allah. We can do so after the first takbir, and on some occasions before bowing, also while bowing, when we rise from bowing, during our prostrations, between the two prostrations, and at the very end of the prayer before we say our “Salam”. These are seven places where we beseech Allah with supplications during our formal prayers.

When we know that Allah hears every word we utter, it should make us fearful of uttering false or evil speech.

This is why, on the Day of Judgment, Allah will say to some of the evildoers: {And you did not veil yourselves against (the possibility that) your own ears and eyes and skins would bear witness against you, but you thought Allah did not know much of what you did. And that was the (evil) thought you entertained about your Lord which has tumbled you down into perdition, so you have become among the lost.} (Fussilat 41: 22-23)

Ibn Mas`ud informs us about the occasion on which this verse was revealed:
Three men assembled in front of the Sacred House. Their hearts which were poor of understanding, but their stomachs were well-fattened. One of them said: “Do you think that Allah can hear what we say?”

Then Allah revealed the verse: “And you did not veil yourselves against (the possibility that) your own ears and eyes and skins would bear witness against you…” (Sahih al-Bukhari, Sahih Muslim)