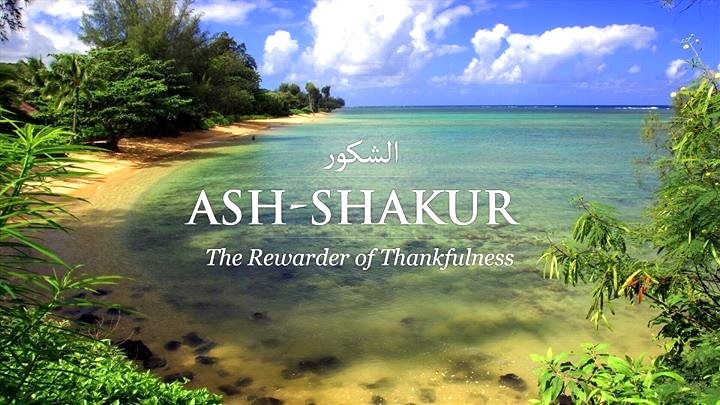 ALLAH: Ash-Shakour (The Most Appreciative)

[The one who creates favors is Allah and the one who enables you to benefit from such favors is also Allah.]

In the Quran, Allah says:

“If you give thanks, I will give you more; but if you are thankless, verily My Torment is indeed severe.” (Ibrahim 14: 7)

and this is what Allah’s beautiful divine name “Ash-Shakour” (The Most Appreciative) denotes.

Many Quranic verses take us to Allah’s attribute being Shakour (Most Appreciative):
“And they will say: ‘All Praise is to Allah, Who has removed from us (all) grief. Verily, our Lord is indeed Oft-Forgiving, Most Appreciative.”(Fatir 35: 34)

“And whosoever desires the Hereafter and strives for it with its due strife while he is a believer, then such are the ones whose strife shall be thanked (and rewarded).” (Al-Isra’ 17: 19)

How Allah is Shakour (Most Appreciative)?

1- As to quality, Allah the Most Appreciative grants His righteous slaves infinite happiness in the Hereafter in return for a limited number of years of devotion and dutifulness on their part in this present world.

Apropos that, you have to remember that any number, no matter how great it might be, is nothing if compared to infinity. In other words, if you live for a limited number of years during which you obey God, suppress you lusty desires and caprices, perform righteous good deeds, earn an honest living, attend religious lectures, read and understand the Quran, call for Allah and His religion, spend your money for the cause of Allah and His religion, all of this is nothing compared to Allah’s infinite recompense and reward. This means that He gives too much in return for too little.

Thus, Allah “Ash-Shakour” gives that which is infinite in reward for man’s limited good righteous work that he does in his short-termed human life. To this effect, Abu Hurairah, may Allah be pleased with him, quoted prophet Mohammad, peace be upon him, as saying: “Allah, All Mighty, says, ‘I have prepared for My righteous slaves good things that no human eye has ever seen, no human ear has ever heard of, and no human mind has ever thought of.’” [Sahih Al-Bukhari] To this effect Allah says: “And when you look there (in Paradise), you see bliss and a great kingdom.” (Al-Insan 76: 20). God calls that which He has prepared in paradise for His righteous slaves “a great kingdom”. Allah “Ash-Shakour” (the Most Appreciative) most generously grants you something priceless for something little you offer to Him.

2- The quantitative meaning of Allah’s name “Ash-Shakour” (the Most Appreciative) is that whatever good and righteous things you do for the sake of Allah; He thanks you and rewards you for them.

You might do someone a favor for which he cannot thank you unless he knows it. For example, you may buy a present and go to visit a sick person at home, but instead of giving the present to the patient himself, you give it to his son at the door before you get in. Does the patient thank you for the present even though he does not know about it? The answer is: of course, not. If he does not know about the present, how can he thank you for it? That is why Allah, the Most Appreciative, says:

“Why should Allah punish you if you have thanked (Him) and believed (in Him)? And Allah is Ever Most Appreciative, All-Knowing.” (An-Nisa’ 4: 147)

Hence, He, the All Knowing, knows all the good things that you do. If you rescue a butterfly, if you have mercy on someone, if you secure someone frightened, if you calm down the feelings of someone anxious, if you reassure someone worried, or if you feed someone hungry, it will be kept preserved with Allah, Most Appreciative, for you, no matter how numerous the good things that you do are.

4- If man obeys his Lord and the Lord rewards him for such obedience, this means that the Lord thanks him. So how would it be with Allah’s due reward to His slaves on the Day of Judgment? Undoubtedly, Allah is Most Appreciative! Divine Appreciativeness as manifested by reward means that if you do righteous good deeds, yours will be Paradise. You spend of your time, experience, or knowledge, you help other fellow humans, you are sincere and honest, you do your work properly, and you deal with other people honestly and faithfully: this means that you do the minimum, just like when you have a certain job and you do it properly, getting a reasonable wage in return. In other words, the minimum thing to do is to do good to other people, one way or another.

5- Allah is Most Appreciative that if you do well, He, most generously rewards you; and if you praise Him and speak well of Him, He makes people praise you and speak well of you. You praise Him among common people, but He, in return, praises you among prominent people. In a divine hadith, Allah, the Most Appreciative, says: “If My slave remembers Me to himself, I remember him to Myself; and if My slave remembers Me to a host of My slaves, I remember him to a better host.”

Appreciativeness on the Part of Man

“Ash-Shukr” (Appreciativeness) of a human being is of two kinds; verbal and virtual, neither of which can be achieved except by knowledge, which is the essence of Appreciativeness as you cannot be Appreciative unless you know. Virtual Appreciativeness, which is manifested by practical work, can be made clear by the following example: Someone grants you a house or does you a great favor. When you see his little son in the street, you offer him some sweats to eat. This is a kind of Appreciativeness to the father. Therefore, when a true believer does favors to other fellow humans; has mercy on them, honors them, secures them, provides them with food and drink, provides them with clothes, when he is compassionate to them, or when he does a favor to any creature, whatever it might be, a cat or a small dog for example, this means that he is Appreciative  (Thankful) to God.

God creates favors and bestows them upon you, either directly or by means of another fellow human, whom He gives such favors, inspires and enables to offer to you.

So, since God is self-sufficient and is in need of no one: He feeds and does not need to be fed; therefore, it is impossible to offer a direct gift or present to Him; but you can express your gratitude to Him by doing good to His creatures in whatever ways. You have Allah’s creatures to do well to, a good thing that Allah will keep preserved for you. In regard to animals, if you provide a hungry animal with food – as some people enjoy feeding birds and buying seeds for them – because you know that animals are God’s creatures, this means that you are Appreciative to God. And if you know Allah and recognize His divine grace to you, you know how to deal with His creatures. Allah says:
“And Ever Great is the Grace of Allah unto you.” (An-Nisa’ 4: 113)

And for all that God gave us we should be grateful; He brought us into existence and gave us a shape:

“Allah: it is He Who has made for you the earth as a stable dwelling place and the sky as a canopy, and has given you shape and made your shapes good looking and has provided you with good things. Such is Allah, your Lord. So Blessed is Allah, Lord of all worlds.” (Ghafir 40: 64)

Thus, you are Appreciative either the Creator, Allah, or to His creatures and your fellow humans. Still, it is impossible for you to be Appreciative enough to Allah, because in order to thank Allah for each and every divine favor of His, you have to know all of His favors He bestows upon you; and since it is impossible for you to know all of Allah’s favors upon you, your being fully Appreciative to Him is also impossible. To this effect He says:
“And if you would count Allah’s Favors, never could you be able to count them. Truly! Allah is Oft-Forgiving, Most Merciful.” (Al-Nahl 16: 18)

He creates favors and bestows them upon you, either directly or by means of another fellow human, whom He gives such favors, inspires and enables to offer to you. Thus, the one who creates favors is Allah and the one who enables you to benefit from such favors is also Allah. For that, thanks should be given to Allah! Nevertheless, such fellow human being, who offers you any of Allah’s divine favors out of his own free will, also deserves your thanks. That is why Allah’s messenger says: “He who does not thank people does not thank Allah”

How a favor of Allah differentiates from that of a fellow human?

1- You may need something and ask someone to offer such thing to you, but he may be in need of it and, therefore, cannot give you such thing. But Allah is Self-Sufficient and free from all needs. Therefore, when you ask Him for anything, He gives it to you most easily. This is the first point of difference.

2- More importantly, a fellow human may be able to give you something, but he may not be available when you need him. He may be somewhere else and, therefore, cannot offer you such thing. But Allah is always with you wherever you are and this is the second point of difference.
3- Another point of difference is that if you are not Appreciative enough to a fellow human, he may immediately withhold such thing from you. But Allah, All Mighty, says: “O My slave! You have an obligation to fulfill to Me; and I have provision to provide you. If you fail to fulfill the obligation (you have to fulfill) to Me, I do not fail to provide you with your provision.”

4- Moreover, if a human gives you or lends something, he may very often remind you, either privately or publicly, of such thing. Also, a human being may fail to do you a favor because he is unable to do so or he is not available and, therefore, cannot be reached. Also, if you fail to be Appreciative enough to a human being who does you a favor, he may withhold such favor from you or boastfully remind you of such favor. This is by no means the case with God, the most generous and most Appreciative.