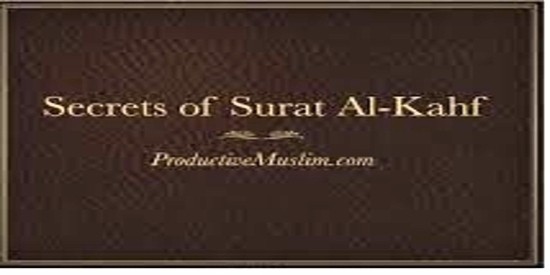 Ever wondered why Prophet Muhammad(SAW) asked us to recite Surat Al-Kahf every Friday?
Let’s ﬁnd out today inshaAllah…

This Surah has Four stories in it,having some morals,lets see them and understand what they are saying to us:

1) The People Of The Cave
Its the story of young men who lived in a disbelieving town, so they decided to migrate for the sake of Allah and run away. -Allah rewards them with mercy in the cave and protection from the sun – They woke up and found the entire village believers.

2) The Owner Of Two Gardens
A story of a man whom Allah blessed with two beautiful gardens, but the man forgot to thank the One who blessed him with everything and he even dared to doubt Allah regarding the afterlife.So His garden was destroyed – He regretted ,but was too late and his regret did not beneﬁt him .

3) Musa(AS) and Khidr(AS)
When Musa(AS) was asked-“Who’s the most knowledgeable of the people of earth?”” Musa(AS) said:Me…,but Allah revealed to him that there’s someone who Knows more than him.Musa(AS) traveled to the man and learnt how the Divine Wisdom can sometimes be hidden in matters which we perceive as bad.

4) Dhul-Qarnayn
Its a story of the great King that was given knowledge and power and was going around the world,helping people and spreading all that’s good.He was able to overcome the problem of Yajooj-Majooj and build a massive dam with the help of people whom he could not even understand.

In the middle Allah mentions Iblees as the one who stirs these trials:
Behold! We said to the angels “Bow down to Adam”: they bowed down except Iblis. He was one of the Jinns, and he broke the Command of his Lord. Will ye then take him and his progeny as protectors rather than Me? And they are enemies to you! Evil would be the exchange for the wrongdoers!

Now let us see what’s the relationship between Surat Al-Kahf and the Dajjal (Anti-Christ)?

Dajjal will appear before Day of Judgement with the 4 trials:

***He’ll ask people to worship him and not Allah:

***He’ll be given powers to start/stop rain and tempt people with his wealth:

Trial of with his wealth. .

***He’ll trial people with the “knowledge” and news he gives them:

How to survive these trials? The answers are in Surat Al-Kahf

# Survival Kit 1: Good companionship.
“And keep thy soul content with those who call on their Lord morning and evening, seeking His Face; and let not thine eyes pass beyond them, seeking the pomp and glitter of this Life; no obey any whose heart We have permitted to neglect the remembrance of Us, one who follows his own desires, whose case has gone beyond all bounds.” (Surat Al-Kahf, verse 28)

# Survival Kit 2: Knowing the Truth of this World .
“Set forth to them the similitude of the life of this world: It is like the rain which we send down from the skies: the earth’s vegetation absorbs it, but soon it becomes dry stubble, which the winds do scatter: it is (only) Allah who prevails over all things” (Surat Al-Kahf, verse 45)

# Survival Kit 3: Humbleness.
“Moses said: “Thou wilt ﬁnd me, if Allah so will, (truly) patient: nor shall I disobey thee in aught.””(Surat Al-Kahf, verse 69)

# Survival Kit 4: Sincerity.
“Say: “I am but a man like yourselves, (but) the inspiration has come to me, that your Allah is one Allah. whoever expects to meet his Lord, let him work righteousness, and, in the worship of his Lord, admit no one as partner.” (Surat Al- Kahf, verse 110)

# Survival Kit 5: Calling to Allah .
“And recite (and teach) what has been revealed to thee of the Book of thy Lord: none can change His Words, and none wilt thou ﬁnd as a refuge other than Him.” (Surat Al-Kahf, verse 27)

# Survival Kit 6: Remembering the HereAfter .
“ One Day We shall remove the mountains, and thou wilt see the earth as a level stretch, and We shall gather them, all together, nor shall We leave out any one of them. And they will be marshalled before thy Lord in ranks, (with the announcement), “Now have ye come to Us (bare) as We created you ﬁrst: aye, ye thought We shall not fulﬁl the appointment made to you to meet (Us)!”: And the Book (of Deeds) will be placed (before you); and thou wilt see the sinful in great terror because of what is (recorded) therein; they will say, “Ah! woe to us! what a Book is this! It leaves out nothing small or great,but takes account thereof !” They will ﬁnd all that they did, placed before them: And not one will thy Lord treat with injustice.” (Surat Al-Kahf, verses 47-49)