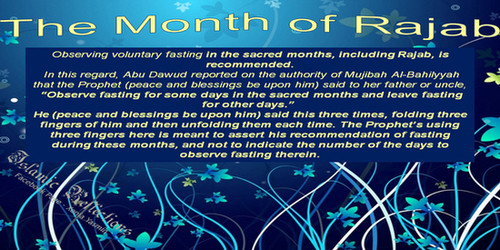 Rajab and Its Importance

The planet earth is created by the Almighty Allah, yet some land, some places are more sacred than others. Offering prayers at Haram Sharif in Makka-e-Muazzamaa and Madina Munawara carry more virtues than offering prayers at other places.

In the same manner some months are more sacred than others. One such sacred month is the month of Rajab.

Paradise is the reward for the one who fasts on the Navchandi Thursday (the first Thursday that comes after moon is sighted). This is said by Allah’s Messenger and is recorded in Kitabul Barkaat.

Observe just one fast in the month of Rajab, and guess how much virtue you can get for that one fast. Allah’s Messenger says, “The one who observes one fast in rajab it is as if one has fasted for forty years.”

Allah’s Messenger says, “In Paradise there is a canal named Rajab. Its water is whiter than milk, cooler than ice and sweeter than honey. The one who observes even a single fast in Rajab, he/she will be entitled to drink its water.”

Here is a tradition reported By Hazrat Abu Darda (Allah be pleased with him). Allah’s Messenger says, “The one who observes a fast in Rajab, it is as if he/she has observed fast for the whole life and remained busy in nights worshipping the Almighty Allah.”

Once a companion, Hazrat Sobaan (Allah be pleased with him) was with Allah’s Messenger. They came across a few graves. Allah’s Messenger became sad and said, “Sobaan, people buried here are punished. I prayed to Allah to curtail their punishment, Had they observed a single fast in Rajab and remained awake for just one night worshipping, they would have been saved from this punishment in their graves.” The companion asked, “Fasting only for a day and remaining awake busy worshipping would have saved them?”

Dear readers, such is the blessing of Rajab. Grab it and earn virtues.

A companion Hazrat Azizuddin Bin Abdussalam (Allah be pleased with him) says, “That person is ignorant who stops another from fasting in the month of Rajab.”

If a person is not in a position of observing fast in Rajab, is there a way out for him/her to earn virtues? Of course, there is. Allah’s Messenger answered, “If a person is unable to observe fast in Rajab, then he should give a roti (bread) in charity (Khairat) every day.”

Again someone raised a question, “What one should do if one is not in a position to offer even that much. He replied, “Here is a supplication. Recite it every day.”

Allah’s Messenger says, “One the first night of Rajab, the Almighty Allah looks at my people and pardons the sinners, gives rewards to those who offer repentance (taubaa) and allows His nearness to those who do His remembrance. The on ewho observes fasts for the whole month of Rajab is called by the Almighty Allah and He declares, “O My servant, you have a right over me. Ask whatever you want. I swearupon me. Ask whatever you want. I swear upon My Honour and Glory that I will not reject your plea. You will get a place beneath My (Divine) Throne and you are My loved one among all my creations. You deserve respect and there is no curtain between you and Me.”

Companion Hazrat Abu Saeed (Allah be pleased with him) says, “I visited Allah’s Messenger on the first day of Rajab. He asked me, ‘Which is the most blessed and virtuous day? I said that I did not know. Allah’s Messenger said, ‘Hazrat Jibreel (Peace be on him) came to me and said, “On the first night of Rajab, the Almighty Allah Commands an angle calls out and the angel calls out ‘The moon of the month of repentance is sighted. Good news for those who appeal to Allah for being forgiven’.”

Wouldn’t you like to keep yourself away from Hell?”

It is reported by Hazrat Ibne Mas’ood, Allah’s Messenger says, “The one who fasts for three days in Rajab and remains awake for three days in Rajab and remains awake for three nights worshipping Allah, it is as if he has fasted for three thousand ears and remained awake busy worshipping for three thousand years. His seventy major sins are forgiven (according to sahih hadis, major sins are forgiven only after offering repentance taubaa, however, minor sins are forgiven by doing different kinds of virtuous deeds. Only Allah knows the facts). His seventy needs are fulfilled in the grave and seventy deeds will fly and reach its doers on the Day of Judgement. Seventy needs of that person will be fulfilled when he will come to cross the bridge siraa (pool-siraat).”

It is mentioned in Guniyatut Taalibeen written by Piraan-e-Pir Gausul Aazam Dastagir Hazzrat Shaikh Mohi-yuddin Abdul Qadir Jilani (Allah’s Mercy be on him) that, “Of course, Rajab is a great month and the one who observes even a single fast in it, then the Almighty Allah gives him reward of fasting for three thousand years.”

Allah’s Messenger says that Rajab is one of the sacred months. Prophet Hazrat Nooh (Peace be on him) boarded the boat in this month. He observed a fast and ordered his companions to fast.

It is not possible for us to make out how many miles a crow must be flying in its lifetime. This example signifies the value of charity being done in Rajab.

Hazrat Ali (Allah be pleased with him) reported Allah’s Messenger as saying, “In the month of Rajab, ask for forgiveness extensively (i.e. recite istegfar) because this is the month in which the Almighty Allah frees some people from Hell.”

Dear readers, it does not take much time to recite istegfar, but its reward is si rich, that no wise person would like to miss it. Who knows how many of us will get the opportunity of earning such rich reward int eh next year, so grab the opportunity before the time runs out.

Here is one more supplications, carrying a magnificient reward. Hazrat Ibne Abbas (Allah be pleased with him) reported Allah’s Messenger as saying’ “The one who recites the following supplication in the months of Rajab, Sha’abaan and Ramzaan between the Zuhar and Asr namaaz, then the Almighty Allah Commands the angels who are recording a person’s deeds, to destroy sins from his book of deeds.

It is recorded that in every night of Rajab, the Almighty Allah says, “Rajab is My month.In this month, I will grant forgiveness to those who ask it from Me, I will fulfil his need if he pleads to me.