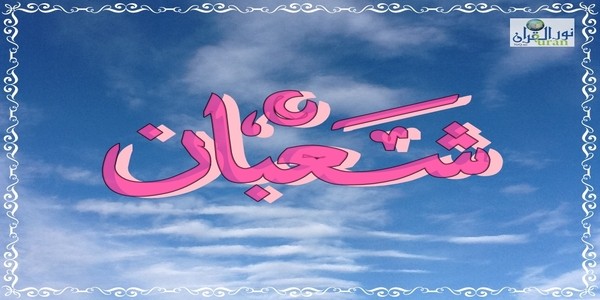 Blessings of The Month of Sha'baan

Sha'baan:Sha’baan is the name of the (Eighth) month, and it is so called because in this month the Arabs used to disperse (tasha’aba) in search of water, or it was said that they dispersed to carry out raids and forays. Or it was said that it is so called because it sha’aba (branches out or emerges) i.e., it appears between the months of Rajab and Ramadaan. The plural forms of the word Sha’baan are Sha’baanaat and Sha’aabeen.Sha'baan is one of the meritorious months for which we find some particular instructions in the Sunnah of Prophet Muhammad, Sall-Allahu alayhi wa sallam. It is reported in the authentic ahadith that Prophet Muhammad, Sall-Allahu alayhi wa sallam, used to fast most of the month in Sha'baan. These fasts were not obligatory on him but Sha'baan is the month immediately preceding the month of Ramadan.

Fasting in Sha'baan:‘Aa’ishah (may Allaah be pleased with her) said:
“The Messenger (peace and blessings of Allaah be upon him) used to fast until we thought he would never break his fast, and not fast until we thought he would never fast. I never saw the Messenger of Allaah fasting for an entire month except in Ramadaan, and I never saw him fast more than he did in Sha’baan.” (Narrated by al-Bukhaari, no. 1833; Muslim, no. 1956).

It was reported in al-Saheehayn that Ibn ‘Abbaas said:
“The Messenger of Allaah (peace and blessings of Allaah be upon him) did not fast any entire month apart from Ramadaan.” (Narrated by al-Bukhaari, no. 1971, and Muslim, no. 1157). Ibn ‘Abbaas regarded it as makrooh to fast any entire month apart from Ramadaan. Ibn Hajar (may Allaah be pleased with him) said: “He observed more voluntary fasts in Sha’baan than in any other month, and he used to fast most of Sha’baan.”

Usaamah ibn Zayd (may Allaah be pleased with them both) said:
“I said, ‘O Messenger of Allaah, I do not see you fasting in any other month like you fast in Sha’baan.’ He said, ‘That is a month to which people do not pay attention, between Rajab and Ramadaan, and it is a month in which deeds are lifted up to the Lord of the Worlds. I like for my deeds to be lifted up when I am fasting.’” (Narrated by al-Nasaa’i, see Saheeh al-Targheeb wa’l-Tarheeb, page 425). According to a report narrated by Abu Dawood (no. 2076) she said:“The most beloved of months for the Messenger of Allaah (peace and blessings of Allaah be upon him) to fast in was Sha’baan, and his fasting in Sha’baan was continuous with his fasting in Ramadaan.” (Classed as saheeh by al-Albaani, see Saheeh Sunan Abi Dawood, 2/461).

Ibn Rajab (may Allaah have mercy on him) said:
“Fasting in Sha’baan is better than fasting in the Sacred Months, and the best of voluntary fasts are those that are (observed in the months) closest to Ramadaan, before or after. The status of these fasts is like that of al-Sunan al-Rawaatib which are done before and after fard (prayers) and which make up for any shortfall in the number of obliagtory prayers. The same applies to fasts observed before and after Ramadaan. Just as al-Sunan al-Rawaatib are better than other kinds of voluntary prayers, so fasts observed (in the months) before and after Ramadaan are better than fasts at other times.

The phrase “ Sha’baan is a month to which people do not pay attention, between Rajab and Ramadaan”indicates that because it comes between two important months, the Sacred Month of Rajab and the month of fasting, people are preoccupied with those two months and they do not pay attention to Sha’baan. Many people think that fasting in Rajab is better than fasting in Sha’baan, because Rajab is one of the Sacred Months, but this is not the case.

These reports indicate that fasting in the month of Sha'ban, though not obligatory, is so meritorious that Prophet Muhammad, Sall-Allahu alayhi wa sallam, did not like to miss it.

Fasting towards the end of Sha'baan:
Ibn `Abbas (May Allah be pleased with them) reported: The Messenger of Allah (peace and blessings of Allaah be upon him) said,

"Do not observe Saum (fasting) before the advent of Ramadan. Observe Saum at sighting of the crescent of Ramadan and terminate it at sighting the crescent (of Shawwal). If the sky is overcast, complete (the month as) thirty (days).'' [At-Tirmidhi].Ammar bin Yasir (May Allah be pleased with them) reported: He who observes the fast on a doubtful day, has in fact disobeyed Abul-Qasim, (i.e., Messenger of Allah (PBUH)). [Abu Dawud and At-Tirmidhi].

"Doubtful day'' here signifies the day of 30th Sha`ban. In other words, if the moon is not sighted on 29th of Sha`ban because of clouds and a person observes Saum, he will be in doubt whether it is the 30th of Sha`ban or the 1st of Ramadan. Thus, there is no need to observe Saum on a doubtful day, and one should complete thirty days of the month of Sha`ban.