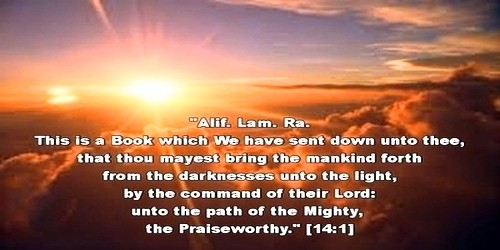 "Call people to the path of your LORD with wisdom and goodly exhortation" [16:125]

Call of Prophet Ibrahim (peace be upon him) to his people:

{Said Abraham: "Have you, then, ever considered what it is that you have been worshiping - you and those ancient forebears of yours? Now as for me, I know that, verily, these false deities are my enemies, and that none is my helper save the Sustainer of all the worlds, who has created me and is the One who guides me, and is the One who gives me to eat and to drink, and when I fall ill, is the One who restores me to health, and who will cause me to die and then will bring me back to life, and who, I hope, will forgive me my faults on Judgment Day! O my Sustainer! Endow me with the ability to judge between right and wrong, and make me one with the righteous, and grant me the power to convey the truth unto those who will come after me, and place me among those who shall inherit the garden of bliss! And forgive my father for, verily, he is among those who have gone astray, and do not put me to shame on the Day when all shall be raised from the dead: and when only he will be happy who comes before Allah with a heart free of evil!"}.
(Ash-Shu`araa’ 26: 75-89)

Call of Prophet Nuh (pbuh) to his people:

{And convey unto them the story of Noah-when he said unto his people: "O my people! If my presence among you and my announcement of Allah's messages are repugnant to you -well, in Allah have I placed my trust. Decide, then, upon what you are going to do against me, and call to your aid those beings to whom you ascribe a share in Allah's divinity; and once you have chosen your course of action, let no hesitation deflect you from it; and then carry out against me whatever you may have decided, and give me no respite! But if you turn away from the message which I bear, remember that I have asked no reward whatever of you: my reward rests with none but Allah, for I have been bidden to be among those who have surrendered themselves unto Him"} (Yunus 10:71-72)

Call of Prophet Musa (pbuh) to Pharaoh and his people:

{Said Pharaoh: "And what and who is that 'Sustainer of all the worlds'?" Moses answered: "He is the Sustainer of the heavens and the earth and all that is between them: if you would but allow yourselves to be convinced!" Said Pharaoh unto those around him: "Did you hear what he said?" And Moses continued: "He is your Sustainer, too, as well as the Sustainer of your forefathers of old!" Pharaoh exclaimed: "Behold, your 'apostle' who claims that he has been sent unto you is mad indeed! But Moses went on: "He of whom I speak is the Sustainer of the east and the west and of all that is between the two"- as you would know if you would but use your reason!" Said Pharaoh: "Indeed, if you choose to worship any deity other than me, I shall most certainly throw you into prison!" Said he: "Even if I should bring about before you something that clearly shows the truth?" …} (Ash-Shu`araa’ 26:22-30)

Call of Prophet `Isa' (pbuh) to his people:

{But Jesus said: "Behold, I am a servant of Allah. He has vouchsafed unto me revelation and made me a prophet, and made me blessed wherever I may be; and He has enjoined upon me prayer and charity as long as I live, and has endowed me with piety towards my mother; and He has not made me haughty or bereft of grace. Hence, peace was upon me on the day when I was born, and will be upon me on the day of my death, and on the day when I shall be raised to life again!’’}
(Maryam 19 30-33)

Call of Prophet Muhammad (pbuh) to his people:

"Verily the most veracious discourse is the book of Allah. The most trustworthy handhold is the word of piety. The best of religions is the religion of Ibrahim. The best of traditions is the Sunnah of Muhammad. The noblest speech is the mentioning of Allah. The finest of narratives is this Qur’an. The best of affairs is that which has been firmly resolved upon. The worst matters are those which are created without Godly sanction. The best of ways is the one trodden by the Prophets. The noblest death is the death of a martyr. The most miserable blindness is waywardness after guidance. The best of knowledge is that which is beneficent. The best guidance is that which is put into practice. The worst blindness is the blindness of the heart. The upper hand is better than the lower (i.e., it is better to give than to receive). The little that suffices is better than the abundant and alluring. The worst apology is that which is tendered when death stares one in the face. The worst remorse is that which is felt on the Day of Resurrection. Some men do not come to the Friday prayer, but with hesitance and delay. And some of them do not remember Allah but with reluctance. The tongue that is addicted to false expression is a bubbling spring of sins. The most valuable possession is contentment of the heart. The best provision is that of piety. The highest wisdom is the awe of Allah. The best thing to be cherished in the hearts is faith and conviction; doubt is part of infidelity. Impatient wailing and fulsome praise of the dead is an act of ignorance. Betrayal leads one to the fire of Hell. Liquor is the mother of evils. Each one of you must resort to a place of four cubits (in the grave). Your affairs will be decided ultimately in the next life. He who pardons is himself granted pardon. He who forgives others, is forgiven by Allah. He who represses anger, Allah rewards him. He who faces misfortunes with perseverance, Allah compensates him. He who shows patience and forbearance, Allah gives him a double reward. He who disobeys Allah, Allah chastises him". (Reported by al-Bayhaqi)