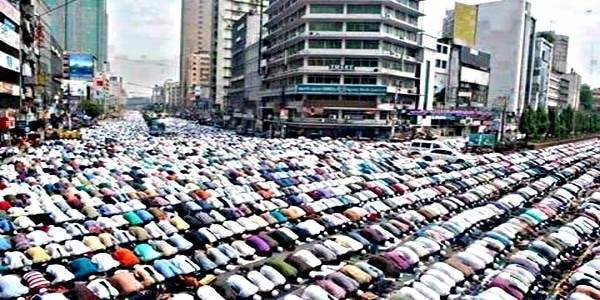 10 Facts about the Day of Jumu'ah

One of the blessings with which the Muslim nation has been endowed is the day of Jumu'ah, or Friday. The Messenger of Allah, , said: “The best day the sun rises over is Friday; on it Allah created Aadam. On it, he was made to enter paradise, on it he was expelled from it, and the Last Hour will take place on no other day than Friday.”[Ahmad and At-At-Tirmithi].

Imaam Ibn Katheer,  said, "It was named Jumu'ah because it is derived from the word Al-Jam' in Arabic which means to gather, as Muslims gather on this day every week, and Allah has commanded the believers to gather for His worship, as He says that which means:{"O you who believe! When the call is proclaimed for Jumu`ah (Friday prayer), come fast to the remembrance of Allah"}[Quran, 62: 9] meaning be keen to go and attend it."

Here are some other virtues and facts about the Day of Jumu'ah:
·        It includes the congregational Jumu'ah prayer, which is one of the obligatory acts in Islam and one of the great gatherings of the Muslims. Allah The Almighty will seal the heart of whoever abandons and slights this, according to the Prophet , in a Hadeeth (narration) in the book of Imaam Muslim .
·              The day of Jumu'ah includes an hour during which all supplications are accepted. Abu Hurayrah, may Allah be pleased with him, narrated that the Messenger of Allah , said: "On (the day of) Jumu'ah is an hour during which Allah gives to a Muslim servant standing in prayer whatever he asks for.”[Al-Bukhari and Muslim].

·              It is an 'Eed, i.e., a recurrent holiday and celebration. Ibn 'Abbaas,may Allah be pleased with him, narrated that the Messenger of Allah said: "Jumu'ah is a day of celebration, so whoever attends it should perform Ghusl (bathing) beforehand." [Ibn Maajah].

·              It is a day on which sins are forgiven, as narrated by Salmaan, may Allah be pleased with him, who narrated that the Prophet,   said: “Any man who performs Ghusl on Friday, perfumes himself if he has perfume, wears the best of his clothes, then goes to the mosque and offers as many prayers as he wishes while not harming anybody, then listens quietly while the Imaam speaks until he offers the prayer, will have all his sins between that Friday and the next forgiven.” [Al-Bukhari].

·              When walking to attend the Friday sermon, a Muslim gets the reward of both praying Qiyaam (i.e., the night prayer) and fasting a full year. Aws ibn Aws, may Allah be pleased with him, narrated that the Prophet, , said: “Whoever performs Ghusl on Friday after having sexual intercourse with his wife, then goes early to the mosque and attends from the beginning of the Khutbah and draws near to the Imaam and listens to him attentively, Allah will give him the full reward of fasting all the days of a year and observing night-vigil on each of its nights for every step that he took towards the mosque.”[Ibn Khuzaymah, Ahmad].