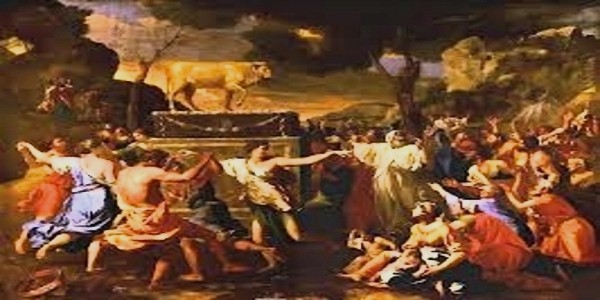 The lesson of the importance of patient, steadfast trust in God and God's willingness to forgive, taught by the incident of the golden cow, is one of many mighty lessons taught in the Torah (Exodus32) and in the Qur'an (7:148-153).

The lesson of Sabr is universal, but the details differ, so that people of faith within the three religions of the Children of Abraham can learn some additional perspectives from each others religious tradition; and thus learn greater respect for each other.

So  I believe that Jewish, Christian and Muslim religious leaders should always try to harmonize differences between the Sacred Scriptures of Moses, David, Jesus and Muhammad, and avoid claiming that only one Holy Book (ours) can be true.

As a Reform Rabbi, I believe that Jewish spiritual leaders should modify Jewish tradition as social and historical circumstances change and develop. I also believe we should not make religion difficult for people to practice.

These are lessons prophet Muhammad taught 12 centuries before the rise of Reform Judaism in the early 19th century.

I decided to retell (adding some humor about Miriam and the cat Goddess) the narrative lesson of the golden cow/calf , combining details from both Islamic and Jewish sources, because I want to show  how it is possible to see scriptural differences as complementary rather than contradictory:

Everyone was worried that something bad had happened to Moses. He had gone up on the right side of Mount Sinai more than 20 days ago to speak with God. He had not yet returned.

Only a few months ago the Children of Israel had been slaves in Egypt. Now they were free. But when their great leader Moses did not come back from the top of Mount Sinai, many of them feared they had been left all alone in the desert. Without Moses they felt abandoned by God. These fears began to spread to a large number of the Children of Israel. And then it happened.

There was an Egyptian magician named As-Samiri, who along with many other non-Jews had left Egypt with the Jewish people. As-Samiri started telling people that they should make an image of a God to lead them, since no one knew what had happened to that old man Moses.

Actually, As-Samiri and a few of his friends had already asked Moses to make an image of a god to lead them, not long after the Children of Israel had safely crossed the sea of Reeds. As-Samiri said, “Oh Moses, make for us a god just as other people have gods”. Moses replied, “You are indeed people given to ignorance... shall I seek a god for you other than the one God, when He has exalted you above all other people.”

With these words Moses had silenced As-Samiri, but now with Moses missing, As-Samiri started urging the Children of Israel to force Prophet Aaron, the brother of Moses, to make a statue of a god so they could be safe and secure.

At first, very few people listened to As-Samiri or his friends. But after Moses had been gone for almost 30 days, more people began to agree with him. As-Samiri told people that in addition to the God of Abraham, who no one could see, people need another god that they could see. “In Sumeria where my family came from, and in Egypt where we all lived, there are lots of paintings and statues of many different gods, both big and small. When you see a picture or a statue of a god, you can feel god is very close to you” As-Samiri said.

When Miriam the Prophet, the older sister of Moses and Aaron, heard what the Egyptian magician was saying she objected strongly. “The Ten Commandments forbid the Jewish people to make any statues or paintings of God. The Ten Commandments forbid us to have any God other than the God who freed us from slavery in Egypt. God saved you from your enemy, Pharaoh and his army, and made a covenant with you through Moses, on the right side of Mount Sinai. Don’t even think about making an image of our God, or of any other god. There is no other god, and no one can be associated with the one God.”

One day a large crowd of people, led by As-Samiri and his friends, gathered around Prophet Aaron, and demanded that he either tell them when Moses would return, or make an image for them to revere.

At first, Aaron told the Israelites that the delay in Moses’ return was only a test of their trust in God. Aaron could not tell them when Moses would return because he did not know. More than 30 days had passed since Moses went up to the top of Mount Sinai. Aaron would not lie to them. They just had to trust in God. Most of the Israelites accepted this; but not the group led by As-Samiri and his friends.

Aaron was worried that if he openly refused to make the image, the Children of Israel would split into groups who would fight with each other. That could lead to a civil war, something that must be avoided. If he rebuked them as directly as Miriam the Prophet had, they might rebel and follow the lead of As-Samiri and make a statue, and so disobey both God and His prophets. So Aaron decided to outwit them. He asked the people, “Which god do you want to select for the image?”

Since the Jewish people had lived all their lives in Egypt, they wanted an Egyptian God. But when Aaron asked them which one of the several dozen Gods the Egyptians worshipped they wanted for their image, they began to argue among themselves.

Some wanted to make an image of Bastet the cat Goddess, while others wanted Amon the ram God. Some wanted to worship Osiris the God of the underworld; some wanted his sister the Isis cow. who gave birth to the sacred Apis bull, and was the Goddess of magic and magicians like As-Samiri. Others wanted Isis' son Horus, who appeared as a hawk, and was the ancestor of all the divine Pharaohs.

They argued with each other for several days while Aaron kept hoping that Moses would return. But Moses still didn't return. As-Samiri said they should worship either the cow Goddess Isis or the cow Goddess Hathor, who was the Goddess of music, dancing, fertility and childbirth.

Either Goddess could save them from dying in the desert, and if they made a cow idol each Goddess would think it was for her, and both would help them. Many, but not most of the Children of Israel were very insecure because Moses had been gone for more than 37 days now, so they decided to follow As-Samiri’s direction.

When they told Aaron they were going to make an image of Isis/Hathor, the cow Goddess, Aaron again tried to stop them by outwitting them. Aaron told them that the image would have to be made out of gold. Since a cow was very big they would need lots of gold. They would have to collect all the gold earrings from all the men, all the women and all the children in the camp, so they would have enough gold to make a statue of a cow.

Aaron was sure that most of the people would refuse to give up their gold earrings. And indeed, none of the woman, and very few of the men were willing to donate their gold jewelry to make a golden cow. But there were about 3,000 men who did offer their gold rings to As-Samiri and his followers.

Two days later a dozen baskets filled with gold rings were brought to Aaron who was surprised and saddened. Now Aaron was trapped by his own words. He asked Miriam the Prophet for advice.

Aaron did not want to say this because he knew it would cause a violent division among the Children of Israel, and Moses would accuse him of dividing the people into enemy camps. Also Aaron had no doubt that Moses would return very very soon, and when Moses did return he would strongly rebuke As-Samiri and all of the people who supported him.

That would be a good lesson for the majority of the Children of Israel who did not want to make the idol. So Aaron told the people they could make a small calf and place it on top of a big stone base, but it would never be a God. It could not hear their prayers nor would the idol teach them how to be better people. Aaron hoped that this would discourage them.

But As-Samiri, the Egyptian magician, told his followers, “I have seen something you are unable to see” and he took a handful of something (they couldn't see what it was), added it to the gold rings and cast the gold in a fire and formed it as the cow Goddess Isis/Hathor. As-Samiri formed the statue hollow so it would look very big.

Then As-Samiri secretly made hundreds of tiny pinholes in a line from its nose down its back to its tail. He could see the tiny holes but no one else could. As-Samiri knew that when the wind blew, the holes in the calf would make a mooing sound, and the people would be very impressed.

When the golden calf was done, Aaron felt very sad but he did not give up hope that Moses would soon return. Tomorrow would be 40 days since Moses went up to the top of Mount Sinai. Aaron decided to stall for one more day by saying they would celebrate with the calf the next day.

Early the next morning only about three thousand men, less than one out a hundred of all the Children of Israel, came to eat, drink, dance and even worship the golden calf. As the men stood around watching to see what would happen, the wind blew and the calf made a mooing sound. “This is your God O Israel who brought you out of Egypt” shouted As-Samiri. “Bow down and worship Isis/Hathor.”

“Don’t do it!” shouted Aaron and his sister Miriam the Prophet, “This stupid statue is an idol.” Miriam stepped forward and punched the calf right on its nose. The calf split in half.

The promise of God lasts much longer than any statue of gold or silver. Their children’s children would read about this calf for more than 120 generations. Long after Isis, Hathor and all the other Gods of Egypt were forgotten, Jews, Christians and Muslims all around the world would read about Moses and the golden calf (Qur'an 38:17).

They would all learn the lesson that faithfulness requires Sabr; both trust and patience, because God will never abandon those who are faithful to Him (Qur'an  2:214 &14:5).