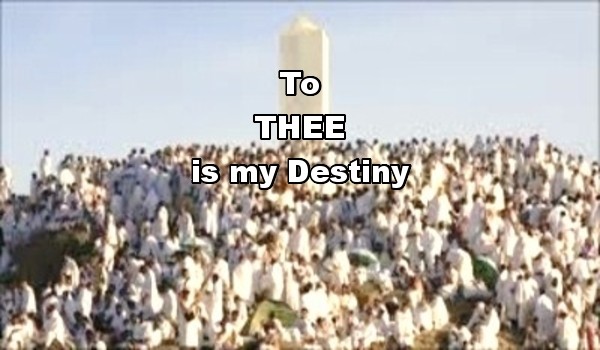 The Kabah is the first house built on earth for the worship of the One and Only God of the universe.

Much has been written about hajj – about its significance, its benefits and its uniqueness. As a person who is about to undertake this momentous journey in answer to the call of our patriarch Abraham, I try to visualize the kind of experience it is going to be.

Hajj is an intensive training for absolute and unconditional surrender to God. Many non-Muslims misunderstand that hajj derives its importance from Makkah as the birth place of Prophet Muhammad.

In fact, all the rituals of hajj are related to the life and example of Prophet Abraham, his wife Hajar and his son Ismail. But the real significance of the Kabah is that it was the first house built on earth for the worship of the One and Only God of the universe.

Generally, pilgrimages in religions derive their importance from their connection to the birth, death, or burial of a prophet or saint. But hajj differs from this significantly.

It is true that the places of hajj awaken in the minds of the pilgrims the memory of the family of Prophet Abraham and to some extent of Prophet Muhammad, but all the rites of hajj are directed to God and are meant for seeking His Mercy and Forgiveness.

Secondly the rites of hajj — such as the circumambulation of the House, running between the two mountains (Safa and Marwa), and animal sacrifice — are all linked to the family of Abraham the Patriarch revered by Jews, Christians and Muslims alike.

In hajj, we try to emulate that great prophet and his family by re-enacting some of their acts of love, obedience and sacrifice. We walk the same routes they traversed following their very footsteps, struggling hard to experience the same devotion and dedication to God.

From the moment we decide to perform the hajj, it is our duty to evaluate our lifestyle by the standard of Prophet Abraham's family.

Indeed, the circumambulation or going around the Kabah has great mystic significance. It connects the pilgrims to the cosmic system, where planets and galaxies revolve along their specified orbits in obedience to the Law of the Creator.

The spiritual pull of the Kabah is derived from its Lord and Owner, and the pilgrimage to it exemplifies to some extent the mystique of the place to draw masses of people towards it.

Its magnetism, as it were, generates a sentimental yearning for the place in the hearts of the people who eventually merge into the never-ending circles of humanity slowly revolving around the House of God.

Evidently, there is no other pilgrimage that unites in one place so many humans of so many different colors, races, tribes, nationalities and languages to participate in the same rites for the worship of the Only God.

Hajj is one of the pillars that Islam is built on. Indeed it is the fifth pillar, which we may say is the culmination of the other four "pillars".

Here between the earth and sky, there is no veil to hide them, nothing at all to make them feel that they are away from their Creator.

Of course God does not dwell in this desert nor in the Kabah; but standing in the midst of a sea of humanity eagerly "desiring the Face of God", pilgrims feel completely transformed by the experience of Divine Presence.

Arafah is a marvelous location where they feel how petty all the pretensions of worldly power and pomp are, and how wicked and stupid people are when they fight over man-made borders and claims of distinction.

Indeed, our lust for wealth, power, status and domination will appear utterly meaningless and stupidly misdirected when we stand ‘facing’ God.
One needs to undertake such a truly spiritual journey as hajj to realize this, because hajj is a pilgrimage of the soul that subordinates all the mundane differences of race, nationality and class.

Today humanity has arrived at a critical juncture; and we are acutely aware of the modern dilemma of making a choice between two ideological positions. One is that of upholding the lofty principles taught by the prophets of God; and the other is chasing the illusions offered by the proponents of materialistic ideologies.

The former will lead us to a future of peace and happiness; while the latter will drive us to self-destruction.

The message of the hajj is one world and one humanity under the One and Only God; and our present predicaments make us realize the overarching importance of directing all our attention and effort towards achieving that end.