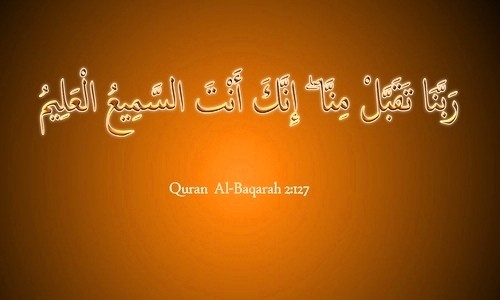 "Our Lord! Accept (this service) from us:
For Thou art the All- Hearing, the All-knowing."
[2:127 - Yusuf Ali]
Narrated Ibn `Abbas:
When Abraham had differences with his wife), (because of her jealousy of Hajar, Ishmael's mother), he took Ishmael and his mother and went away. They had a water-skin with them containing some water, Ishmael's mother used to drink water from the water-skin so that her milk would increase for her child. When Abraham reached Mecca, he made her sit under a tree and afterwards returned home. Ishmael's mother followed him, and when they reached Kada', she called him from behind, 'O Abraham! To whom are you leaving us?' He replied, '(I am leaving you) to Allah's (Care).' She said, 'I am satisfied to be with Allah.' She returned to her place and started drinking water from the water-skin, and her milk increased for her child. When the water had all been used up, she said to herself, 'I'd better go and look so that I may see somebody.' She ascended the Safa mountain and looked, hoping to see somebody, but in vain. When she came down to the valley, she ran till she reached the Marwa mountain. She ran to and fro (between the two mountains) many times. They she said to herself, 'i'd better go and see the state of the child,' she went and found it in a state of one on the point of dying. She could not endure to watch it dying and said (to herself), 'If I go and look, I may find somebody.' She went and ascended the Safa mountain and looked for a long while but could not find anybody. Thus she completed seven rounds (of running) between Safa and Marwa. Again she said (to herself), 'I'd better go back and see the state of the child.' But suddenly she heard a voice, and she said to that strange voice, 'Help us if you can offer any help.' Lo! It was Gabriel (who had made the voice). Gabriel hit the earth with his heel like this (Ibn `Abbas hit the earth with his heel to Illustrate it), and so the water gushed out. Ishmael's mother was astonished and started digging. (Abu Al-Qasim) (i.e. the Prophet) said, "If she had left the water, (flow naturally without her intervention), it would have been flowing on the surface of the earth.") Ishmael's mother started drinking from the water and her milk increased for her child . Afterwards some people of the tribe of Jurhum, while passing through the bottom of the valley, saw some birds, and that astonished them, and they said, 'Birds can only be found at a place where there is water.' They sent a messenger who searched the place and found the water, and returned to inform them about it. Then they all went to her and said, 'O ishmael's mother! Will you allow us to be with you (or dwell with you)?' (And thus they stayed there.) Later on her boy reached the age of puberty and married a lady from them. Then an idea occurred to Abraham which he disclosed to his wife (Sarah), 'I want to call on my dependents I left (at Mecca).' When he went there, he greeted (Ishmael's wife) and said, 'Where is Ishmael?' She replied, 'He has gone out hunting.' Abraham said (to her), 'When he comes, tell him to change the threshold of his gate.' When he came, she told him the same whereupon Ishmael said to her, 'You are the threshold, so go to your family (i.e. you are divorced).' Again Abraham thought of visiting his dependents whom he had left (at Mecca), and he told his wife (Sarah) of his intentions. Abraham came to Ishmael's house and asked. "Where is Ishmael?" Ishmael's wife replied, "He has gone out hunting," and added, "Will you stay (for some time) and have something to eat and drink?' Abraham asked, 'What is your food and what is your drink?' She replied, 'Our food is meat and our drink is water.' He said, 'O Allah! Bless their meals and their drink." Abu Al-Qa-sim (i.e. Prophet) said, "Because of Abraham's invocation there are blessings (in Mecca)." Once more Abraham thought of visiting his family he had left (at Mecca), so he told his wife (Sarah) of his decision. He went and found Ishmael behind the Zamzam well, mending his arrows. He said, "O Ishmael, Your Lord has ordered me to build a house for Him." Ishmael said, "Obey (the order of) your Lord." Abraham said, "Allah has also ordered me that you should help me therein." Ishmael said, "Then I will do." So, both of them rose and Abraham started building (the Ka`ba) while Ishmael went on handing him the stones, and both of them were saying, "O our Lord ! Accept (this service) from us, Verily, You are the All-Hearing, the All-Knowing." (2.127). When the building became high and the old man (i.e. Abraham) could no longer lift the stones (to such a high position), he stood over the stone of Al- Maqam and Ishmael carried on handing him the stones, and both of them were saying, 'O our Lord! Accept (this service) from us, Verily You are All-Hearing, All-Knowing." (2.127)  ﻿[Bukhari, Book #60, Hadith #44]﻿