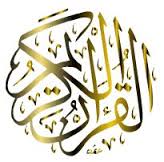 “And indeed this Quran has been revealed by the Lord of all the worlds.”

In Obedience To Merciful ALLAH'S Guidance for Mankind:

ALLAH, The Exalted, Sent The Quran, so that mankind could come out of Darkness (Jahiliyyah) into The Light (understand, embrace and practice, Moral and Intellectual Excellence).

[Quran – 14:1 – Daryabadi] “Alif. Lam. Ra. This is a Book which We have sent down unto thee, that thou mayest bring the mankind forth from the darknesses unto the light, by the command of their Lord: unto the path of the Mighty, the Praiseworthy.”

And he, for whom ALLAH, The Exalted has not appointed a Light, will remain in Darkness, forever.

ALLAH, The Exalted, Bestowed The Quran, The CRITERION, so that mankind could distinguish between Right and Wrong.

[Quran – 25:1 – Farook Malik] “Blessed is the One Who has revealed Al-Furqan (the criterion to distinguish right from wrong: The Quran) to His servant, that he may be a Warner to the worlds;”

Merciful ALLAH, Has Informed the mankind the reasons for The Revelation of The Quran:

[Quran - 2:213 – Yusuf Ali] “Mankind was one single nation, and Allah sent Messengers with glad tidings and warnings; and with them He sent the Book in truth;”

[Quran – 2:151 – Farook Malik] “just as We bestowed Our favor upon you when We sent among you a Messenger of your own who recites to you Our revelations, sanctifies you, teaches you the Book and wisdom, and teaches you that which you did not know.”

Merciful ALLAH, cleared all doubts, for the benefit of mankind by declaration:

[Quran – 2:285 – Laleh Bakhtiar] “The Messenger believed in what was caused to descend to him from his Lord as do the ones who believe. All believed in God and His angels and His Books and His Messengers saying: We separate and divide not among anyone of His Messengers. And they said: We heard and we obeyed, so grant Thy forgiveness, Our Lord! And to Thee is the Homecoming.”

For the mankind, ALLAH, The Exalted Has Established The Criterion of Differentiation between BELIEVERS and UNBELIEVERS, Thus:

Those who, Understand, Embrace and Declare;

I bear witness; there is no god but ALLAH; Muhammad is the Messenger of ALLAH;

Are indeed The True Believers.