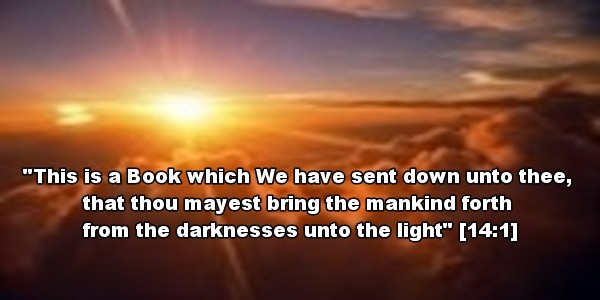 HOPE AND TRUST IN GOD IN QUR'AN AND JUDAISM

A person who believes in God cannot become a pessimist, sinking into negativism, cynicism, depression or despair. God always provides for us believers, the potential for improvement and redemption, through our own repentance, or through faith and hope in God's mercy. This is true even if it seems that our challenges and hardships come from God. The Qur'an provides us with a wonderful example of the near fatal impact of depression, despair and dejection on people, and the importance of hope and trust in God's mercy for revitalizing those, who having become disheartened and dejected, have given up on life. “ Consider those who fled their homes by the thousands for fear of death. God said to them; 'you shall perish' and then He brought them back to life.'” (Qur'an 2:243)) In the year 587 B.C.E. The Children of Israel were defeated by the Babylonians. The city of Jerusalem was totally destroyed and many of the inhabitants of the land of Israel were exiled to Babylonia. All this as Prophet Jeremiah had warned the Jewish people; and as Prophet Muhammad cited 12 centuries later, “When the first of the warnings came to pass, We sent against you Our servants (Babylonia) given to terrible warfare: They entered the very inmost parts of your homes (Jerusalem and its Holy Temple); it was a warning (completely) fulfilled. (Qur'an 15:5)

In Babylonia the defeated Jewish community felt discouraged and depressed. All of them were dispirited by the image of the utter ruins of the city of Jerusalem, and many of them even felt abandoned by God because their hope was gone. As the Qur'an relates (2:259) “ A man who passed by a town that had fallen into utter ruin questions himself, 'How will God restore life to this town that is now dead?' This is exactly how many of the Children of Israel felt and thought after the Babylonians destroyed the city of Jerusalem. In the Qur'an the man himself experiences a miracle to show him God's power and make him a sign to others of God's power to revitalize and resurrect the dead both physically and spiritually. The Ayah then states, “Look at the bones, how We set them together, and then clothed them with flesh”. This is a reference to the words of Prophet Ezekiel-Hizqil who God inspired to encourage the Children of Israel living in exile in Babylonia to trust that God would resurrect their national life in the near future just as God would resurrect their individual lives in the far future at the end of days.

Two generations later the Persians destroyed the Babylonian Empire and permitted the Jews to return to the Land of Israel and begin the rebuilding the city of Jerusalem. As the Qur'an (15:6) says, “Then did We grant you the Return as against them: We gave you increase in resources and sons, and made you the more numerous in man-power.” Unfortunately, after several centuries some of the Children of Israel again strayed from the path of the Torah. In an atempt to be extra pious they expanded the rules concerning prohibited food far beyond the words of the Torah. The prohibition “You shall not boil a baby goat in its mother's milk” (Exodud 23:19), a law similar to other rules that forbid acts of insensitivity against animals, such as slaughtering cattle on the same day as their young (Leviticus 22:28), was expanded to include eating ant meat with any dairy product. This major expansion of food prohibitions not only made it hard for Jews to observe Judaism, it also served as an obstical discouraging pagan polytheists from joining the Jewish community and thus become believers in monotheism. As the Qur'an states (6:146), “For those who followed Jewish Law, We forbade every (animal) with undivided hoof, and We forbade them the fat of oxen and sheep, except what adheres to their backs or their entrails, or is mixed up with a bone”. Any major expansion of these restrictions is an error. As the Qur'an states (3:93) “ All food was lawful to the Children of Israel, except what Israel made unlawful for itself before the Torah was revealed. Say (to them) 'Bring the Torah and study it, if ye be men of truth.'" So Jerusalem and its temple were destroyed a second time, and the Children of Israel were exiled throughout the Roman Empire. As the Qur'an (15:7) says, “If you did well, you did well for yourselves; if you did evil, (you did it) against yourselves. So when the second of the warnings came to pass, (We permitted your enemies) to disfigure your faces, and to enter your Temple as they had entered it before, and to visit with destruction all that fell into their power.” (Yusuf Ali trans.)

However, the Children of Israel had learned well the lesson of Prophet Ezekiel and the dry bones. This time they did not despair during the centuries of exile. They hoped and prayed for a second return to their homeland. As the Qur'an (15:8) says, “It may be that your Lord may (yet) show Mercy unto you; but if you revert (to your sins), We shall revert (to Our punishments). We have made Hell a prison for those who reject (all Faith). Thus we see that hope and trust in God, as well as repentance and self-improvement, enable both individuals and nations to be revitalized and resurrected in this world and in the world to come.