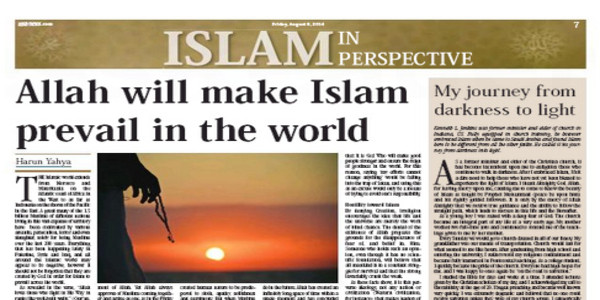 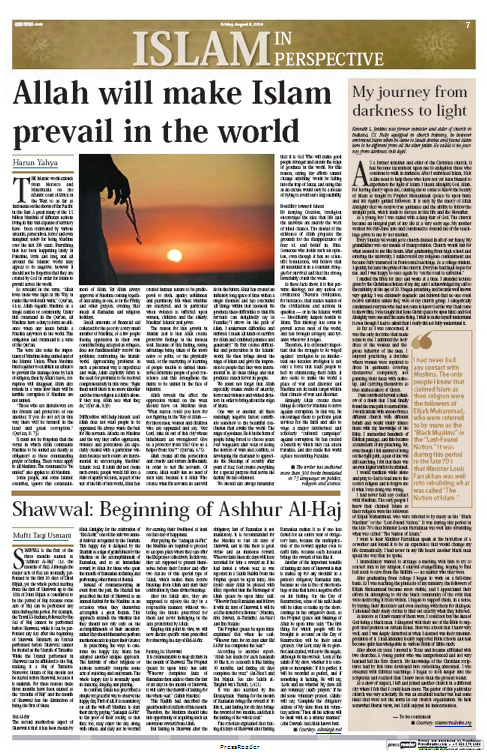 The Islamic world extends from Morocco and Mauritania on the Atlantic coast of Africa in the West to as far as Indonesia on the shores of the Pacific in the East. A great many of the 1.5 billion Muslims of different nations living in this vast expanse of territory have been confronted by various assaults, persecution, terror and even slaughter, solely for being Muslims over the last 200 years. Everything that has been happening lately in Palestine, Syria and Iraq, and all around the Islamic world may appear to be negative; however it should not be forgotten that they are created by God in order for Islam to prevail across the world.

As revealed in the verse, “Allah loves those who fight in His Way in ranks like well-built walls,” (Qur’an, 61:4), Allah regards Muslims as a single nation or community. Under this command in the Qur’an, all Muslims have a duty to form an alliance when any harm befalls a Muslim anywhere in the world. This obligation and command is a verse of the Qur’an.

The verse also notes the importance of Muslims being united and of the Islamic Union. When Muslims bind together to establish an alliance to prevent the damage done by lack of religion, then by Allah’s leave, corruption will disappear. Allah also reveals in a verse how there will be terrible corruption if Muslims are not united:

“Those who are disbelievers are the friends and protectors of one another. If you do not act in this way there will be turmoil in the land and great corruption.” (Qur’an, 8: 73)

It must not be forgotten that the verses in which Allah commands Muslims to be united are clearly as obligatory as those commanding prayer or fasting. These verses apply to all Muslims. The command to “be united” also applies to all Muslims.

Some people, and some Islamic countries, ignore this commandment of Allah. Yet Allah always approves of Muslims coming together and acting as one, as in the Friday and other prayers, evening iftar meals at Ramadan and religious holidays.

Small amounts of financial aid collected for the poor by a very small number of Muslims, or a few people fleeing oppression in their own countries being accepted as refugees, does not fundamentally resolve the problems confronting the Islamic world. Approaching problems in such a piecemeal way is superficial and weak; Allah explicitly refers to the need for problems to be resolved comprehensively in this verse: “Fight them until there is no more disorder and the true religion is Allah’s alone. If they stop, Allah sees what they do,”(Qur’an, 8:39)

Allah does not want people to be oppressed. He always wants the best for His servants. Attacks on Muslims and the way they suffer oppression, violence and persecution are especially created with a particular wisdom because such events are instrumental in encouraging Muslims’ Islamic zeal. If Allah did not create such events, people would fall into a state of apathy because, as part of the test of the life of this world, Allah has created human nature to be predisposed to sloth, apathy, selfishness and parsimony. But when Muslims are martyred, and in particular when violence is inflicted upon women, children and the elderly, Muslims’ Islamic zeal grows.

The reason for this growth in Islamic zeal is that Allah creates protective feelings in the human soul. Because of this feeling, seeing advantage being taken of the more naive or polite, or the physically weak, or the martyring or harming of people unable to defend themselves infuriates people of good conscience and this strengthens the desire to be united in the face of injustice.

Allah reveals the effect the oppression visited on the weak should have on Muslims thus: “What reason could you have for not fighting in the Way of Allah — for those men, women and children who are oppressed and say, ‘Our Lord, take us out of this city whose inhabitants are wrongdoers! Give us a protector from You! Give us a helper from You’?” (Qur’an, 4:75)

Allah creates all this persecution and cruelty and torture deliberately, in order to test His servants. Of course, Allah really has no need of such tests, because it is Allah Who creates what His servants do and will do in the future. Allah has created an infinitely long space of time within a single moment and has concluded all things within that moment. He produces these difficulties so that His servants can delightedly say in Paradise;”I strove on the path of Allah. I underwent difficulties and suffered. I made all kinds of sacrifice for Allah and exhibited patience and generosity.” He first creates difficulties and persecution in the Islamic world; He then brings about the reign of Islam and gives the impression to people that they were instrumental in all these things and that produces much fervor in people.

We must not forget that Allah especially creates events of anarchy, terror and violence and wicked dictators in order to bring about the reign of Islam.

One way or another, all these seemingly negative factors contribute somehow to the beautiful conclusion that awaits the world: The reign of goodness. Be it in the form of people being forced to choose peace over vengeance after years of seeing the horrors of wars and conflicts, or developing the character to appreciate the blessings of security after years of fear, God creates everything for a special purpose that serves the destiny He has ordained.

We should also always remember that It is God Who will make good people stronger and ensure the reign of goodness in the world. For this reason, saying ‘my efforts cannot change anything’ would be falling into the trap of Satan, and using this as an excuse would only be a means of trying to avoid one’s responsibility.

By denying Creation, irreligion encourages the idea that life and the universe are merely the work of blind chance. The denial of the existence of Allah prepares the grounds for the disappearance of fear of, and belief in, Him. Someone who holds such an opinion, even though it has no scientific foundation, will believe that all mankind is in a constant struggle for survival and that the strong invariably crush the weak.

As these facts show, it is this perverse ideology, not any nation or civilization (Western civilization, for instance), that makes leaders of the civilizations and nations in question — or in the Islamic world — bloodthirsty despots hostile to Islam. This ideology has come to prevail across most of the world, and has brought savagery and tyranny wherever it reigns.

Therefore, it is extremely important that the struggle to be waged against irreligion be an intellectual one because irreligion is not only a force that leads people to hell by eliminating their faith; it also seeks to make the world a place of war and disorder and Muslims are its main target within that climate of war and disorder.

Almighty Allah creates these things in order for Muslims to strive against corruption. In this way, He encourages them to perform great services for the faith and also to wage a major intellectual and scholarly “cultural campaign” against corruption. He has created a benefit by which they can attain Paradise, and also make this world a place resembling Paradise.