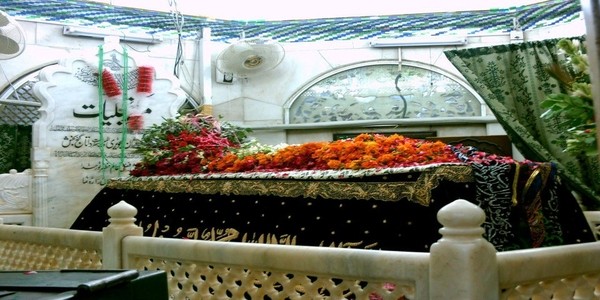 [17:23] "Your Lord has ordained that you must not worship anything other than Him" [Sarwar]

[7:194] "Surely those whom you call on besides Allah are in a state of subjugation like yourselves; therefore call on them, then let them answer you if you are truthful." [Shakir]

[27:62] "Who responds to the oppressed when he calls out to Him, and relieves his suffering and who will make you inheritors of the earth? Then, is there a god besides God? How little you pay heed!" [Wahiduddin]

[46:5] "Who is farther strayed from the Right Path than he who calls upon others than Allah that cannot answer his call till the Day of Resurrection, the while they are not even conscious that callers are calling upon them?" [Maududi]

[10:107] "And in case Allah touches you with adversity, then none (can) lift it off except He; and in case He wills any charity for you, then none (can) turn back His Grace; He causes it to alight on whomever He decides of His bondmen; and He is The Ever-Forgiving, The Ever-Merciful." [Ghali]

[5:72] "Indeed, he who associates others with Allah - Allah has forbidden him Paradise, and his refuge is the Fire. And there are not for the wrongdoers any helpers." [Umm Muhammad]

[1]. Yahya related to me from Malik from Zayd ibn Aslam from Ata ibn Yasar that the Messenger of Allah, may Allah bless him and grant him peace, said, "O Allah! Do not make my grave an idol that is worshipped. The anger on those who took the graves of their Prophets as places of prostration was terrible." [Malik's Muwatta, Book 9, Hadith 88]

[2]. Jundub reported:
I heard from the Apostle of Allah (pbuh) five days before his death and he said: I stand acquitted before Allah that I took any one of you as friend, for Allah has taken me as His friend, as he took Ibrahim as His friend. Had I taken any one of my Ummah as a friend, I would have taken Abu Bakr as a friend. Beware of those who preceded you and used to take the graves of their prophets and righteous men as places of worship, but you must not take graves as mosques; I forbid you to do that. [Muslim, Book 5, Hadith 28]

[3]. Narrated `Urwa bin Az-Zubair:
`Aisha said, "The Prophet (pbuh) said during his fatal illness, "Allah cursed the Jews for they took the graves of their prophets as places for worship." `Aisha added, "Had it not been for that (statement of the Prophet ) his grave would have been made conspicuous. But he was afraid that it might be taken as a place for worship." [Bukhari, Book 64, Hadith 462]

[4]. Narrated Abu Huraira:
Allah's Messenger (pbuh) said, "May Allah's curse be on the Jews for they built the places of worship at the graves of their Prophets." [Bukhari, Book 8, Hadith 86]

[5]. Narrated `Aisha:
Um Habiba and Um Salama mentioned about a church they had seen in Ethiopia in which there were pictures. They told the Prophet (pbuh) about it, on which he said, "If any religious man dies amongst those people they would build a place of worship at his grave and make these pictures in it. They will be the worst creature in the sight of Allah on the Day of Resurrection."
[Bukhari, Book 8, Hadith 77]

[6]. Abu Marthan Al-Ghanawi narrated that:
The Prophet said: "Do not sit on the graves nor perform Salat towards them." (Sahih)
[Tirmidhi, Book 10, Hadith 86]

[7]. Jabir said:
"The Messenger of Allah forbade plastering over graves, building over them or sitting on them." (Sahih) [Nasa'i, Book 21, Hadith 212]

[10]. Abu Marthad al-Ghanawi reported Allah's Messenger (pbuh) as saying:
Do not pray facing towards the graves, and do not sit on them. [Muslim, Book 11, Hadith 127]