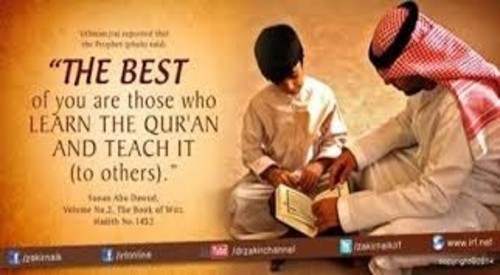 FAITHFUL SERVANTS OF ALLAH LEARN AND TEACH THE BOOK

[Bukhari, Book #92, Hadith #419] “Narrated 'Abdullah: Allah's Apostle said, "Do not wish to be like anybody except in two cases: The case of a man whom Allah has given wealth and he spends it in the right way, and that of a man whom Allah has given religious wisdom (i.e., Qur'an and Sunna) and he gives his verdicts according to it and teaches it." (to others i.e., religious knowledge of Qur'an and Sunna (Prophet's Traditions)."

[Bukhari, Book #3, Hadith #79] “Narrated Abu Musa: The Prophet said, "The example of guidance and knowledge with which Allah has sent me is like abundant rain falling on the earth, some of which was fertile soil that absorbed rain water and brought forth vegetation and grass in abundance. (And) another portion of it was hard and held the rain water and Allah benefited the people with it and they utilized it for drinking, making their animals drink from it and for irrigation of the land. (And) a portion of it was barren which could neither hold the water nor bring forth vegetation (then that land gave no benefits). The first is the example of the person who comprehends Allah's religion and gets benefit (from the knowledge) which Allah has revealed through me (the Prophets and learns and then teaches others. The last example is that of a person who does not care for it and does not take Allah's guidance revealed through me (He is like that barren land.)"

[Muslim, Book #035, Hadith #6518] “Abu Huraira reported Allah's Messenger (may peace be upon him) as saying: He who alleviates the suffering of a brother out of the sufferings of the world, Allah would alleviate his suffering from the sufferings of the Day of Resurrection, and he who finds relief for one who is hard pressed, Allah would make things easy for him in the Hereafter, and he who conceals (the faults) of a Muslim, Allah would conceal his faults in the world and in the Hereafter. Allah is at the back of a servant so long as the servant is at the back of his brother, and he who treads the path in search of knowledge, Allah would make that path easy, leading to Paradise for him and those persons who assemble in the house among the houses of Allah (mosques) and recite the Book of Allah and they learn and teach the Qur'an (among themselves) there would descend upon them the tranquillity and mercy would cover them and the angels would surround them and Allah makes a mention of them in the presence of those near Him, and he who is slow-paced in doing good deeds, his (high) descent does not make him go ahead.

[Malik’s Muwatta, Book #9, Hadith #9.18.56] “Yahya related to me from Malik from Sumayy, the mawla of Abu Bakr, that Abu Bakr ibn Abd ar-Rahman used to say, "Someone who goes to the mosque in the morning or the afternoon with no intention of going anywhere else, either to learn good or teach it, is like someone who does jihad in the way of Allah and returns with booty."