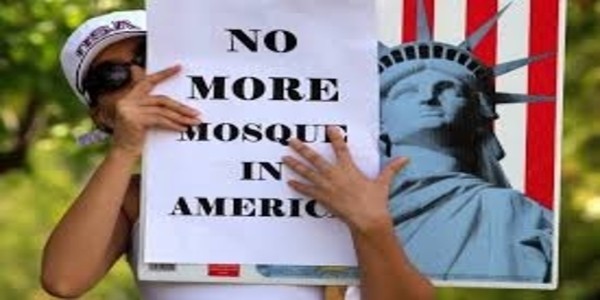 A majority of Americans (56 percent, including even larger majorities in all the major Christian denominations) say the values of Islam are at odds with American values according to the Public Religion Research Institute’s annual American Values Survey (of 2,695 U.S. adults), released November 17, 2015.

That’s a significant rise of nine points in just the four years since 2011, when Americans were evenly split, with 47 percent saying Islamic values were incompatible while 48 percent disagreed.

A slow economic recovery, legalizing gay marriage, and ongoing terrorism in, and coming from, the Middle East, make millions of American’s fearful for America’s future.

Widespread doubt about America’s future has split Americans in half  — 49 percent to 49 percent — on whether “America’s best days are ahead of us or behind us.” This anxiety had  produced a scapegoat; the religion of Islam, as can been seen in a major rise in Islamophobia in the U. S.

Three large groups of Americans had a major increase in Islamophobia; and three smaller groups only had a small rise, or no raise at all.

The three groups that did not show a significant rise in Islamophobia are all American minorities: only 55 percent of black Protestants said Islamic values were incompatible with American values (up only 4 points from 51 percent) ;
and among Jews and  “nones,” people who claim no religious label, there was no rise at all, because statistically speaking a one point difference (to 42 percent from 41 percent) is within the surveys margin of error.

Since Jews are non-Christians, and 95 percent of “nones” are ex-Christians; both groups are usually closer to each other in most surveys than either is to Christian public values.

Many people are very surprised to learn that Jews are much less Islamophobic than Christians even after eight decades of conflict between Palestinians and Israelis.

Most Rabbis would explain the low rate of Islamophobia among Jews by pointing out that Judaism is more compatible with Islam because both religions reject the concept of Jesus as the Son of God, and the doctrine of original sin. Most of the non-Jews who convert to Judaism [about 3-5,000 a year] do so because they reject the doctrine of original sin and while they do believe in God, they cannot believe that God has a son.

For this the Jewish People suffered for centuries in Europe from religious extremism and intolerance, so Jews tend to be suspicious of all religious bigotry and scapegoating. This may be the best explanation of  the Jewish disavowal of Islamophobia in America.

Also, all rabbis know that during the ten plus centuries of the Medieval Age, Jews were persecuted much less in Muslin countries than they were in Christian countries. Even today, Muslim extremist terrorists have slaughtered many more Muslim victims, than the number of Christian and Jewish victims combined.

In 2014 according to the Global Terrorism Index the Islamic State slaughtered 6,073 people, the great majority of them Muslims; and Boko Haram murdered even more victims—6,644.

Everyone should be constantly reminded that religious extremism is ultimately self-destructive to its self, and its supporters. In the words of the poet W. B. Yeats: “Things fall apart; the center cannot hold…The best lack all conviction, while the worst are full of passionate intensity.”