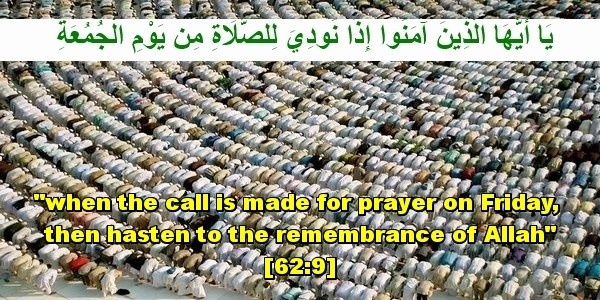 “O you who believe (Muslims)! When the call is proclaimed for the Salat (prayer) on Friday (Jumu’ah prayer), come to the remembrance of Allah [Jumu'ah religious talk (Khutbah) and Salat (prayer)] and leave off business (and every other thing). That is better for you if you did but know!” Quran (Surah Jumuah:9)
​
JUMUA'AH IN ISLAM – Explained By Iqrasense

The Blessings of “Friday” in Islam

Ibn Kathir reported that Friday is called Al-Jumu`ah because it is derived from Al-Jam`, literally, ‘gathering’. The people of Islam gather weekly, on every Friday in the major places of worship. It was during Friday when Allah finished the creation, the sixth day, during which Allah created the heavens and earth. During Friday, Allah created Adam, and he was placed in Paradise, and ironically, it was a Friday when he was taken out of Paradise. It will be on a Friday when the Last Hour will commence. There is an hour during Friday, wherein no faithful servant asks Allah for something good, but Allah will give him what he asked for. All of this is based upon Hadiths in the authenic collections (see below). In the ancient language Friday was called, `Arubah. It is a fact that previous nations were informed about Friday, but they were led astray from it. The Jews chose Saturday for their day of worship and the Christians chose Sunday, which is the day the creation was initiated. Allah chose Friday for this Ummah, because it is the day the creation was finished.

It has been authentically reported from the Prophet (s.a.w.s.) that he said:

“Allah diverted those who were before us from Friday; for the Jews (the day set aside for prayer) was Saturday, and for the Christians it was Sunday. And Allah turned towards us and guided us to Friday (as the day of prayer) for us. In fact, He (Allah) made Friday Saturday and Sunday (as days of prayer). In this order would they (Jews and Christians) come after us on the Day of Resurrection. We are the last among the people in this world and we will be the first among the created beings to be judged on the Day of Resurrection.” (Narrated by Muslim, An-Nasa’i and Ibn Majah.)

“The best day on which the sun has risen is Friday; on it, Adam was created and on it he was sent down (to earth), on it, his repentance was accepted (by Allah), on it, he died and on it, the Hour will be established. And every moving creature is listening on Friday, from the time awakes in the morning, until the sun rises, due to fear of the Hour, except the jinn and mankind, and on this day, there is a time when, if a Muslim slave prays to Allah and asks Him, He will give him what he asked for.” (Narrated (by Malik) in ‘Al-Muwatta” and also authenticated by At-Tirmidhi as stated in Zaad Al-Maad.)