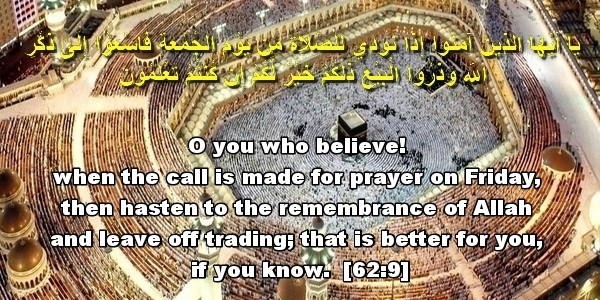 JUMU'AH EXPLAINED BY THE PROPHET (pbuh):

“O you who believe! When the call is made for prayer on Friday, then hasten to the remembrance of Allah and abandon trading; that is better for you, if you know.” [ALLAH’S Quran - 62:9 – Hamid S. Aziz]

1. [Sunan Abudawud, Book #3, Hadith #1051] Narrated Abdullah ibn Amr: The Prophet (peace_be_upon_him) said: The Friday prayer is obligatory on him who hears the call.

2. [Sunan Abudawud, Book#3, Hadith #1062] Narrated Tariq ibn Shihab: The Prophet (peace_be_upon_him) said: The Friday prayer in congregation is a necessary duty for every Muslim, with four exceptions; a slave, a woman, a boy, and a sick person.

3. [Sunan Abudawud, Book #1, Hadith #0342] Narrated Hafsah, Ummul Mu'minin: The Prophet (peace_be_upon_him) said: It is necessary for every adult (person) to go for (saying) Friday (prayer), and for everyone who goes for Friday (prayer) washing is necessary.

5. [Bukhari, Book #13, Hadith #51] Narrated Abu Huraira: The Prophet said, "When it is a Friday, the angels stand at the gate of the mosque and keep on writing the names of the persons coming to the mosque in succession according to their arrivals. The example of the one who enters the mosque in the earliest hour is that of one offering a camel (in sacrifice). The one coming next is like one offering a cow and then a ram and then a chicken and then an egg respectively. When the Imam comes out (for Jumua prayer) they (i.e. angels) fold their papers and listen to the Khutba."

6. [Bukhari, Book #13, Hadith #7] Narrated Abu Huraira: While 'Umar (bin Al-Khattab) was delivering the Khutba on a Friday, a man entered (the mosque). 'Umar asked him, "What has detained you from the prayer?" The man said, "It was only that when I heard the Adhan I performed ablution (for the prayer)." On that 'Umar said, "Did you not hear the Prophet saying: 'Anyone of you going out for the Jumua prayer should take a bath'?"
.
7. [Muslim, Book #004, Hadith #1837] Abu Huraira reported: Umar b. Khattab was delivering a sermon to the people on Friday when 'Uthman b. 'Affan came there. 'Umar hinting to him said: What would become of those persons who come after the call toprayer? Upon this 'Uthman said: Commander of the faithful, I did no more than this that after listening to the call, I performed ablution and came (to the mosque). 'Umar said: Just ablution! Did you not bear the Messenger of Allah (my peace be upon him) say this: When any one of you comes for Jumu'a, he should take a bath.

8. [Muslim, Book #004, Hadith #1862] It is narrated by Abu Huraira and Huraira that the Messenger of Allah (may peace be upon him) said: It was Friday from which Allah diverted those who were before us. For the Jews (the day set aside for prayer) was Sabt (Saturday), and for the Christians it was Sunday. And Allah turned towards us and guided us toFriday (as the day of prayer) for us. In fact, He (Allah) made Friday, Saturday and Sunday (as days ofprayer). In this order would they (Jews and Christians) come after us on the Day of Resurrection. We are the last of (the Ummahs) among the people in this world and the first among the created to be judged on the Day of Resurrection. In one narration it is: ', to be judged among them".

9. [Muslim, Book #004, Hadith #1882] Abdullah b. Umar and Abu Huraira said that they heard Allah's Messenger (way peace be upon him) say on the planks of his pulpit: People must cease to neglect the Friday prayer or Allah will seal their hearts and then they will be among the negligent.