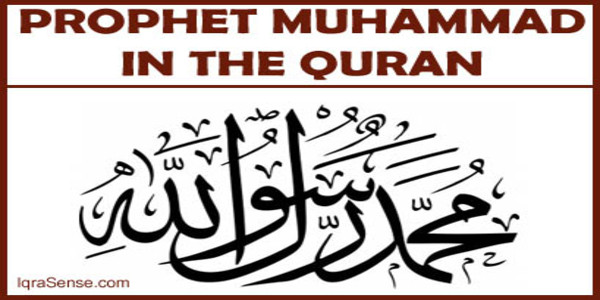 MUHAMMAD (pbuh): In The Quran

Prophet Muhammad (S) was the last messenger of Allah. History shows that he was known to be truthful and trustworthy even before he received the divine inspiration and became the Messenger of Allah. His actions, decisions, relaying the Divine Revelation, method of inviting people to the straight path and implementing injunctions received from Allah, the Most Wise, are evidence of his absolute honesty, piety and spirituality.

As Muslims, our belief in Islam is not complete until we obey Allah and His Prophet (s). Allah commands us to do so in the same verse in the Quran:

Allah also told us about the excellence of the prophet’s (s) character in the following verse:

“And Verily. for you (Muhammad (S)) are on an exalted (standard of) character” (Quran, Surah Al-Qalam:4).

“Do not exaggerate about me as was exaggerated about ‘Eesa ibn Maryam. Say: the slave of Allah and His Messenger.” (Narrated by al-Bukhaari, 6830.)

The following paragraphs highlight some of the Quranic verses where Allah clarifies the role of the prophet (s).

The Prophet was sent as a mercy to all mankind

We have only sent you as a mercy to the worlds (Surah Al-Anbiya, Verse 107)

The Prophet was sent as a messenger and a warner

“O people of the Scripture (Jews and Christians)! Now has come to you Our Messenger (Muhammad SAW) making (things) clear unto you, after a break in (the series of) Messengers, lest you say: “There came unto us no bringer of glad tidings and no warner.” But now has come unto you a bringer of glad tidings and a warner. And Allah is Able to do all things. (Quran, Surah Al-Maida:19)”

“(He Alone) the All-Knower of the Ghaib (unseen), and He reveals to none His Ghaib (unseen).”
Except to a Messenger (from mankind) whom He has chosen (He informs him of unseen as much as He likes), and then He makes a band of watching guards (angels) to march before him and behind him. Quran (Surah Al-Jinn:27)”
The Prophet (s) did not have the power to guide anyone – He was only a messenger

“Indeed, (O Muhammad), you do not guide whom you like, but Allah guides whom He wills. (Quran, Surah Qasas, Verse 56)”

The prophet’s words were a reminder for all mankind

And verily, those who disbelieve would almost make you slip with their eyes through hatred when they hear the Reminder (the Quran), and they say: “Verily, he (Muhammad SAW) is a madman!”

But it is nothing else than a Reminder to all the Alameen (mankind, jinns and all that exists). (Quran, Surah Al-Qalam:51-52)”

The Prophet (s) never forged any of Allah’s messages

And if he (Muhammad SAW) had forged a false saying concerning Us (Allah),
We surely should have seized him by his right hand (or with power and might),
And then certainly should have cut off his life artery (Aorta),
And none of you could withhold Us from (punishing) him. (Quran, Surah Al-Haqqah:44-47)
Allah also states that it is not up to the Prophet (s) to change Allah’s words in this verse.

“And when Our Clear Verses are recited unto them, those who hope not for their meeting with Us, say: Bring us a Quran other than this, or change it.”Say (O Muhammad SAW): “It is not for me to change it on my own accord; I only follow that which is revealed unto me. Verily, I fear if I were to disobey my Lord, the torment of the Great Day (i.e. the Day of Resurrection). (Quran, Surah Yunus:15).

This is made clear when Allah says in the Quran,

“Say (O Muhammad SAW): “I don’t tell you that with me are the treasures of Allah, nor (that) I know the unseen; nor I tell you that I am an angel. I but follow what is revealed to me by inspiration. Say: Are the blind and the one who sees equal? Will you not then take thought? (Quran, Surah Al An’aam, 50)”

The Prophet (s) had no power to pardon anyone

“Not for you (O Muhammad (S), but for Allah) is the decision; whether He turns in mercy to (pardons) them or punishes them…” (Quran, Surah Aal-e-Imran:128).

In fact, we see the Quran’s (Allah’s) stern message when reminding the prophet (s) of his responsibilities. Allah says in the Quran:

“O Messenger (Muhammad SAW)! Proclaim (the Message) which has been sent down to you from your Lord. And if you do not, then you have not conveyed His Message. Allah will protect you from mankind. Verily, Allah guides not the people who disbelieve” (Quran, Surah Al-Maeda:67).

Obedience of Allah, is what the Prophet exemplified. His (S) character epitomized Quranic teachings. His faith in Allah was pure and absolute. Through his manner of living and fulfilling the obligations of Islam he illustrated Quranic teachings. In all, this he was following the instructions received from his Maker, Allah the Supreme, Who says in the Quran:

“Muhammad (S) is not the father of any man among you, but he is the Messenger of Allah and the last (end) of the Prophets. And Allah is Ever All Aware of everything. (Quran, Surah Al-Ahzab:40)”