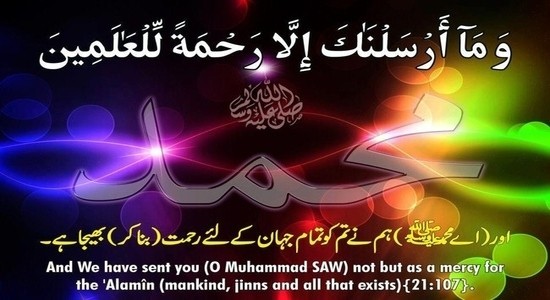 
What the Scholars have said:

Description by Ali, 4th, Rightly Guided Caliph of Islam:
“was neither tall nor lanky nor short and stocky, but of medium height. His hair was neither crispy curled nor straight but moderately wavy. He was not overweight and his face was not plump. He had a round face. His complexion was white tinged with redness. He had big black eyes with long lashes. His brows were heavy and his shoulders broad. He had soft skin, with fine hair covering the line from mid chest to navel. The palms of his hands and the soles of his feet were firmly padded. He walked with a firm gait, as if striding downhill. On his back between his shoulders lay the Seal of Prophethood [a mole], for he was the last of the prophets.
[Tosun Bayrak al-Jerrahi al-Halveti, The Name & the Named: The Divine Attributes of God, 2000]

PROPHET (pbuh) THE LIVING QUR’AN
“For the Muslim, the Prophet is the living Quran, that is, he practiced exactly whatever God revealed in the Quran.” “As the living Quran, the life, behaviour and sayings of the Prophet serve as a Model for all Muslims.” “As the Quran refers to the Prophet as a mercy to humanity and the model whose example should be followed, it is clear that he would have carried out any and all of the commands”
[LALEH BAKHTIAR – Introduction to THE SUBLIME QUR’AN – 2009]

THE FAITHFUL, THE SWEETEST, THE MOST AGREEABLE
“He was the most faithful protector of those he protected, the sweetest and most agreeable in conversation. Those who saw him were suddenly filled with reverence; those who came near him loved him; they who described him would say, "I have never seen his like either before or after." He was of great taciturnity, but when he spoke it was with emphasis and deliberation, and no one could forget what he said...”
[Speeches and Table Talk of the Prophet Mohammad, 1882. Author, Stanley Lane-Poole. Edition, reprint. Publisher, Kessinger Publishing, 2003.]

WORLD’S MOST INFLUENTIAL PERSON
"My choice of Muhammad to lead the list of the world's most influential persons may surprise some readers and may be questioned by others, but he was the only man in history who was supremely successful on both the religious and secular level." --
[Michael H. Hart, THE 100: A RANKING OF THE MOST INFLUENTIAL PERSONS IN HISTORY, New York: Hart Publishing Company, Inc., 1978, p. 33.]