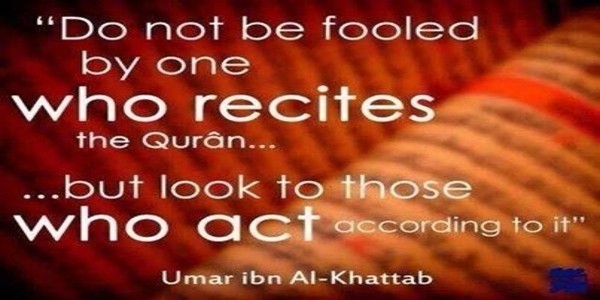 “Do not be fooled by the one who recites..”

The Prophet (pbuh) has said:
Malik said, "I heard that al-Qasim ibn Muhammad used to say, 'I have seen the people, (i.e. the companions), and they were not impressed by speech.' " Malik said, "He meant that only action and deedswould be looked at, not words."
[Malik's Muwatta, Book #56, Hadith #56.10.25)

‘Umar bin Al-Khattaab said:
“Do not be fooled by the one who recites the Qur’aan for that is only words that we utter. Rather, look at the one who acts upon it.”

Al-Hasan said:
“Verily, this Qur’aan is learned by servants and young children who do not approach it from its front side, nor do they have knowledge of the interpretation of its meanings. Allaah, the Most High, says: ‘This is a Book (which) We have sent down to you, full of blessings, that they may ponder over its verses.’ [Soorah Saad: 29] What does pondering over its verses mean? It means following it through actions. And verily, the people with the most right to this Qur’aan are those who follow it even if they don’t recite it. One of them says: ‘O so and so, come here, I will teach you how to recite! When did the reciters ever do this? They are not the reciters, nor are they the forbearing, nor the wise. May Allaah not increase their likes amongst the people!”