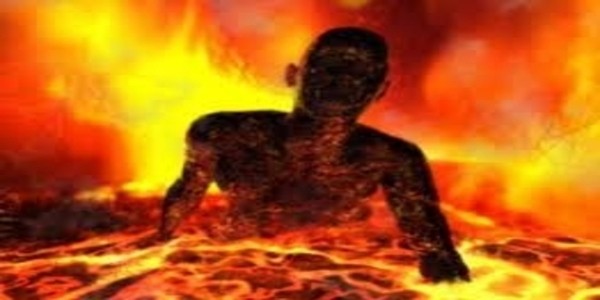 From their abode in Paradise, Righteous will ask the Sinners:
WHAT LED YOU INTO HELLFIRE? [74:41]

From their abode in The Fire, Sinners will say:

[2] It was narrated from Umm Habibah that:
The Messenger of Allah (pbuh) used to say: "Whoever prays four rak'ahs before Zuhr and four after, Allah, the Mighty and Sublime, will forbid him from the Fire." (Sahih) [Sunan an-Nasa'i, Book 20, Hadith 217]

[3] Abu Bakr bin 'Umarah bin Ruwaibah narrated that his father said:
"I heard the Messenger of Allah (pbuh) say: 'No one will enter the Fire who prays before the sun rises and before it sets.'" [Sunan an-Nasa'i, Book 5, Hadith 40]

[4] Jundab b. 'Abdullah reported Allah's Messenger (pbuh) as saying:
He who prayed the morning prayer (in congregation) he is in fact under the protection of Allah. And it can never happen that Allah should demand anything from you in connection with the protection (that He guarantees) and one should not get it. He would then throw him in the fire of Hell. [Muslim, Book 5, Hadith 329]

[3] Imaam Hasan bin 'Ali Radiyallahu 'Anhu reports that:
I asked my (maternal) uncle Hind bin Abi Haalab, who usually described particulars and conditions of Rasulullah Sallallahu 'Alayhi Wasallam. I was longing to hear something about it. On my asking, he described the mubaarak features of Rasulullah Sallallahu 'Alayhi Wasallam.

He said:
"All were regarded as equals amongst themselves. (A person was not regarded according to his lineage or genealogy). The virtues of one over the other was according to the taqwa (piety) possessed. The small ones were loved. The needy were given preference. Strangers and travelers were cared for" [Shama'il Muhammadiyah, Book 47, Hadith 336]

[2] It was narrated that 'Abdullah said:
"The Messenger of Allah (pbuh) said: 'Verbally abusing a Muslim is immorality and fighting him is Kufr (disbelief).'" (Sahih)  [Sunan Ibn Majah, Vol. 1, Book 1, Hadith 69]

[3] Ibn Mas'ud (RAA) narrated that the Messenger of Allah (pbuh) said:
insulting a Muslim is disobedience to Allah, and fighting with him is Kufr (disbelief).” [Agreed upon.] [Bulugh al-Maram, Book 16, Hadith 1487]

[4] On the authority of Abu Harayrah (may Allah be pleased with him), who said that the Prophet (pbuh) said:
Allah the Almighty said: I am as My servant thinks I am (1). I am with him when he makes mention of Me. If he makes mention of Me to himself, I make mention of him to Myself; and if he makes mention of Me in an assembly, I make mention of him in an assemble better than it. And if he draws near to Me an arm's length, I draw near to him a fathom's length. And if he comes to Me walking, I go to him at speed. (1) Another possible rendering of the Arabic is: "I am as My servant expects Me to be". The meaning is that forgiveness and acceptance of repentance by the Almighty is subject to His servant truly believing that He is forgiving and merciful. However, not to accompany such belief with right action would be to mock the Almighty. It was related by al-Buhkari (also by Muslim, at-Tirmidhi and Ibn-Majah). [Bukhari,

[5] 'Abdullah bin 'Umar bin Al-Khattab (May Allah be pleased with them) narrated that:
The third one said: 'O Allah! I hired some labourers and paid them their wages except one of them departed without taking his due. I invested his money in business and the business prospered greatly. After a long time, he came to me and said: O slave of Allah! Pay me my dues. I said: All that you see is yours - camels, cattle, goats and slaves. He said: O slave of Allah! Do not mock at me. I assured him that I was not joking. So he took all the things and went away. He spared nothing. O Allah! If I did so seeking Your Pleasure, then relieve us of our distress.' The rock slipped aside and they got out walking freely". [Bukhari, Book 1, Hadith 12]

[6] Narrated Al-Miswar bin Makhrama and Marwan:
The people of Quraish sent a message to the Prophet requesting him for the Sake of Allah and Kith and kin to send for (i.e. Abu Basir and his companions) promising that whoever (amongst them) came to the Prophet would be secure. So the Prophet sent for them (i.e. Abu Basir's companions) and Allah I revealed the following Divine Verses: "And it is He Who Has withheld their hands from you and your hands From them in the midst of Mecca, After He made you the victorious over them. . . . the unbelievers had pride and haughtiness, in their hearts . . . the pride and haughtiness of the time of ignorance." (48.24-26) And their pride and haughtiness was that they did not confess (write in the treaty) that he (i.e. Muhammad) was the Prophet of Allah and refused to write: "In the Name of Allah, the most Beneficent, the Most Merciful," and prevented the Mushriks from visiting the Ka'ba. Narrated Az-Zuhri: [Bukhari, Book #50, Hadith #891]

[2] It was narrated that Ash'ath bin Qais Said:
“There was a dispute between myself and a Jewish man concerning some land, and he denied me my rights so I brought him to the Prophet (pbuh). The Messenger of Allah (pbuh) said to me: 'Do you have proof' I said: 'No.’ He said to the Jews, 'Swear an oath.' I said: 'If he swears an oath he will take my property.' Then Allah, Glorious is He, revealed: 'Verily, those who purchase a small gain at the cost of Allah's covenant and their oaths, they shall have no portion in the Hereafter (Paradise). Neither will Allah neither speak to them nor look at them on the Day of Resurrection nor will He purifies them, and they shall have a painful torment.'” (Sahih)
[Sunan Ibn Majah, Book 13, Hadith 2411]

[1] Khabbab reported:
that al-As b. Wa'il owed debt to me. I came to him in order to demand that. He said: I will never repay you unless you belie Mubammad. I said: I would never belie Mubammad until you die and you are again raised up. He said: When I would be raised up after death, I would repay your debt when I would get my property and children back. Waki' said: This is how Almash has narrated and it was on this occasion that this verse was revealed:" Hast thou seen him who disbelieves in Our message and says: I shall certainly be given wealth and children' [19:77] up to" he would come to Us alone" [19:80]. [Muslim, Book #039, Hadith #6715]

[2] Narrated Khabbab:
I was a blacksmith and Al-Asi Bin Wail owed me a debt, so I went to him to demand it. He said to me. "I will not pay you your debt till you disbelieve in Muhammad." I said, "I will not disbelieve in Muhammad till you die and then be resurrected." He said, "Will I be resurrected after my death? If so, I shall pay you (there) if I should find wealth and children." So there was revealed:-- 'Have you seen him who disbelieved in Our Signs, and yet says: I shall certainly be given wealth and children? Has he, known to the unseen or has he taken a covenant from (Allah) the Beneficent? Nay ! We shall record what he says, and we shall add and add to his punishment. And We shall inherit from him all that he talks of, and he shall appear before Us alone.' (19.77-80) [Bukhari, Book #60, Hadith #259]

[4] It is narrated on the authority of Abu Huraira:
that the Messenger of Allah said to his uncle (at the time of his death): Make a profession of it that there is no god but Allah and I will bear testimony (of your being a Muslim) on the Day of judgment. He (Abu Talib) said: Were it not the fear of the Quraysh blaming me (and) saying that it was the fear of (approaching death) that induced me to do so, I would have certainly delighted your eyes. It was then that Allah revealed: " Verily thou canst not guide to the right path whom thou lovest. And it is Allah Who guideth whom He will and He knoweth best who are the guided" (xxviii-56). [Muslim, Book #001, Hadith #0038]