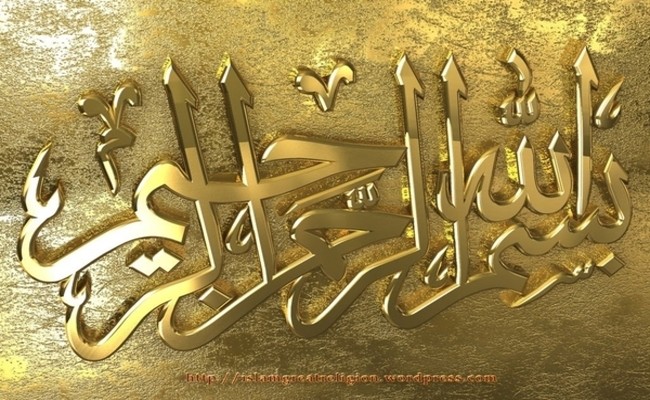 The Blessings of Saying Bismillah-ir-Rahman-ir-Rahim


(In the Name of Allah, the Most Gracious, the Most Merciful.)

Bismillah – The First Verse of the Quran (Mushaf)

“Bismillah-ir-Rahman-ir-Rahim” is the first verse of the first chapter (Surah Al-Fatihah) of the Quran. The fact that the word of Allah, the Quran, starts with this first verse, alone signifies the importance of this verse and further emphasizes the need to start all our tasks in the name of Allah (God).

Amongst the many benefits that Sheikh Modudi states in his Quranic tafseer of this verse, here are some of them:

(Saying bismillah) allows one to restrain oneself from any misdeeds, since the habit of pronouncing the name of God is bound to make one wonder when about to commit some offence and how such an act can be reconciled with the saying of God’s holy name.
When a person begins something by pronouncing Allah’s (God’s) name (with sincerity in his heart), he will enjoy Allah’s support and succor; Allah will bless his efforts and protect him from the machinations and temptation of Satan. For whenever man turns to Allah (God), Allah turns to him as well.

When one says “Bismillaah” before starting anything, it means, “I start this action accompanied by the name of Allah or seeking help through the name of Allah, seeking blessing thereby. Allah is God, the beloved and worshipped, to Whom hearts turn in love, veneration and obedience (worship). He is al-Rahmaan (the Most Gracious) Whose attribute is vast mercy; and al-Raheem (the Most Merciful) Who causes that mercy to reach His creation.” (Sheikh Muhammed Salih Al-Munajjid)

Hence this name (al-Rahmaan) often appears after the name Allah, as in the Quranic verse below:

Ibn Jareer (may Allah have mercy on him) said: “Allah, may He be exalted and His name sanctified, taught His Prophet Muhammad (S.A.W.S.) proper manners by teaching him to mention His most beautiful names before all his actions. He commanded him to mention these attributes before starting to do anything, and made what He taught him a way for all people to follow before starting anything, words to be written at the beginning of their letters and books. The apparent meaning of these words indicates exactly what is meant by them, and it does not need to be spelled out.”

Bismillah in Other Chapters of the Quran

WIth the exception of Surah At-Tawbah (9), all Surahs (chapters) start with Bismillah. Furthermore, Surah An-Naml in the Quran has another verse (number 30) that mentions Bismillah. The Quran states:

It was narrated that Ibn ‘Abbaas (may Allah be pleased with him) said:  The Messenger of Allah (peace and blessings of Allaah be upon him) said: “On the night on which I was taken on the Night Journey (Isra’), a beautiful fragrance came to me.  I said: O Jibreel, what is this beautiful fragrance? He said: This is the fragrance of the hairdresser of Pharaoh’s daughter and her children. I said: What is their story? He said: Whilst she was combing the hair of Pharaoh’s daughter one day, the iron comb fell from her hand and she said, ‘Bismillaah (in the name of Allah).’ The daughter of Pharaoh said: ‘My father?’ She said: ‘No. My Lord and the Lord of your father is Allah.’ She said: ‘I will tell him about that.’ She said: ‘Yes.’ So she told him and he summoned her and said: ‘O So and so, do you have a Lord other than me?’ She said: ‘Yes, my Lord and your Lord is Allah.’ He ordered that a baqarah(lit. “cow”) made of copper be heated up, then he ordered that she and her children be thrown into it. She said: ‘I have a request to make of you.’ He said: ‘What is your request?’ She said: ‘I would like my bones and my children’s bones to be gathered together in one cloth and buried.’ He said: ‘This will be done for you.’ He ordered that her children be thrown into it in front of her, one by one, until they came to the last one who was an infant boy who was still being breastfed. It was as if she wavered because of him, but he said: ‘O mother, go ahead, for the punishment of this world is easier to bear than the punishment of the hereafter.’ So she went ahead.” Ibn ‘Abbaas (may Allah be pleased with him) said: Four infants spoke: ‘Eesa ibn Maryam (peace be upon him), the companion of Jurayj, the witness of Yoosuf and the son of the hairdresser of Pharaoh’s daughter.

The Guidance to say Bismillah according to Hadith

We also observe that the prophet (S.A.W.S.) taught us to say Bismillah at the start of many tasks such as the following:

(There is no valid ablution for he who did not mention Allah's Name in it.)

This Hadith is Hasan (good).

Saying Bisimillah before eating and drinking

Also, the Bismillah is recommended before eating, for Muslim recorded in his Sahih that the Messenger of Allah said to `Umar bin Abi Salamah while he was a child under his care,

(Say Bismillah, eat with your right hand and eat from whatever is next to you.)

Some of the scholars stated that Bismillah before eating is obligatory.

Bismillh for belittling the Shaytan (Satan)

Imam Ahmad recorded in his Musnad, that a person who was riding behind the Prophet (S.A.W.S.) said, "The Prophet's animal tripped, so I said, `Cursed Shaytan.' The Prophet said,

(Do not say, 'Cursed Shaytan,' for if you say these words, Satan becomes arrogant and says, 'With my strength I made him fall.' When you say, 'Bismillah,' Satan will become as small as a fly.)

“Eat not (O believers) of that (meat) on which Allah’s Name has not been pronounced (at the time of the slaughtering of the animal)” Quran (Surah Al-Anaam, 6:121)

And the Prophet (S.A.W.S.) said: “If the blood (of the slaughtered animal) flows and the name of Allah is mentioned, then eat.”