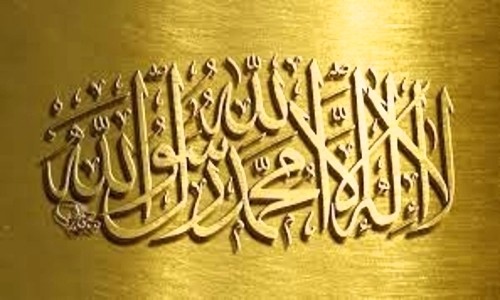 ALLAH’S CRITERION OF DIFFERENTIATION between BELIEVERS and UNBELIEVERS

Those who, Understand, Embrace and Declare;

I bear witness:
there is no god but ALLAH; Muhammad is the Messenger of ALLAH

The WITNESSES (who Testify) are The BELIEVERS

ALLAH, The Exalted Has Defined The ones who bear witness:

[ALLAH’S Quran – 57:19 – Abdullah Yusuf Ali] “And those who believe in Allah and His messengers- they are the Sincere (lovers of Truth), and the witnesses (who testify), in the eyes of their Lord: They shall have their Reward and their Light. But those who reject Allah and deny Our Signs,- they are the Companions of Hell-Fire.”

[ALLAH’S Quran – 3:53 – Dr. Laleh Bakhtiar] “Our Lord! We believed in what Thou hadst caused to descend. And we followed the Messenger so write us down with the ones who bear witness.”

[ALLAH’S Quran – 5:83 - Dr. Laleh Bakhtiar] “When they listen to what has been sent down to the Messenger, you see their eyes overflowing with tears, because of the Truth they recognize. They say, Our Lord, we believe, so count us among those who bear witness.”

[Muslim, Book #001, Hadith #0045] “It is narrated on the authority of Ubadah b. Samit that the Messenger of Allah (may peace be upon him) observed: He who said:" There is no god but Allah, He is One and There is no associate with Him, that Muhammad is his servant and His Messenger;”

[Bukhari, Book #74, Hadith #281] “ Narrated Ibn Mas'ud: Allah's Apostle taught me the Tashah-hud as he taught me a Sura from the Quran, while my hand was between his hands. (Tashah-hud was) all the best compliments and the prayers and the good things are for Allah. Peace and Allah's Mercy and Blessings be on you, O Prophet! Peace be on us and on the pious slaves of Allah, I testify that none has the right to be worshipped but Allah, and I also testify that Muhammad is Allah's slave and His Apostle. (We used to recite this in the prayer) during the lifetime of the Prophet , but when he had died, we used to say, "Peace be on the Prophet."